Light Volume Rally Through Next Week. Resistance At SPY 125 Will Hold.

Yesterday, the market took a breather after rebounding the prior two days. Germany’s GDP grew at a much slower than expected .2% and that set a negative tone in Europe. Traders were hoping for good news from the meeting between Italy and Germany and the press conference did little to excite.

Germany said that it might consider a Eurobond in the future, but it would only consent if strict fiscal policies are enforced. That means each country would have to agree to a standardized set of rules. If this were done decades ago, the concept would be plausible. Unfortunately, many nations are deeply in debt and they are straddled with structural problems. No matter how hard PIIGS try to climb out of the hole, entitlement obligations will pull them back in.

The notion of a Eurobond might calm nerves temporarily, but it will never come to pass. Interest rates in Germany and other stronger nations would spike and anti-EU demonstrations are popping up. With each passing month, the credit crisis will grow. Spain and Italy could require upwards of €2 trillion in bailouts and the landscape has changed dramatically. The banter between countries will escalate and Europe will become more and more fragmented.

Austerity programs throughout Europe are starting to take their toll on growth. Germany has been the cornerstone and now it appears that their activity is slowing down as well. When workers are laid off, they worry about their own well being. Opposition is growing and Prime Minister Merkel is losing her popularity.

The US was downgraded last week, France could be downgraded and Japan could face another downgrade if it can’t control deficit spending. Japan has the highest debt level of any industrialized nation in the world. Tax revenues would not cover interest expenses if yields rise by a mere 1.25%.

Moody’s lowered its GDP forecast for the US yesterday. It now expects 2% growth in 2011. That represents a 1% decrease and it means that tax revenues will decline by approximately $1 trillion. The Congressional Budget Office (CBO) projected 4% GDP growth when it calculated our national debt forecast. This means they are already off by $2 trillion this year alone.

President Obama is taking a 10 day vacation in Martha’s Vineyard. When he returns he will unveil his next master plan for jobs. We can only hope that this one is better than high-speed passenger rail from Chicago to St. Louis, cash for clunkers and cash for caulkers.

This morning, PPI came in at .2%. That is relatively benign and it won’t impact the market. CPI, Philly Fed, initial claims and LEI will be released tomorrow. I suspect the numbers will have a slightly bullish bias.

Earnings season has ended and the economic news next week is fairly light (durable goods, GDP). Trading volumes have declined and the activity should stay quiet next week. Traders are taking time off as they prepare for a busy fall.

I believe this bounce will exhaust itself next week. As the SPY reaches 125, it will hit resistance. I have been selling out of the money put credit spreads in August and they will expire Friday. I do have a few September positions on and I’m not looking to add.

In September, economic conditions will deteriorate and a lack of progress in Europe will spark credit concerns. When this rally runs out of steam, I plan to sell out of the money call credit spreads.

Look for a bullish bias in next week and a half. The action today should be positive and the volume will be light. You can trade the upside, but keep your size small.
I am staying on the sidelines so that I can get a few rounds of golf in before September. I’ve made a lot of money this summer and I don’t want to give any of it back when the volume is light. 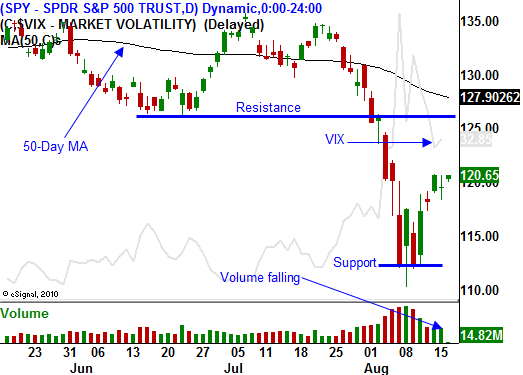