Credit Concerns, Economic Activity and Earnings All Weigh On the Market. Shallow Bounce Is Bearish.

This week, the market tried to recover from a nasty decline. Traders were hoping for some shred of good news during the emergency meeting between Italy and Germany. An upbeat press conference did little to calm nerves.

Germany said that it might consider the concept of Eurobonds if universal fiscal policies are forged/enforced. With 17 member nations, this process would take years to hammer out. In most cases, countries are straddled with structural problems that can’t be resolved. This “anchor” is pulling them down so quickly that austerity won’t suffice. Massive entitlement reforms are required before budgets can remotely be balanced.

Spain and Italy could require upwards of €2 trillion in funding and the bailout landscape has changed dramatically. France could suffer a downgrade because it is backing weaker EU members. In Germany, Prime Minister Merkel is losing her popularity because citizens don’t want to back “Club Med”.

Germany has been a cornerstone of activity in the EU and this week they posted horrible growth in Q2. GDP rose by a mere .2% and that was much worse than expected. Austerity programs are starting to take their toll. As workers lose their jobs they will be angered by the thought of bailing out Spain and Italy.

European officials are still vacationing and fear is escalating. This morning, European banks are tanking on credit concerns. The approach to the problem has been very casual and there is no sense of urgency. One small country like Finland can upset the apple cart because unanimous votes are required for additional bailouts.

Yesterday, the market started off in a very positive note. The S&P 500 was up 12 points and the rally lost its steam late in the day. Sellers unloaded stocks and the market reversed. That weakness has carried over this morning.

Yields in China rose overnight and that could be signaling another interest rate hike. Inflation is a primary concern and the People’s Bank of China has been slamming on the breaks with both feet. They are less concerned with an economic slowdown and they are with inflation. In two weeks, China will release its PMI and I believe it will fall. The entire world has been counting on them to pull us out with this recession and a decline in economic activity could send us all into a “double dip”.

Initial jobless claims rose 9,000 and we are back above the 400,000 level. Core PPI came in relatively hot at .4% yesterday. This morning, the CPI jumped .5% and inflation worries are weighing on the market.

Overnight, NTAP posted earnings. They missed guidance and said they were on track until the last month of the quarter. Analysts believe that economic activity slowed dramatically in July and that will hurt Q3 earnings across the board.

The credit crisis continues to escalate and world leaders are on @#$%% vacation. There is no one to offer solutions or calm nerves. To an extent, there aren’t any “quick fixes”. This problem has been brewing for decades and it is coming to a head.

Earnings and economic news is light next week. The momentum favors the downside and the bounce this week was very shallow. From a technical perspective that means the market is going to test the downside.

I have been selling August put credit spreads and they are WAY out of the money. The premiums were rich and I was able to distance myself from the action. Fortunately, they will expire tomorrow and I will have a clean slate to work with.

Trading volumes have declined and moves will be exaggerated. I did not have any short positions on and I don’t plan on jumping aboard this morning. Option premiums are very expensive and the S&P 500 is already down more than 30 points. If I were to buy puts I would be exposed to a snap back rally and a decline in IV. It is too risky to enter a new position after a big move and I will wait for a better entry point.

Economic conditions will soften and credit concerns will escalate in coming weeks. The brief, shallow bounce tells me that the lows from last week will soon be tested. 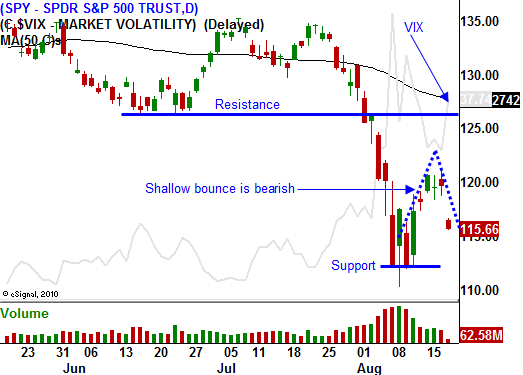