China’s PMI Will Set the Tone For the Week. Selling Pressure Remains Strong.

Last week, the market declined on credit concerns and weak economic releases. Global leaders are vacationing and potential solutions are miles away.

Stocks in Europe tanked Wednesday night and a negative tone was set before the open. A weaker than expected initial jobless claims number and hotter core inflation added to the selling pressure. The final blow was delivered 30 minutes after the open when Philly Fed missed expectations by a huge margin. The market was down more than 60 S&P 500 points by the end of the day.

Once the market decline gained traction, option expiration on Friday became a factor. Sell programs were triggered and they pushed stocks even lower. We are just above support and I suspect we will see a little bargain hunting this week. The bids will be small and one negative news event could lead to a breakdown.

Tonight, we will get a flash reading for China’s PMI. They have been tightening progressively and it fell below 50 last month signaling economic contraction. I am expecting a weak number. Tomorrow, Europe will release its flash PMI reading. Conditions have been deteriorating and last week Germany reported .2% GDP growth. They have been the activity cornerstone for the EU. The market will struggle to get through these two reports.

The economic numbers are fairly light the rest of the week. They include durable goods, GDP and initial claims. Stocks are already priced for bad news.

Financial leaders will meet at a conference in Jackson Hole and this is the biggest event of the week. Ben Bernanke will speak and traders are expecting “sweet nothings”. They want the Fed to stimulate the economy. This ray of hope could keep a small bid to the market, but any buying will be very tenuous. Most analysts feel that Fed action is nothing more than a placebo.

The EU is scrambling for solutions. It will take months if not years to forge fiscal spending policies and that is a prerequisite to issuing Eurobonds. Consequently, even if Eurobonds were a consideration, they would not calm nerves because of the timeline. Any ESRA solution will be months away and it will require a unanimous vote by all EU members. Important auctions will be held in coming weeks. Italy has €150 billion to refinance in the next month.

In the US, fiscal spending has ended and now we have entered the era of austerity. This double whammy will weigh on economic activity. Quantitative easing was ineffective and traders feel that the Fed is out of bullets. Deteriorating conditions will add to the deficits.

Investors are worried and they are heading for the exits. There is a feeling of helplessness. EU credit solutions are non-existent and a double dip recession seems inevitable.

Investors are selling assets as fast as they can and the market continues to slip. This morning, the S&P 500 opened 12 points higher. Since the opening bell there has been a steady drift lower and the selling pressure is heavy. Stocks are cheap, but no one will stick their neck out until major issues are addressed.

If China’s flash PMI comes in benign, stocks could rally on light volume this week. Conditions have been slipping, but I am not expecting a free fall in China. On the other hand, an ugly number will push stocks down to the low (SPY $110).

I am cautiously holding onto a handful of September put credit spread positions. If SPY $110 fails, I will buy them back. As mentioned last week I have not been adding. My August put credit spreads expired last Friday and even though I had to sweat a few of the positions out, they expired and I made nice money.

If we get through the PMI numbers, I might sell a few more put spreads. I do not want to load up.

Look for signs of support. I would like to see a couple of positive days with buying into the closing bell. Option implied volatilities are extremely high and you should be favoring selling strategies. Stocks are cheap and I feel comfortable selling out of the money put credit spreads.

Look for selling pressure early in the day. If stocks can hold by mid-afternoon, we will see a small rally into the close. Keep your size small and wait for signs of support.

If the market continues to slip, stay away. I would not buy puts and I would not sell calls spreads. A snap back rally would crush these positions and you need to wait for a failed rally before entering bearish trades. 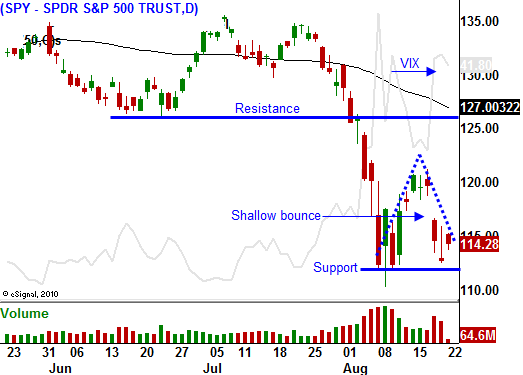