Decent PMI’s In China and Europe Will Lead To A Bounce. Jackson Hole Will Also Provide A Bid – Sell

The market has been in a steady decline. It has been pressured by credit concerns and deteriorating economic conditions. In the absence of good news, investors are bailing out of stocks. Worst case scenarios are priced in and the SPY is sitting just above the lows established two weeks ago.

Overnight, China’s flash PMI was released. It improved by .5 over last month and it rose to 49.8. Many analysts were bracing themselves for a decline and this number was much better than expected. China revised its Q3 GDP estimate by .3%. It now expects growth of 7.5%. That is still robust and exports only account for 25% of their activity. An emerging middle class is helping the country to maintain growth.

The Eurozone PMI also came in better than expected at 51.1. That still represents economic expansion and stocks rallied on the news.

Spain held a €2 billion six month bond auction and yields fell by half a percentage point. The ECB and China were active and the bid to cover was 3.6 versus 2.2 in July.

The economy is not falling off a cliff. ISM manufacturing and ISM services are still above 50, indicating economic expansion. Initial jobless claims are hovering around 400,000 and while job growth is negligible, conditions are not tumbling. This week we will get durable goods orders and the first revision to Q2 GDP. These releases will be relatively benign.

Many analysts are expecting Ben Bernanke to outline possible stimulus when he speaks in Jackson Hole this week. This “ray of hope” could attract bargain hunters. Personally, I feel the Fed is impotent. No matter what action they take, it won’t increase economic activity.

Stocks are cheap and they are priced for an economic crash. Option implied volatilities are high and bearish sentiment is extreme. I believe the market is ready for another bounce. This time, it needs to rally above SPY 120 to validate SPY 110 as a major support level.

Unlike the last few days, there is actual news that traders can sink their teeth into today. Each prior bounce was nothing more than short covering and light bargain hunting. The buying was quickly exhausted and sellers started hitting bids.

I believe the market will grind higher and the momentum will build late in the day. Tomorrow we could see another rally. The flash PMI readings in Europe and Asia will attract buyers. I also believe that initial claims will come in around 400,000 and some of the fear will dissipate.

I am starting to sell more September put credit spreads today. Basic materials and industrials have been pounded and they are cheap at this level. I am distancing myself from the action by selling out of the money puts. Additionally, I am selling strike prices that are below support. This will give the position added protection. If that support is breached, I will buy the spreads back. If support at SPY 110 fails, I will buy my put spreads back.

Look for a rally into the closing bell. 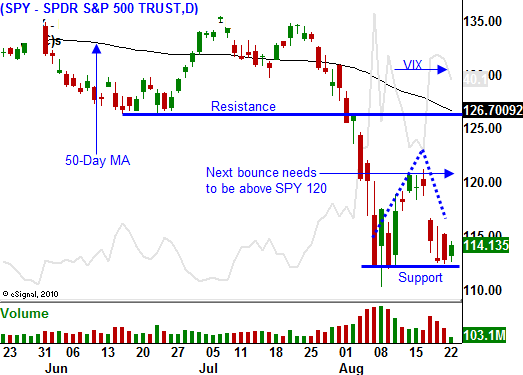