The Market Should Be Able To Drift Higher This Week. Landmines Ahead – Keep Positions Small

Yesterday, the market staged an impressive rally. Based on the news Monday night, I suspected we would get a nice bounce. Once the market establishes a direction, it continues throughout the day.

Overnight, Japan’s debt rating was lowered to Aa3 by Moody’s. They had signaled this action a few weeks ago and their rating now matches S&P. This news was largely expected and it did not have a major market impact. Moody’s said that another downgrade is unlikely in the next 12 to 18 months.

This morning, durable goods orders increased 4%. That was better than expected and the S&P 500 rallied on the news. Worst case economic scenarios are priced into the market. I believe conditions will continue to deteriorate in coming months, but the current market decline is ahead of itself.

Tomorrow initial jobless claims will be released. They have been hovering around 400,000 during the last four weeks. This is not a good number, but it is not disastrous either. Friday, the first revision to Q2 GDP will be released. The initial shock from last month has traders bracing themselves and any surprise will be to the upside.

Not much else has changed today. Traders are looking for positive comments from the Fed Chairman when he speaks in Jackson Hole this Friday. They are not expecting any policy changes, but he might reference some of the “bullets” he has left in his gun.

Interest rates in Europe have stabilized. Greece is meeting with Finland to discuss the collateral that will be pledged in exchange for future bailouts. Finland has stated that it will not participate in future bailouts unless the loans are backed. As I’ve been mentioning, one little EU member can upset the entire applecart because a unanimous vote is required.

The credit crisis will continue to escalate, but the reaction so far is overdone. Interest rates in Spain and Italy have retraced and that is a positive sign. The EU needs to quickly get its act together when officials return from vacation. I doubt this will happen, but the market should take comfort knowing that European leaders will soon be back at the helm.

China’s flash PMI and the Euro zone flash PMI were better than expected. Global economies are not falling off of a cliff and that news sparked a short covering rally yesterday.

This bounce needs to rise above SPY 120. If it does, it will validate support at SPY 110. On the other hand, if the market can’t penetrate the highs from last week, it will quickly retest support.

The economic news this week should have a positive tone. I believe stocks will be flat today and up tomorrow. I have been selling out of the money put credit spreads in September. I like basic materials stocks and industrials at this level.

Don’t go overboard selling puts. There are major economic releases next week and the market will have to tiptoe through a series of landmines. 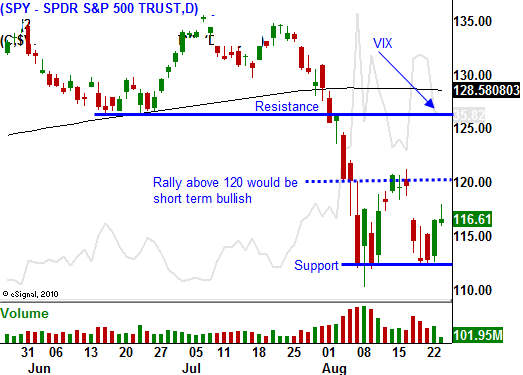