Berkshire Provides A Shot In the Arm For Financials. Price Action Looks Positive.

Monday, the market reversed from a higher open and support at SPY $112 was tested. That level held and stocks have been able to grind higher the rest of the week. Worst case scenarios are priced in and economic releases have been better than expected.

Tuesday, China and the Eurozone released flash PMIs of 49.8 and 51.1 respectively. Both were much better than expected and global economies are not falling off a cliff. This news attracted buyers and stocks staged an impressive rally. Yesterday, that momentum continued and the market erased early losses and closed on its high.

Japan’s debt was lowered by Moody’s Wednesday to Aa3 and that cast a dark cloud over the market. The ratings agency had warned that it might downgrade and the news did not have a lasting impact. Moody’s also said that it will not downgrade Japan in the next 12 to 18 months and its rating now matches Standard & Poor’s.

Durable goods orders rose 4% last month. That was better than expected. This morning, initial claims rose to 417,000. That number seems problematic, but it is inflated by 8,500 workers who went on strike. With that adjustment, the number is in line. Tomorrow, the first revision to Q2 GDP will be released. The shock from the initial release has been absorbed and any surprise would be to the upside. Consequently, I feel stocks could rally into the weekend.

Many analysts thought that the Fed Chairman would outline possible stimulus when he speaks in Jackson Hole tomorrow. That sentiment has been waning throughout the week. The Fed does not typically like to announce policy changes during unofficial events. Furthermore, the FOMC just-released a statement two weeks ago and there were three votes against the current policy. I do not believe there will be any material statements tomorrow and I believe the market’s expectations have been lowered.

Next week we will get major economic releases (ISM manufacturing, ISM services, ADP, initial claims and the Unemployment Report). The two ISM numbers could be soft. Regional economic releases have fallen dramatically in recent weeks and ISM manufacturing could fall below 50 (economic contraction). As long as both numbers are close to 50, the market reaction should be subdued. The jobs data will not be as dire as many expect. Over the last four weeks, initial claims have not spiked. They have come in around 405,000. As I mentioned earlier, worst-case scenarios are priced in.

The economic releases won’t be great, but they won’t be catastrophic either. Stocks are cheap and Asset Managers will start buying now that support has been established. Traditionally, stocks rally ahead of major holidays and that will also help the price action next week.

Global credit conditions are dire, but we don’t have any defaults – yet. European leaders will soon return from vacation and that thought should calm nerves on a short-term basis. Interest rates in Italy and Spain declined this week and bond auctions went well. By the middle of September, credit concerns flare up again.

This morning, Berkshire Hathaway announced that it will purchase $5 billion worth of Bank of America preferred stock. The S&P 500 rallied 10 points on the news. This was the shot in the arm the market needed.

I am bullish over the course of the next two weeks and I have been selling out of the money put credit spreads. Growth in China is still intact and I like basic materials and industrials. These stocks have been trashed and the valuations are compelling. Option implied volatilities are high and this strategy has a nice edge.

Once this rally runs its course, we will get short. The market still has room to run and we will play this bounce. 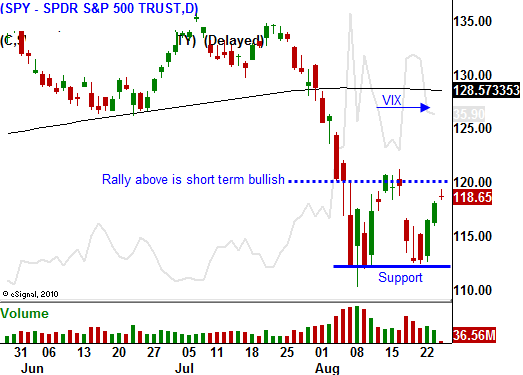