Stock Rally On Light Volume. Irene Not So Bad and Euro Banks Might Get Backing

Last Friday, the market sold off on the open after Q2 GDP was revised down to 1%. A slowdown in economic activity has sparked fear and it looked like we might be in for a nasty decline. By mid-morning, stocks bounced and they headed into positive territory. This reversal paved the way for a rally today.

In Jackson Hole, the Fed Chairman said that the FOMC meeting in a couple of weeks would be extended by a day. Traders feel that they will be table “easy money” alternatives during the two-day session.

Hurricane Irene caused a great deal of damage along the East Coast, but it could’ve been much worse. It was downgraded to a category one storm and insurance companies are reporting smaller than expected losses. Financial stocks are rallying this morning.

The London Times reported that the EFSF might be used to backstop European banks. They have been pounded on sovereign credit concerns the last few weeks and this has put a bid under the entire group.

The bottom line is that the market decline the last few weeks was overextended. Long-term conditions are dire. Economic activity is contracting and that will reduce tax revenues. Deficits will grow and the credit crisis will escalate. Investors don’t see any way that this can be avoided and they sold equities. Conditions are deteriorating, but they are not dire – yet.

Last week, I told you that the market was due for a bounce. We don’t have any defaults and politicians will say anything they can to calm nerves. With each passing day, fear subsided and bargain hunters opened their wallets. I believe we are at least 6 to 8 months (maybe more) from any potential meltdown. Stocks are cheap and they are the most attractive investment alternative with bond yields at historic lows.

China and Europe posted decent PMI’s last week. This week, we will evaluate domestic activity. Regional economic statistics have been very “soft” and that could weigh on Chicago PMI (Wed) and ISM manufacturing (Thurs). Jobs data will be released Wednesday (ADP) and Friday (Unemployment Report). I’m expecting job growth in the 75,000 range. That is the consensus estimate and I believe we will hit it. Initial jobless claims have been stable around 405,000 the last four weeks and that should bode well for job seekers. As long as economic activity is not falling off a cliff, the market will rebound.

Interest rates across Europe have declined and bond auctions have gone well. European officials will return from vacation and that will restore a false sense of security. They do not comprehend the magnitude of the problem and they will continue to muddle around. The EU will become fragmented as the need for additional bailout contributions grows.

The SPY is back above $120 and that is important. It validates support at $110 and the market has been able to rally through minor resistance. Major resistance lies at SPY 125 and that will provide a stiff headwind.

Tomorrow, the FOMC minutes will be released. Much has changed in the last month and the three opposing officials have probably changed their tone. I’m not expecting a big market reaction. Chicago PMI is likely to be weak on Wednesday, but ADP employment could offset the negative news. ISM manufacturing will weigh on the market Thursday and traders will be nervous ahead of Friday’s number. I believe the market will decline a little Thursday and rebound Friday.

The hurricane has crippled New York and trading activity is light. There is also a national holiday in the UK. As the week wears on, the volume will stay light into Labor Day. The market tends to rally ahead of holidays and I’m still expecting positive price action as long as stocks don’t get too far ahead of themselves.

Option premiums are rich and we can expect the VIX to decline this week. I have been selling out of the money put credit spreads on commodity stocks and industrials. If you’ve taken my advice, you’re doing well on these trades.

This rally needs to run its course. When it starts to falter, it will be time to buy puts. We might have a week or two of positive price action and then deteriorating economic conditions and credit concerns will resurface.

Look for the market to edge its way higher this week. 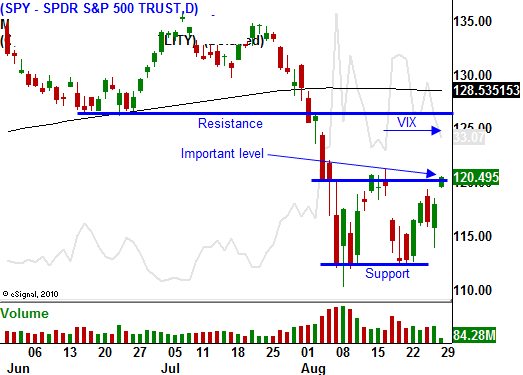