Choppy Action the Rest of the Week. SPY 120 Holds and Stocks Move Higher After Labor Day

Last week, the market showed signs of support. The ultimate test came Friday when Q2 GDP was revised down to 1%. Stocks tumbled on the news and it looked like we were in for a nasty day. By mid-morning, buyers surfaced and they pushed stocks higher. The market staged a reversal and that impetus spilled over into Monday’s trading.

Yesterday, bargain hunters were out in force and the S&P 500 rallied more than 25 points. Minor resistance at SPY $120 was penetrated and that validates support at SPY $110.

The European credit crisis is the most critical puzzle piece at this moment. Over the weekend, the London Times says that the EFSF might back European banks. That news calmed nerves and stocks pushed higher. Bond auctions in Spain and Italy have gone well (backed by the ECB) and yields on the 10-year have dropped back to 5.22%. European officials will return from vacation and that will restore a false sense of security. On a very temporary basis, this news should support a rally.

On a longer-term basis, EU officials have no sense of urgency. Long-term plans to finance bailouts have not been drafted and conditions can change in a moment. One little country like Finland can upset the entire applecart since a unanimous vote is required for additional bailouts. Greece met with Finland last week to discuss loan collateralization. As the stakes increase, so will the dissension. Strong, fiscally responsible nations don’t want to bail out “Club Med”.

In the US, economic growth is slowing. The key word is “growth”. We are still in positive territory and activity is not falling off a cliff. Next week, President Obama will present his next brainstorm for job growth. We can only hope that it does not involve “cash for clunkers”, “cash for caulkers” or high-speed passenger rails from Chicago to St. Louis. His plan will probably extend payroll tax credits. That will not create jobs, but it will be “market friendly”.

This morning, consumer confidence declined much more than expected. It came in at 44.5, the lowest level since April 2009. People are scared and that is why we saw record outflows from equity funds this month. This afternoon, the FOMC minutes will be released. After the last few weeks of economic releases, I’m certain that the dissenting voters have softened their hawkish views. I am not expecting a big market reaction.

Tomorrow, ADP employment will be released. Initial jobless claims have hovered just above 400,000 for last few weeks and I believe the number will be “light” but not disastrous. This positive news should offset a negative Chicago PMI. Regional data (Empire Manufacturing and Philly Fed) has been weak and the Midwest should follow suit. On Thursday, initial claims should be decent, but a weak ISM manufacturing number could weigh on the market. If it falls below 50 (quite possible) it would signal economic contraction and the market will have a negative reaction. Traders will get nervous ahead of Friday’s Unemployment Report and they will take profits made during the recent rally.

Analysts are expecting 73,000 new jobs and I believe we will be close to that figure. The market will rebound from the decline on Thursday and the SPY will finish the week above $120. Stocks typically rally into holiday weekends and that will be a positive influence for the market.

The recent market decline started with the debt ceiling fiasco. That was resolved and the hopes are high for the “Super Committee”. That optimism will remain for at least a few weeks. Our debt rating was downgraded by Standard & Poor’s and Asset Managers have adjusted positions. Fitch and Moody’s both plan to maintain their AAA rating. Augusts’ selloff gained momentum when economic conditions rolled over. That initial decline sparked fear of a “double dip” recession. Last week, Europe and China posted decent flash PMI’s and global economic activity is not falling off a cliff. The banter in Europe is elevated, but interest rates in Italy and Spain have dropped back to reasonable levels. All of these factors are contributing to the current market rally.

I still believe that economic conditions will continue to deteriorate. It will not happen overnight, but the signs of a “double dip recession” will grow. Global austerity programs will reduce economic activity. Credit concerns in Europe will grow quickly and member nations will not take the necessary steps.

Option implied volatilities are high and I have been selling out of the money puts in September. If you took my advice last week and did likewise, you are in great shape. After yesterday’s rally, I am satisfied with my current positions and I am not adding.

The market has made a nice rebound and I like the breakout above SPY $120. Stocks should be able to tread water today, but I believe they will come under pressure Wednesday and Thursday. That should set-up for a nice little rebound on Friday.

Last year, stocks rocketed after Labor Day and I believe some traders will remember that rally. For the reasons mentioned above, the price action next week should be positive.

In a few weeks, this rally will exhaust itself. We will be lucky to get back above SPY $125. The back drop this year is MUCH different and when option IVs decline into the 20’s, we will have a put buying opportunity. I believe the market will come under pressure again in a few weeks and that will last into October.

You can sell September put spreads. Take advantage of the holiday weekend and declining IV’s. Focus on strong stocks with solid support levels. We should be able to get through September expiration without a major meltdown, but after that, the price action could get ugly again. 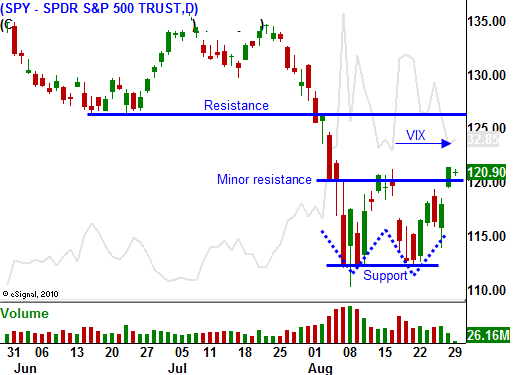