This Rally Is Getting Close To Resistance – Watch For Late Day Selling!

The news was generally good overnight and the market staged an impressive rally. The S&P 500 futures were up more than 20 points in early trading. Those gains are starting to evaporate and profit-taking has set in.

Perhaps the biggest news came from Europe. The Financial Times reported that Europe’s top bank regulators are trying to push through a proposal where the EFSF would guarantee bond sales. Furthermore, Germany’s Cabinet approved the summit decisions from a month ago and EFSF powers will be expanded.

As I expected, ADP employment came in better than expected and 91,000 jobs were created in the private sector. Chicago PMI fell to its lowest level since November 2009, but it was better than analysts had expected.

There are rumblings within the Fed that we could see another round of quantitative easing. Even if this happens, I don’t believe it will stimulate the economy. QE2 was ineffective.

This morning, President Obama outlined his plan for job growth. He wants Congress to approve further spending on infrastructure. In other words, let’s keep doing what isn’t working. I was hoping for reduced business regulation or tax relief on overseas profits brought back into the US (tied to hiring).

Yesterday, stocks rallied nicely and it looked like we would have excellent gains. Late in the day, stocks gave back everything and the S&P 500 finished unchanged. That type of price action indicates resistance. This morning, the S&P 500 was up 22 points and it hit a brick wall. The futures pulled back 10 points. This is very “toppy” price action.

The volume is low and stocks typically rally into holiday weekends. The SPY is within striking distance of resistance at $125. I believe the headwinds will start blowing soon.

Don’t rush into put purchases, but start lining up your shorts. The market has pushed through minor resistance at SPY 120 this week and the momentum is strong. Interest rates in Europe are declining and that is a positive sign.

Option implied volatilities will decline over the long weekend and time decay will also hurt long option positions. On the flipside, this will help our short put positions.

Last year, a huge market rally started in September. That thought still lingers in trader’s minds and I believe the market still has a little upside. Conditions are much different this year. The credit landscape has changed dramatically now that Spain and Italy are in the fray and economic conditions are deteriorating. Last year, activity was still strong.

I would not add put credit spread positions at this time. You should have been entering these trades the last two weeks. This rally is getting a little “long in the tooth” and we need to watch for signs of weakness. The price action in the last hour of trading will be very telling. Aggressive selling will signal that this bounce has run its course. 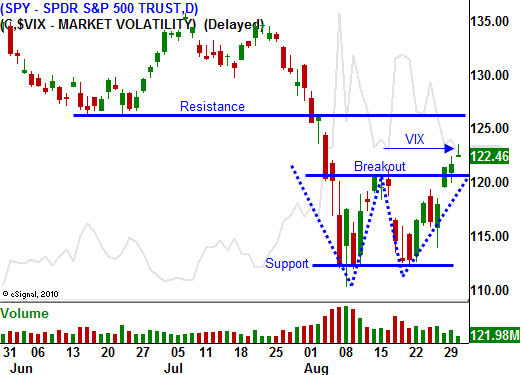