Weakness Today and A Rebound. This Rally Has One More Week Before it Hits A Wall

Yesterday, stocks rallied after a decent ADP employment index and a better-than-expected Chicago PMI. The S&P 500 was up more than 20 points in early trading. By mid-morning the momentum evaporated and profit-taking set in. The price action looked a little toppy, but the market should be able to move higher over the course of the next week.

Overnight, China and Europe released their PMI’s. China’s was in line, but inflation ticked higher. In Europe, activity was softer than expected and the PMI fell below 50 indicating economic contraction. In particular, Germany was weak. Their markets are trading lower and this could weigh on our market today.

Initial jobless claims were in line with expectations. Last week’s number was revised upwards and this week’s number was a little better than expected. The bottom line is that initial claims are hovering above 400,000. Economic activity is not falling off the cliff, but it’s not growing either. Tomorrow, the Unemployment Report will be released. Analysts are expecting 73,000 new jobs and I believe we will be in the ballpark.

After the open this morning, ISM manufacturing will be released. Regional data (Empire Manufacturing, Philly Fed, and Chicago PMI) were very weak and I believe it could fall below 50 indicating economic contraction. The market will not like this news and we will test the downside. Traders will also get nervous ahead tomorrow’s jobs number. Look for some selling today.

Stocks have a tendency to rally into holiday weekends and I believe the market will rebound tomorrow. There are a number of positive influences that will guide stocks higher. Interest rates in Italy and Spain are stable and with the help of the ECB, bond auctions went well this week. Next Thursday, President Obama will reveal his employment plan. Traders will be looking for an extension of payroll tax credits and that will be market friendly ahead of his speech. Leaders in Europe will return from vacation and Congress will be back in session.

End of month/beginning of the month fund buying will keep a bid to this market. A year ago, stocks started a massive rally in September and traders will remember that strength. Stocks have another week to move higher.

These positive influences are temporary in nature. The EU is dysfunctional and they have not been able to forge bailout policies. Credit problems will continue to grow and they will get caught “flat-footed”. Economic conditions will continue to deteriorate and that will keep constant pressure on the market.

I have been selling out of the money put credit spreads in September and those positions are working out nicely. I don’t plan on adding at this time. The extended weekend and a gradual market rally will force option implied volatilities downward. This will set up an excellent put buying opportunity heading into a seasonally weak period for the market.

Start lining up your shorts, but don’t jump the gun. We want this rally to exhaust itself. Watch for failed intraday rallies and late date selling.

Ride out your put credit spreads and be patient.

Through Labor Day I am running a huge SPECIAL OFFER on my Level 1 Option Report. It is up more than $15K since May and the subscription is 25% off. This service only buys puts and calls and it has been on fire! It normally costs $169.95/qauarter. Sign-up now for just $126.95/quarter.
.
.
. 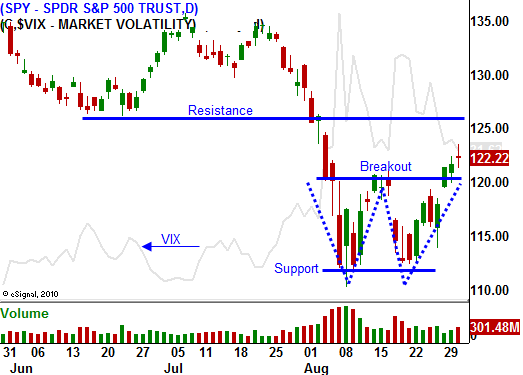