Bad news is stealing the spotlight and there is no escaping it. The biggest concern is Europe.

Greece has not conformed to austerity measures and it might not get the €9 billion tranche of funding it needs in a few weeks. This would send it into immediate default. I don’t believe the ECB will let this happen, but they are flexing their muscle.

Italy passed an austerity program a month ago and in good faith, the ECB supported its bond auctions. Interest rates declined temporarily and nerves were calmed. Now, Italy is backing out from some of the measures and interest rates are back on the rise.

The EU is very fragmented and anti-bailout protests are on the rise. Finland wants Greece to collateralized loans and that has thrown a cog into the entire process. The EFSF needs to raise additional funds for future bailouts now that Italy and Spain have entered the fray. Before it can do so, it needs to hold another vote. Ideally that would take place in October, but Slovakia says that it will not vote until December. A unanimous vote is required and one small nation can hold the entire EU hostage.

In Germany, Prime Minister Merkel lost a local vote and her popularity is waning. She has supported the bailout and if she cannot hold on as Chancellor, it will be a sign that Germans no longer support sovereign bailouts. Their GDP only grew .2% last quarter and with unemployment on the rise, workers will be more concerned about their own state of affairs. This Thursday, the German court will vote on whether or not the EFSF is constitutional. That should pass, but restrictions could be added and that would be bearish.

Basle III is a global effort to stabilize banks. Developed nations want to make sure that financial institutions have enough liquidity to shoulder a “run”. If passed, studies indicate that European banks will be €700 billion short. In fact, only 7 out 28 banks would pass (French banks have the weakest balance sheets).

The domestic news is not much better. I expected the market to benefit from end of month fund buying and President Obama’s “Jobs Speech” this Thursday. The market has zero confidence in his plan and that is not propping up the market. He will try to extend payroll tax credits to workers and he will try to implement employment tax credits for new hires. Corporations will be able to expatriate offshore funds at a low tax rate if they promise to hire workers. We are also likely to hear about a flat tax for corporations and a reduction in regulations.

Last Friday, the Unemployment Report sent a shock wave through the market. No jobs were created in August and analysts were expecting 80,000 new hires. The Labor Secretary blamed Republicans on CNBC. She said they are blocking all of the job creation initiatives that Democrats want to pass. This is ridiculous since Democrats controlled the House and the Senate less than a year ago. President Obama’s approval rating has fallen to 40% and his speech Thursday night will sound more like a campaign for re-election than a job solution.

Banks have been under pressure and they are likely to sign a deal with regulators. Robo-signing fraud could cost them upwards of $20 billion. The U.S. Postal Service will fall $5.5 billion short of funds this month. By the end of the year that deficit will grow to almost $10 billion. US pension funds are almost $400 billion short and the gap is wider than it was during the height of the financial crisis.

China’s foreign exchange official said that growth will fall below 9% in 2012. HSBC released its services PMI and it fell to 50.6 from 53.5. That is the lowest level ever recorded. Later this week China will release inflation data. If it comes in “hot”, another rate hike is likely.

People are worried. The unemployment rate has been above 9% or more than two years and there is no sign of relief. They are selling stocks and paying down debt. Tax credits are being used to improve personal balance sheets and the money is not being spent. Home values are down and decades of overspending are keeping a lid on economic growth. A study two years ago revealed that the average baby boomer has less than $100,000 saved for retirement.

The can has been kicked down the road for decades and the day of reckoning approaches. An aging demographic combined with underfunded pensions and entitlement programs are draining our nation. This is also happening on a global basis and people are realizing that hard times lie ahead.

From a trading standpoint, fear is high. The recent market bounces have been shallow and we are likely to test the August lows a third time. I have a fair number of put credit spreads and they are back to a breakeven situation. If the market cannot rally into the close today, I will start buying them back. I’ve had a profitable summer and I don’t want to give my gains back. I have benefited from the rally and time decay so the positions are not hurting me even though the stocks are slightly lower than they were when I entered the positions.

Rallies will always be tenuous from here on in. When we play the upside, we will be quick to take profits. The situation in Europe will continue to deteriorate. Long-term solutions will take years to develop and we only have a matter of months before we reach a tipping point. Put buying will also be difficult since implied volatilities will stay high.

This week, I suggest watching the price action. If we test SPY 110 and buyers come in before that level, there will be a put selling opportunity. You will have to be nimble. Should that level fail, you will need to reel in your put spreads quickly. Any rally back to SPY 120 will present a shorting opportunity. If premiums stay rich, sell out of the money call spreads in Sept and use the proceeds to buy OTM puts in October.

This is a week to evaluate, keep your size small and limit your risk. 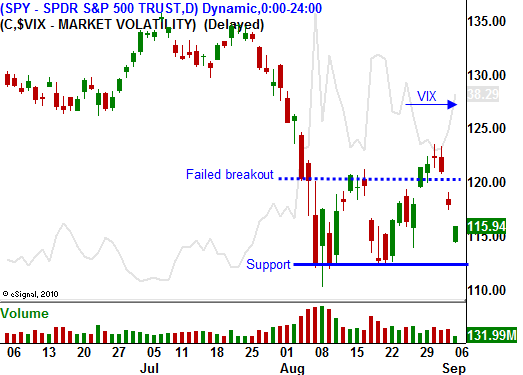