Germany Takes Hard Line With Greece. Critical Meeting Next Week. The First Default Is Getting Closer

Yesterday, stocks gave back gains from earlier in the week. Initial jobless claims rose to 414,000 and unemployment is a political focal point. Last night, President Obama revealed is “jobs plan”.

As expected, it offered corporate tax incentives for new hires, an extension and expansion of payroll tax reductions, infrastructure investment, an extension of unemployment benefits, a reduction in business regulation and free trade with Colombia and South Korea. These ideas have been battered around for months and the market is disappointed. There was no mention of a repatriation holiday and the tab is bigger than expected.

Republicans are less than thrilled with the plan. It was projected that this would cost $300 billion, but now that we have the details we know it will cost upwards of $450 billion. The burden for financing this plan was placed on the shoulders of the new “Super Committee”. They haven’t even addressed the $1.5 trillion in cuts they have to make by November and the task has grown.

Unfortunately, these plans won’t reduce unemployment. We’ve already tried payroll tax reductions and it has not helped. People are saving money, they are not spending it. Tax credits for new hires won’t accomplish anything either. Corporations are not going to add staff until they see an uptick in demand. An extension of unemployment benefits provides disincentive. Job seekers will not be as aggressive looking for work and they will hold out for higher paying jobs that will never materialize. Free trade and a reduction in business regulation will help and we should already be doing this (both parties agree).

Europe is in the spotlight again and conditions will continue to worsen. Greece is not close to hitting its budget targets and it risks not getting the next payment. The EU/ECB/IMF will meet on September 14th to discuss the status. Germany’s finance minister said there will be no more funds if they don’t hit the targets. If Greece does not get the funding, we will have our first “dead body” (default).

Next week, Italy will vote on their $45B austerity plan and it will hold a bond auction on Tuesday. Italy’s interest rates are starting to creep higher again and this is a bearish sign. Wednesday, the IMF/EU/ECB will return to Greece to discuss funding. On Thursday, Spain will hold a bond auction. These events will have a major impact on the market.

European banks could be required to take “haircuts” on sovereign debt. This would mean that they need to raise capital. If Basel III were enforced, only 25% of the banks would pass. The problems run deep and Euro credit concerns will keep pressure on the market.

Overnight, China’s CPI declined slightly. Industrial production and retail sales were robust. Their growth is still intact and this will keep some buyers engaged.

Next week, PPI, CPI, retail sales, initial claims, entire manufacturing, industrial production, consumer sentiment and Philly Fed will be released. Inflation will be tame and manufacturing will be soft. Overall, these releases will weigh on the market.

Traders are still holding out hope that the Fed will act when it meets in two weeks. “Operation Twist” is a rumored proposal whereby the Fed purchases longer-term debt and it sells short-term debt. This won’t stimulate the economy, but it will provide a bid to the market for the next week and a half.

Asset Managers will start buying dips in anticipation of a year-end rally. Stocks are cheap and the third-year of a presidential term is typically bullish. There will be plenty of news that will pressure stocks and I believe we will see choppy price action within the established range during the next month.

The situation in Greece could be coming to a head very quickly. Next week’s meeting is critical. If Greece does not get funding, the market will break below the lows of the year. I don’t believe the EU/ECB is ready to let that happen yet. Keep a close eye on this situation. If Greece does get the next tranche of funding, it will set up an excellent put credit spread opportunity.

The market looks weak and it will probably close on the lows today. We are likely to see weakness right up until the IMF/EU/ECB meeting with Greece next Wednesday. I am not entering new positions. My put credit spreads are in decent shape with a week left and I will ride them out. I am waiting for a drop to the low end of the range so that I can sell October put spreads on support. It all depends on Greece right now.

My thoughts and prayers go out to those who suffer from the 9/11 attacks 10 years ago. 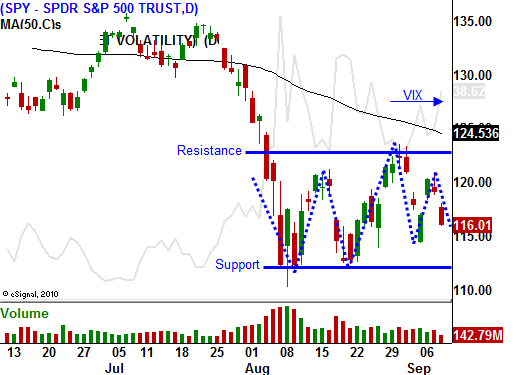