Weakness Ahead of Greek ECB/EU/IMF Meeting. They Probably Get Funding With Strong Warning

Last week, the market declined on European credit concerns. By now, you should be familiar with this theme. Every time stocks try and advance, the rug gets pulled out from under. Conditions are deteriorating and this pattern will exist for a long time.

Greece has been getting bailout money under the pretense that it will trim spending. It will not come close to hitting established targets and Wednesday the IMF/EU/ECB (“troika”) will meet in Athens. A few days ago, Germany’s finance minister said that Greece will not get aid if it does not meet its targets. Stocks around the world declined on the news.

Since this is the biggest market influence this week, let me address it. I believe European officials will take a very hard line with Greece this week. By the end of the month it will run out of money and it desperately needs this next tranche to avoid default. They will get the money, but future payments are in jeopardy. This will give Germany/France a couple of months to shore up contingency plans and they will beef up bank balance sheets in their respective countries. This “game” will come to an end in the near future. Greece won’t be able to meet objectives and Europe will eventually let it default. The anger/frustration is mounting and smaller nations (Finland or Slovakia) could oppose additional funding.

When Greece secures this payment, the market will rally. Option implied volatilities are very high and there is a nice edge to selling out of the money put credit spreads. Stocks are cheap and economic conditions are not falling off a cliff. The third-year of a presidential term is historically bullish. Asset Managers will be looking to scoop stocks ahead of a year-end rally and many believe the Fed will come to the rescue when it meets next week.

The backdrop is much different this year and I am not looking for a massive rebound that will challenge the highs of the year. However, we will get a nice steady rally into November. By the second or third week of earnings season, stocks will soften. The “Super Committee” will be challenged to cut budget deficits by $1.5 trillion. That is not a big hurdle, but politics will impede the process. Thanks to President Obama, they will be searching for another $500 billion in spending cuts. This will finance his “jobs plan”. By the middle of November a number of other events will come to roost.

Three months ago, Moody’s started evaluating Italy’s debt. Many analysts believe that a downgrade will be forthcoming in the next few weeks. Italy and Spain will both hold bond auctions this week and we need to watch the results carefully. Interest rates in both countries are back on the rise.

French banks could also be downgraded by Moody’s in the next few weeks. They are heavily exposed to “Club Med” debt. If Basel III is enacted, 7 out of 28 European banks would pass reserve requirements.

Global austerity measures will start to impact economic growth. We will see a gradual decline around the globe and earnings guidance will be cautious.
This week, there will be a number of economic releases. PPI, CPI, retail sales, initial claims, Empire Manufacturing, industrial production, consumer sentiment and Philly Fed will be released. Inflation will be tame and manufacturing will be soft. Overall, these releases will weigh on the market.
The price action heading into Wednesday’s meeting will be weak. Traders will error on the side of caution and they will reduce risk. If by chance Greece does not secure financing, fasten your seatbelt. This will be the first default and stocks will tank. The lows of the year will be taken out quickly and implied volatilities will spike. In this scenario, you should also have a short or two in mind. Sell out of the money call spreads and use the proceeds to buy out of the money put spreads.

I don’t believe European officials will let this happen – yet. I’m not willing to take new positions until I see how this plays out.

I am short September put credit spreads. These positions were safely out of the money Friday and I still have plenty of breathing room. Now that we are in the last week of the expiration cycle, I should be able to manage risk. Last month, stocks declined during the week of expiration and risk levels are elevated.

I have an extensive list of put credit spreads opportunities lined up and as soon as Greece secures financing, I will be executing October put credit spreads. There won’t be much time to enter these trades and you need to have them lined up ahead of time. Once the relief rally begins, stocks will take off. Option implied volatilities are high and I would discourage call buying. As the market rebounds, premiums will collapse and you will be trying to swim upstream.

Get ready for a busy week. Distance yourself from the action and sell out of the money put spreads if Greece gets its money. 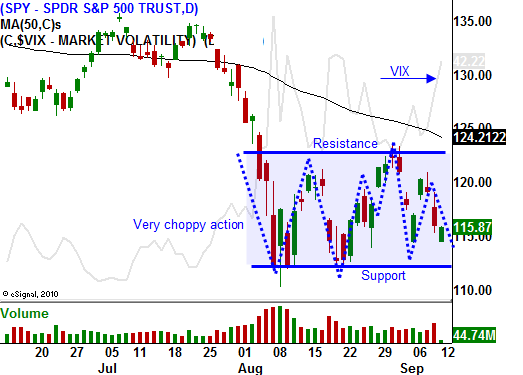