We Are Right In the Middle of the Range. – Wait For the Market To Hit An Extreme

Yesterday, stocks started off on a positive note and the rally continued throughout the day. That pattern has been prevalent the last few weeks and it leads to overextended moves in both directions. This is the first morning in over a month where the market is relatively flat.

German courts decided that the EFSF was constitutional and that sparked a relief rally Wednesday. This was largely expected and the courts added that Germany’s parliament needs to have a greater voice in future decisions.

European credit concerns have temporarily subsided. However, Greece will miss budget targets, Italy is reneging on austerity measures, Spain feels it will need bailout money and 75% of European banks would fail Basel III requirements. The credit crisis is growing and the EFSF needs to raise funds immediately. One small nation like Finland or Slovakia can upset the entire process. This powerful undertow will keep a lid on the market.

Tonight, there will be a major event. The prior two Super Bowl winners will square off. Just before that, President Obama will reveal his “jobs plan”. I am intentionally downplaying the President’s speech because the market does not care. Last week, I thought we would see some optimism and positive price action ahead of his speech. Traders are expecting the “same old, same old”. Unemployment benefits will be extended along with payroll tax credits. That has been ineffective so far and it will not create new jobs. We will probably hear about tax credits for new hires, but corporations are not going to add to payrolls until they see an uptick in demand. Hopefully, there will be some mention of reduced government regulation and tax relief for overseas profits that are brought back into the US.

As we saw in yesterday’s GOP debate, jobs will be the focal point for the 2012 Presidential Election. Republicans are backing domestic drilling and the President would be wise to get behind this plan. It will create jobs and it will reduce our trade deficit.

The FOMC will convene in two weeks and the meeting has been extended from one day to two days. Traders believe that the Fed will launch a new initiative “Operation Twist”. They will buy long-term bonds and sell short-term bonds under the proposal. I don’t believe this will stimulate economic growth, but the event will be “market friendly”.

Stocks are cheap and this action by the Fed should keep a bid to the market. Asset Managers will buy stocks in anticipation of a year-end rally.

This morning, initial claims hit 414,000. That is slightly higher than expected and unemployment is ticking higher. The ECB also released a statement. Analysts expected a softer tone and they were disappointed (European markets sold off on the news). Tonight, China will release its CPI. Expectations are for it to decline slightly. If it comes in “hot”, an interest-rate hike might be right around the corner.

The market is chopping around in a range and I believe we will test the downside couple more times in the next month. Support should hold and we will see a muted year-end rally. Normally, the third-year of a presidential term is bullish because the incumbent reaches across the aisle. I don’t believe that will happen this year.

Obama continues to blame Republicans for the current problems yet he has few solutions. Both parties are polarized and with Perry as the front runner, the gap is wider than ever. In November, the “Super Committee” has to cut $1.5 trillion in spending. If they are not making progress before the deadline, the market will decline.

Conditions this year are much different than they were a year ago. Major European countries are now lining up for bailouts. A year ago it was just little old Greece. Global economic conditions are starting to deteriorate and austerity measures will accelerate the slowdown in coming months.

Option implied volatilities are high and I prefer selling strategies. I am not adding to new positions at this time. My September put credit spreads are in great shape and I will ride them out. If we get a pullback to SPY 112, I will sell October put credit spreads. We are right in the middle of the range (SPY 112 – 125) and I consider this “no man’s land”.

Be patient and wait for the market to get to one extreme or the other. When that happens, I will provide instructions. At this time, no trade is the best trade. 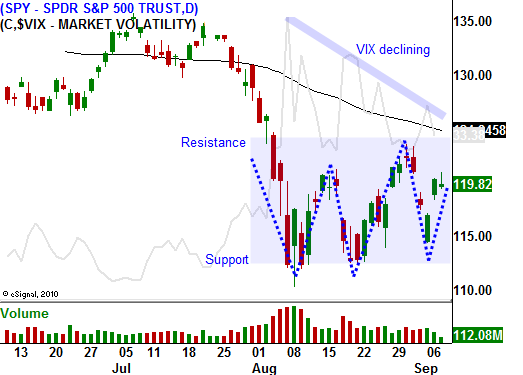