Yesterday, stocks edged higher and support is holding ahead of major European events. Today, the IMF/ECB/EU will meet with Greek officials in Athens. They have not hit budget targets and the rhetoric will be harsh. Greece needs the next tranche of payments since it will run out of money by the end of the month.

Sensing danger, Greek officials instituted a personal income tax early this week. Citizens will have to pay the tax or risk having their electricity turned off. This drastic measure will generate enough revenue for it to come close to budget targets and it might be enough to satisfy the EU/ECB/IMF (troika).

It is unthinkable that Euro officials will let the country default at this stage. That would quickly send a shockwave throughout Europe. A more likely scenario is that Greece gets its funding along with a warning. European countries will use this reprieve wisely and they will beef up domestic bank balance sheets. Dissension among stronger nations is growing and it’s just a matter of time until Germany “cuts the cord”.

Overnight, Moody’s downgraded a handful of French banks. That move was largely expected and if anything, the downgrades could have been more extensive. If Basel III policies were enacted, 21 out of 28 European banks would be undercapitalized. France itself risks a downgrade every time it finances bailouts.

India and Brazil are considering European investments. This would temporarily support bond auctions and fear would subside. China said it will consider European investments if austerity measures are taken. They do not want to subsidize reckless spending.

Economists and analysts are weighing in on President Obama’s “jobs plan”. At most they believe it will create 150,000 new jobs. It will cost $450 billion to create these jobs. If the proposal is passed (unlikely), the budget deficit will grow quickly and another debt ceiling debate might be required before the 2012 election. From a purely political perspective, Republicans should pass the plan. It won’t create new jobs and the President will have to sweat out another potential default. Also, he won’t be able to point fingers a year from now since his plan was executed in full.

Today, retail sales were flat and so was the PPI. Consumers are saving money and this release was slightly negative. Initial claims, Empire Manufacturing and industrial production will be released tomorrow. I believe the news will have a slightly negative bias.

Tomorrow, Spain will hold a bond auction. Interest rates are on the rise and traders will be evaluating the demand. We should also be hearing from the troika and we will know if Greece will secure the next payment. Traders are already assuming that it will get the next tranche.

The market wants to move higher. Stocks are cheap and Asset Managers are nibbling. They want to get long ahead of a year-end rally and the third-year of a presidential term is historically bullish. This bid will strengthen in coming weeks. Once we get past this round of funding (Spanish/Italian debt auctions and Greek bailout payments), the market will have a two-month reprieve from euro credit concerns. That should set up a nice rally into November.

Each rally from this point on will be smaller in magnitude. Euro credit concerns will grow in coming months and that will keep a lid on the market. Businesses and consumers will be cautious and that will weigh on economic activity.

Option premiums are rich and this is a great time to sell out of the money put credit spreads in October. I am putting on a few new positions today and I will get more aggressive tomorrow if Greece secures funding. I am looking for stocks that have been in an uptrend the last few weeks. In particular, the stocks have held recent gains and there is a strong support level below. I am selling the put credit spreads below that support so that I have added protection if the market declines.

Start putting on a few new positions today and look for put selling candidates. You should get busy entering trades Thursday and Friday if the market starts moving higher.

I would not be a call buyer. Premiums are very rich and you will be swimming upstream. Aggressive accounts can use some of the money from put credit spreads to finance the purchase of calls or call debit spreads.

Look for a positive bias today. 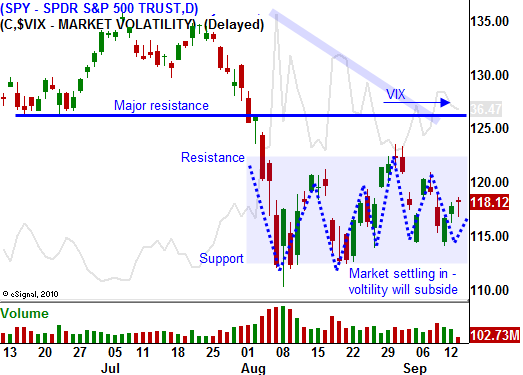