Weakness After the FOMC. Buy A Few Puts and Be Ready To Add.

Yesterday, the market pulled back on European credit concerns. The news was not too damaging and I was surprised to see selling ahead of the FOMC’s decision on Wednesday. Analysts are expecting the Fed to take action and this should be bullish for the market.

I suspected we might see a late day rally and that is exactly what happened. Rumors circulated that Greece had secured its next round of funding and stocks rebounded. Today, the news is negative and the market continues to push higher. Standard & Poor’s downgraded Italy’s debt rating overnight. Analysts were expecting the news any day and now Italy has been moved to the front burner.

Interest rates in Italy spiked to their highs of the year. It is the third largest economy in the EU and this is a warning sign. The ECB does not seem overly concerned and they are quickly marching closer to a flashpoint.

Europe wants emerging markets (BRIC) to support their bond auctions. China has already stated that it will only do so if fiscal spending is reduced. CNBC reported that the Bank of China has stopped foreign exchange forwards and swaps trading with several European banks. Last week, Moody’s downgraded many of them. Institutions have not rolled over short-term debt to the tune of €50 billion. European banks where experiencing a liquidity crunch and Central Banks stepped in last week. They will lend dollars through the end of the year.

This was a good news/bad/news event. The banks will have the liquidity they need, but it shows how fragile the situation is. All of these developments are a warning sign. We will be lucky to get through the year without testing the lows.

The IMF lowered its growth forecast for the US. It trimmed GDP by 1% for 2011 and 2012. This might not sound like much, but it equates to $1 trillion in tax revenue each year. When politicians raised the debt ceiling, they did not want it to interfere with 2012 elections. Given the new outlook and Obama’s “jobs plan”, we might have to raise the debt ceiling a year from now and go through the process again.

The economic news this week is light. As I mentioned earlier, the FOMC should provide a slight bid to the market. However, no one really believes that the Fed has any “teeth”. QE2 was ineffective and “Operation Twist” won’t spark a recovery. On the flip side, no action by the Fed would spook investors. Either way, I believe the market will decline on the news. If they do something, the market will rally and when it stalls in a day or two, there will be a great shorting opportunity. If they do nothing, the market will tank immediately. I suggest buying a few puts ahead of the decision with the intent of adding quickly. You might take a little early heat if the Fed acts, but you will have a chance to add to the position at better prices. Don’t go overboard!!

The economic news will be weak during through the rest of the month and that will weigh on the market. We also run the risk of earnings warnings as Q3 approaches. We will see one more push lower before earnings season. That will set up a buying opportunity in the second week of October.

The news today was much more negative than it was yesterday. Stocks feel tired and I believe there will be selling into the closing bell. Consider buying a few puts today. 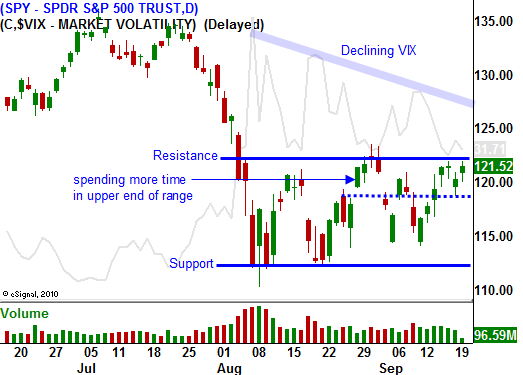