Rally this Week – Pullback Next Week. That Decline Will Set-up A Great Buying Opportunity.

Yesterday, stocks rallied throughout the day and they closed near the high. European credit concerns have temporarily subsided.

The EU is considering a $3 trillion “grand bargain” that will fortify bank balance sheets and prevent contagion. This dialogue indicates that European officials might finally be grasping the magnitude of the situation. Consequently, stocks are rallying on the rumors.

This “grand bargain” will never come to pass and it certainly won’t solve long-term structural problems. First of all, every nation would have to approve such action. The EU will be voting to ratify the expansion of the EFSF in the next week. This proposal was drafted July 21 and it has taken more than two months to schedule voting. Germany is the cornerstone and they will vote on Thursday. The EU moves at a snail’s pace and one small nation could create a roadblock. Analysts expect the EFSF votes to go well, but this demonstrates how difficult it is to get a minor proposal passed.

EU members (some of which are broke) will be expected to fund the “grand bargain”. Strong nations will have to “pony up” and they are likely to lose their triple-A credit rating. If the EU can’t internally fund the program, they will sell bonds to the rest of the world. China has already stated that they will not commit unless they see structural reform. Who is going to finance this?

All the money in the world won’t solve the problem. Entitlement programs are draining sovereign balance sheets and alarming rate and an aging demographic will quickly expand deficits in coming years. This bucket has a giant hole in it and until you fix it, nothing else matters.

From my perspective, all of these proposals are just talk. They might temporarily calm nerves and bargain hunters will scoop stocks into year-end. We saw this same type of proposal in Europe last fall and it led to a massive rally. Months later, the dust settled and traders realized that nothing changed.

At the same time that credit concerns are growing, the economy is faltering. Last week, Europe and China posted weak flash PMI’s. They were below 50 indicating economic contraction.

Domestic economic releases have been slipping. This week GDP and durable goods will be released. This is the final revision to Q2 GDP and I am not expecting any surprises. Initial claims continue to creep higher and the four-week moving average is on the rise. This does not bode well for next week’s Unemployment Report.

Corporations circle the wagons during the debt ceiling debacle and I believe that “soft patch” will filter through the economy in coming weeks. Investors will fear a “double dip recession” and we will retest the lows.

With each passing week, the bid will grow as Asset Managers bargain hunt into year-end. I am expecting a rally into earnings season and it should last a few weeks. The upper end of the trading range will be tested.

Stocks are likely to grind higher for a few more days. We are seeing “end of quarter window dressing” by mutual funds. European nations will vote to expand the EFSF and Greece will approve property tax increases. These positive influences will push the market higher.

Next week, we will get a dismal round of economic releases in the market will pull back.

I am selling out of the money put credit spreads. I want to distance myself from the action. Once we get the pullback to support next week, I will buy calls in anticipation of an earnings rally. The stocks at the top of the Live Update Table today are your best bullish candidates. Monitor the strength for each stock this week and be ready to scale into positions on a market pullback.

Today’s price action has been relatively flat. The market spiked higher and it has traded in a narrow range since the open. I don’t believe we will see a grind higher like we did yesterday. Sell some out of the money put spreads and wait for an opportunity to buy calls in the next 10 days. 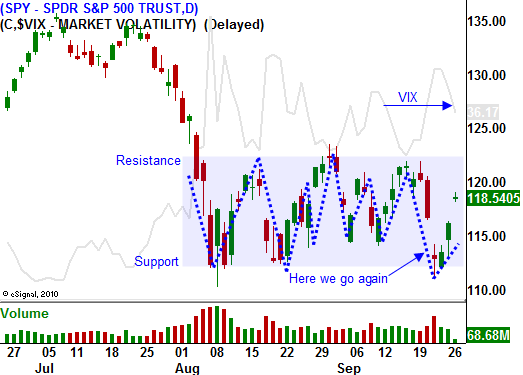