Decline Next Week Sets Up A Great Buying Opportunity. Get Your Longs Ready!

Yesterday, the market rallied on news that the EU was considering a “grand bargain” that would stabilize banks and prevent contagion. Supposedly, this was a US suggestion and it would require $3 trillion in funding. The market liked the fact that Europe might be grasping the gravity of the credit situation. Stocks rallied on light volume.

Late in the afternoon selling set in. A 30-point S&P 500 rally was almost erased and the reversal had a very eerie feeling. That selling momentum spilled over this morning and stocks are testing the downside. Germany has scoffed at the “grand bargain” concept and the EU is divided. Germany wants investors to take larger haircuts on sovereign debt before additional bailout money is granted and France disagrees.

Greece is waiting for its next bailout payment. The new property tax proposal barely passed (154/300) and that should pave the way for the next tranche. The ECB/IMF/EU will meet in Athens later this week and they will release a statement. Traders expect them to get the funding, but the tension is high.

This week many EU members will be voting on the EFSF expansion. The early votes are expected to go well; it is the smaller countries that will vote in a week or two that could be problematic. Overall, the news from Europe should be positive this week. The situation is tenuous and a new issue can arise at any moment.

Yesterday’s rally was sparked by end of quarter “window dressing”. That momentum faded quickly and today’s selloff might be partially related to Rosh Hashanah (“Sell Rosh Hashanah, buy Yom Kippur”). Durable goods orders fell .1% and that was better than expected. Initial jobless claims will be released tomorrow and they should come in around 420,000. That won’t be positive, but it won’t spark a selloff either. The final revision for Q2 GDP should also be a non-event.

Traders will start looking ahead to next week. ISM manufacturing, ADP employment, ISM services, initial claims and the Unemployment Report will be released. Initial claims have been creeping higher the last two months and labor statistics will be dismal. I feel that the debt ceiling debacle created uncertainty and corporations “clammed up”. That weakness will filter through next week and the market will test support.

With each passing day, the bid to the market will strengthen. The decline next week will set up an excellent buying opportunity. The rally this week quickly reversed the selling from last week. Buyers are starting to nibble and they will get more aggressive as earnings season approaches.

Yesterday’s market reversal would have resulted in a substantial decline a few weeks ago. Prices stabilized before the closing bell and the market was up in pre-open trading. This action is further evidence that support will hold.

We are likely to see weakness over the course of the next week. Start lining up bullish candidates. Take this opportunity to monitor them closely. Watch for stocks that hold up well when the market is selling off. Ideally, when the market stops falling, these stocks will instantly tick higher. I am selling out of the money put credit spreads on strong stocks this week. Next week, I will be buying calls when the market declines and finds support.

There are many crosscurrents and I am not looking for a massive year-end rally like we had last year. The EU is fragmented and they don’t have a game plan. Economic conditions will continue to soften and traders will be waiting for news from the “Super Committee”. The rally will start after next week and it will last into the first two weeks of November. After that, choppy price action will resume.

This could be the last good trading opportunity of the year. Be prepared.

Today’s price action will be choppy and the downside might get tested late in the day. No one will aggressively buy stocks ahead of the labor statistics next week. 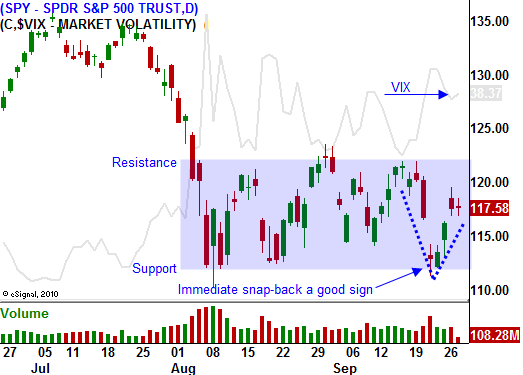