The Market Will Spend Time At the Low End of the Range. Sell OTM Put Credit Spreads!

Europe is long on talk and short on action. Officials are tabling dozens of strategies, but the EU is fragmented and a unanimous decision will be impossible to reach. The latest development is a master plan whereby banks are capitalized and a line of defense is drawn around “Club Med”. This effort would try to limit contagion.

Under the plan, Greece might be allowed to go through an orderly default. Most analysts believe its days are numbered and it can’t be saved. Almost half of the population works for the government and since the credit crisis, not one person has been laid off. In an act of desperation, Greece imposed a property tax to secure the next bailout payment. The EU/IMF/ECB did not confirm the next tranche and the market will wait nervously for the next two weeks.

Central Banks stepped in two weeks ago and they will provide dollar liquidity to European banks. This action shows how desperate situation has become. Global banks stopped conducting business with European banks and credit spreads were widening out. This is a precursor to a financial crisis.

Last week, Europe and China released their flash PMI’s. In both cases they were lighter than expected and they fell below 50 indicating economic contraction. Overnight, Asian markets were down on economic concerns.

The domestic economic news has also been light and discouraging. This week GDP and durable goods will be released. Both numbers will be weak, but I am not expecting a major market reaction. After the Fed’s “substantial risk” statement last week, the market has priced in worst-case scenarios.

FedEx posted decent earnings, but the outlook was dismal. CAVM, ANR and MCP warned of a slowdown and they warned that Q3 earnings will miss projections.

The market is testing major support at SPY 110. I believe that level will hold. Stocks should rebound slightly and a weak Unemployment Report will test support once more. As earnings season approaches, the bid will strengthen.

Asset Managers will look to scoop stocks ahead of a year-end rally. By the middle of October, the SPY will move back to the middle of the trading range and it will eventually challenge SPY 120. We might break out briefly, but resistance at SPY 125 should hold.

The bottom line is that choppy trading lies ahead the rest of the year. We need to trade the range and we need to be prepared for quick reversals. We are in for a real “tug-o-war”. Great stock valuations and low interest rates will face off against European credit concerns and slowing economic conditions.

I am selling out of the money put credit spreads this week. Implied volatilities spiked and I want to distance myself from the action. There are some great stock bargains and this strategy allows me to ride out the swings without breaking a sweat. I like commodities, healthcare and tech.

Scale into put credit spread positions. We are likely to see more weakness and I do not believe there will be an instant rebound. The market will spend time at the low end of the range and it will form a base over the next week or two.

The bounce this morning should hold and we might grind a little higher into the close. 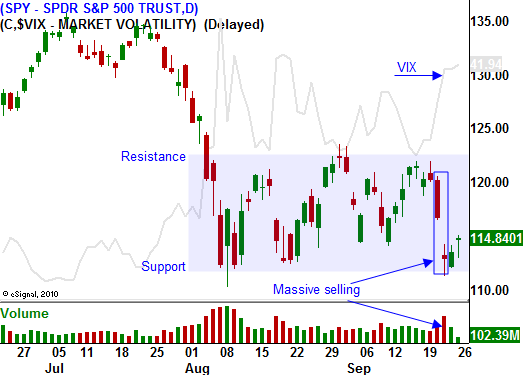