Buy the Next Dip. Weak Economic Statistics Will Weigh On the Market Next Week.

This has been another volatile stretch. Last week, the “substantial risk” phrase was included in the Fed’s statement, the market plunged. It tested support at SPY 112 and it rebounded early this week. That bounce was sparked by the notion that Europe is grasping the magnitude of the credit crisis. Rumors circulated that it is considering a “grand bargain”. Germany criticized that $3 trillion plan and it is not likely to happen. Consequently, the market declined sharply from its highs yesterday.

This type of choppy price action can be expected the rest of the year. In addition to credit concerns, deteriorating economic conditions are adding fuel to the fire. Now a slowdown in China is feared. Commodity prices fell dramatically this week and copper lost 7% yesterday.

Overnight, Germany voted to expand the ESFS. The margin of victory was convincing (523 in favor and 85 against). Additionally, Germany reported decent employment statistics and unemployment dropped for the fifth straight month in a row. The unemployment rate fell to 6.9%, a post-reunification low. This is a sign that economies are not falling off of a cliff.

The rest of Europe will be voting on the ESFS expansion in coming weeks. Slovakia will be the last country and it plans to vote in two weeks. This uncertainty will weigh on the market, but pressure from larger EU members will force their hand. This EFSF proposal was approved in July and it is a no-brainer. It has taken two months to pass and one small nation can disrupt everything. This shows how arduous the process is. If the EU is hit with a financial crisis, it won’t be able to react.

The EU/ECB/IMF will meet with Greece today. They are in desperate need of the next payment and that decision will be rendered during a meeting on October 13. Everyone expects Greece to get the funding, but tensions are running high. This week they barely passed a property tax increase (154/300) that will get them closer to their deficit targets.

Interest rates in Italy and Spain have stabilized, but they are creeping higher. If not for ECB intervention, these rates would be jumping higher. European banks are undercapitalized and Central Banks had to provide liquidity. The noose is tightening and a major problem could surface at any time.

As long as there aren’t any “dead bodies” (an actual default), I feel that support will hold. Asset Managers will start to get more aggressive with each passing week and they will try to scoop stocks ahead of a year-end rally. Earnings season begins in two weeks and the price action leading into it has been positive for eight straight quarters.

Initial jobless claims have been moving higher the last two months. This morning, they fell unexpectedly by 37,000 to 391,000. The final revision to Q2 GDP was also better than expected and it came in at 1.3%. Corporations “clammed up” during the debt ceiling debacle and that created a soft patch in our economy. It is possible that we are at the tail end of that weakness.

The market bounced sharply after testing support this week. That action tells me the next strong move is up. Earnings warnings have been minimal and expectations have been lowered. Companies should easily beat consensus estimates.

The world might feel like is falling apart, but corporate profits have been the one bright spot. Interest rates are at historic lows and stocks are cheap. This week we saw a massive rebalancing at the end of the quarter (window dressing). Fund managers sold bonds and they bought equities. I believe this rotation will continue into November.

I have been selling out of the money put credit spreads on strong stocks. That strategy allows me to distance myself from the action and I can take advantage of inflated option premiums. Next week, I will wait for market support and I will get more aggressive. I plan to buy in the money calls ahead of earnings season.

This could be the last good move of the year. Focus on stocks that weathered the recent market decline and have maintained their uptrend. These candidates can be found at the top of the Live Update table. Start lining up your bullish picks and enter a few trades today. I am expecting this rally to continue throughout the day. 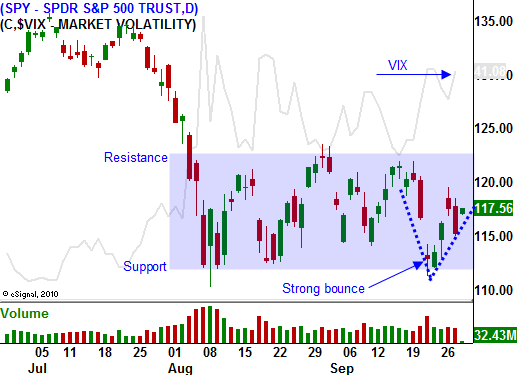