Wait For A Steep Intraday Decline and A Massive Reversal. Place Conditional Orders Ahead Of Time.

Yesterday, the market made a new 52-week low. The selling was constant and the futures are down 20 points since the closing bell.

Without question, stops were triggered and bears are jumping on the breakdown. Hong Kong was closed Monday and it is playing catch up. It was down 4% overnight and there is concern that local debt levels in China could be a problem.

In Europe, rumors are circulating that Greece will not get its bailout money until November. The good news is that they will get the money. Greece says they can meet payments until then.

European bank Dexia could wind up putting EU120B into a “bad bank”. Belgium and France just came out and said they will guarantee all of Dexia’s financing, standing behind depositors and creditors.

Dexia, BNP, and SocGen all resisted pressures from regulators to take larger haircuts on their holdings of Greek sovereign debt. Most banks have cut their Greek inventory to market prices but France’s two biggest lenders, along with Dexia, only cut the value by 21%.

In an article, the Financial Times discusses how “hedge funds are starting to make outright bets against France – the country’s bond yields have already broken away from Germany while its CDS is much higher. France’s banks are weak and if the state steps in to provide more capital, it will weigh on the sovereign’s spreads.

The landscape is depressing and fear is escalating. Believe it or not, I don’t want to see any early morning rallies. They just suck you in prematurely. I want to see the depths of despair. A deep air pocket will attract buyers and a snap back rally will establish support.

I think it is appropriate to discuss my trading approach at this critical juncture. Stocks have been badly beaten down on credit concerns in Europe. Conditions are deteriorating and on a longer term basis and I see big problems ahead.

That said, there were “housing bubble” concerns before 2008. Conditions were also deteriorating and we had a series of snap back rallies when there were not any “dead bodies”. Traders that shorted those relative lows were carried out in body bags. When IndyMac and Countrywide went under it was time to get short and stay short on the breakdowns.

At this juncture, we are in the “pre-housing bubble” stage. Greece will default in the future, but in a few weeks they will secure their next bailout payment. EU members are voting to expand the EFSF and that is also positive news. This week, the ECB could hint that interest rates will be lowered at the next meeting. The point is that there has not been a default and there will not be one this year.

Investors are also concerned about an economic slowdown. Corporations clammed up during the debt ceiling debacle and that soft patch made conditions seem worse than they are. That weakness has filtered through. Durable goods, GDP, initial claims, Chicago PMI and ISM manufacturing all came in better than expected. Last Friday, China’s PMI also beat expectations at 51.2. We are not falling off a cliff.

Stocks have rallied into earnings the last 8 quarters and Asset Managers will try to buy stocks ahead of a year-end rally. Last week, we saw rotation out of fixed income and into equities before the end of the quarter (window dressing). That rotation will continue.

Now let’s talk trading. Monday, the market made a new 52-week low on heavy volume. It continues to drift lower and lower. Investors have had 2 months to get out of stocks and the selling pressure with each subsequent decline will subside because they are already out. In the final stages of a bottoming process, strong stocks tank. Hedge funds and investors throw in the towel and they sell everything to meet margin calls. That has taken place and that sets us up for a capitulation low.

All of the pieces are in place for a snap back rally. It could happen today or it could happen in a few weeks. The worst thing you can do as an option trader is to try and short the market or stocks at this stage.

Option implied volatilities are sky high and the deck is stacked against put buying. Even if you are right, the profits will come slowly. If you are wrong, the market will snap back and premiums will collapse. You fret over short positions when that happens trying to figure out if the snap back is a head fake or the real deal. Meanwhile, your positions take a huge hit. When you finally do exit the positions, you are so focused on getting out that you miss getting long.

I’ve been through this many times in the last 25 years and I have learned that it is best to let the last 5% of the sell-off pass you by. Focus on getting long and wait for bullish signs (i.e. intraday reversal off of a deep decline). When it happens, you will know exactly what to do and you won’t be preoccupied by short positions.

An accurate forecast is critical and you have to know when the market is setting up for a bounce. There has not been a default and we will not have one in 2012. The next big move is up and I suggest staging orders ahead of this rally.

Place buy orders on strong stocks contingent on the SPY trading above 112. When that condition is met, the orders will trigger. As the market declines, lower your entry trigger. When the low is established and we get the bounce, the action will be fast and furious. You won’t have time to enter orders fast enough and stocks will be flying.

If you miss some of the downside in the next few days, don’t worry. It only means we will make more money on the snap back. These orders could be pending for a day or a couple of weeks. Only time will tell. In any case, be ready.

At this juncture, I have a few put credit spreads on. The positions are approaching the short strike and I may have to pull the plug and take some losses. I do not have a lot of risk exposure now and I don’t plan on adding until I see bona fide support.

I suspect that we won’t be waiting long. 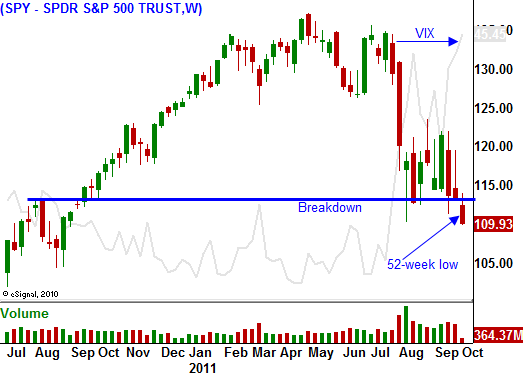