Mission Accomplished. We Bought the Reversal and the Rally Followed Through

Today’s comments were posted before the open and I will try to do that the rest of the week.

Yesterday, the market tested the downside early in the day. A small European bank (Dexia) said that it might take €120 billion write-down and the market tumbled.

This was the major overnight news event and I want to address it first. When I read the news, France and Belgium said that they would back all of the loans. This is a proactive step and it is exactly what our government did to stabilize US financial markets in 2008. Traders speculated that this could lead to a downgrade for France and the story had a negative impact on the market.

From my standpoint, they did exactly what they needed to do. When France becomes a credit concern, a full-blown credit crisis will be at our doorstep. We are nowhere near that point yet.

Rumors circulated that Greece will get its bailout payment in November. It would have liked that money sooner, but it said it can meet its obligations until then. Officials will meet in Athens on October 13th and it’s possible that a statement confirming the payment will be released at that time. This would be a very positive news event.

The ECB is meeting this week and traders are expecting dovish statements. If they hint that interest rates will be lowered before the end of the year – that would be bullish.

The key point is that there has not been a sovereign default and there won’t be one this year. Central banks are standing behind financial institutions and although many European banks have weak balance sheets, they will not fail this year.

The next major concern is an economic slowdown. China released its PMI last Friday and it beat expectations (51.2). Chinese officials are expecting a growth rate of 7.5% this year. That is less than last year’s growth rate, but China is clearly not falling off a cliff. The debt ceiling debacle created a soft patch in our economy and that weakness has filtered through. Durable goods orders, GDP, initial claims, Chicago PMI and ISM manufacturing exceeded analyst estimates.

Worst case scenarios are priced into the market and any surprise will be to the upside. If ADP exceeds 45,000 this morning, the market will jump higher. That move will continue after the ISM services number is released. The consensus estimate is 52.8 and I believe the number could be higher. Yesterday’s reversal will gain traction and shorts are ready to cover. If initial claims come in around 400,000 on Thursday, the market will stage a big rally ahead of Friday’s Unemployment Report.

Before I sound overly bullish, let me temper my comments. The market is oversold and fear is running high. We are entering a seasonally bullish period and concerns are overblown. I am not long term bullish; I am just looking for a nice rally.

Stocks have rallied into earnings season for eight straight quarters and Q3 kicks off next week. Asset Managers want to buy ahead of a year-end rally and the bid will strengthen with each passing day. Earnings have been the one bright spot during all of this turmoil and we will have a couple of weeks of good news.

Some of the strongest stocks this year have been trashed in the last week. That event usually comes towards the end of a selling cycle. Investors and hedge funds need to sell everything to meet margin calls and that culminates with a capitulation low. Investors have been selling stocks for the last few months and anyone that wanted to get out had ample opportunity. With each subsequent decline, the selling pressure subsides.

The market made a new 52-week low yesterday. Stops were hit and bulls were shaken out of their long positions. Bears jumped on the breakdown and quickly had the door slammed in their face. The S&P 500 rallied 40 points in the last 40 minutes of trading. As I mentioned yesterday, you have to have your orders placed ahead of time. Once the move happened, you didn’t have time to enter trades. If you tired, you were scrambling to lift offers that weren’t even there.

We got the reversal I was looking for and I hope you are long. I am expecting this rally to last the rest of the week and the SPY should have an easy path back to 120 before it finds resistance. If you did not get in, buy on any pullback. This move is just getting started, don’t wait. 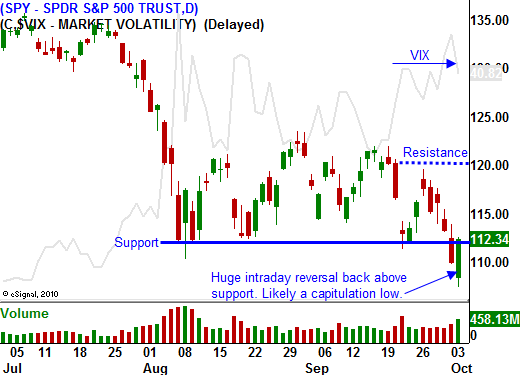