Any Surprise Will Be To The Upside This Week. Line Up Your Longs!

The news out of Europe continues to weigh on the market. Officials continue to drag their feet and the decision-making is very fragmented. Each EU member has to approve future bailouts and one small nation could disrupt the entire process.

Last week, rumors circulated that a “grand bargain” might be drafted. It would accumulate $3 trillion and the money would be used to fortify banks and to prevent contagion. Germany criticized the plan and dispelled rumors. The market quickly sold off after their statements.

The hope was that Europe has grasped the gravity of the situation and that they are considering a macro plan of action. Instead, they continue to drag their feet and put out small fires. This summer, interest rates in Italy and Spain skyrocketed. Fear escalated and European officials responded by going on vacation.

Greece is in desperate need of bailout money and the ECB/IMF/EU has yet to confirm the payout. The market does not like this uncertainty and the entire process has been painful to watch.

Last July, EU officials drafted a proposal to expand the EFSF. Two months later, EU members are still voting to approve the plan (this is a no-brainer). The process is extremely slow and there is no sense of urgency. Only 12 people work for the EFSF and that alone speaks volumes. This organization has a tremendous amount of responsibility and the EU has not added staff.

Imagine Europe getting hit with the likes of our financial crisis in 2008. By the time they called their first meeting, the crisis would be over because a financial meltdown would’ve already occurred. This lackadaisical approach has global investors very concerned. They are either clueless or incompetent. In either case, the outcome could spell disaster.

From an economic standpoint, worst-case scenarios are priced in. I believe any surprise will be to the upside this week.

Durable goods orders, initial claims, Chicago PMI and GDP all exceeded expectations last week. China released its PMI over the weekend (51.2) and it was better than expected. This morning, ISM manufacturing rose to 51.6. That was also better than expected and it is in economic expansion territory.

Corporations “clammed up” during the debt ceiling debacle in August. That soft patch has filtered through the economy and conditions should stabilize. If ADP comes in better-than-expected and initial claims improve, we could see a nice rally ahead of Friday’s jobs report.

Asset Managers rotated out of fixed income and into equities last week. They were adjusting portfolios before the end of the quarter (window dressing) and I believe this rebalancing will continue. Stocks are cheap and Asset Managers will try to get a jump on a year-end rally. The bid to the market will strengthen with each passing day.

We are at the low end of the trading range and a rebound is likely. Last week, some of the strongest stocks were trashed. It felt like liquidation and it’s possible that a number of hedge funds had to sell everything to meet market requirements. This type of price action usually occurs just before a capitulation low.

All we need from Europe is a sliver of hope. If other EU members pass the expansion of the EFSF, that will help. Greece is likely to secure its next payment on October 13th when officials visit Athens and that will help. The ECB meets this week and traders are expecting them to cut rates. Even if they suggest doing so in the future, the market will rally.

Traders are overly pessimistic and I believe we could see bona fide buying into earnings season. That will force shorts to cover and stocks will rebound.

I am not looking for a massive year-end rally. They are still too many unresolved issues.

This is a very tradable move and I suggest selling out of the money put credit spreads. Use the proceeds to buy calls. Option premiums are extremely expensive and you must incorporate option selling into your overall strategy.

This morning, stocks tested the downside and they have recovered nicely. I believe we will see strength into the closing bell. Passive accounts can sell out of the money put credit spreads and wait for signs of strength. You will have plenty of breathing room because of rich option premiums. Even if the market sells off, your trades will have lots of cushion. Aggressive accounts can sell put credit spreads and use the money to buy out of the money November calls now. I like buying November’s because these options will span earnings.

Strength into the close for 2 or more days would be bullish. A massive intraday reversal off of a deep decline would also be a bullish sign. Line up your longs and prepare for a rally. 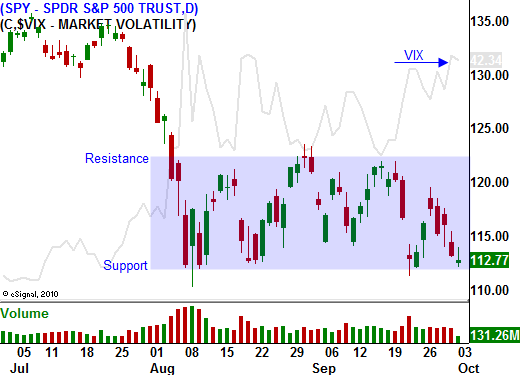