Focus Will Shift From The Economy To Earnings Next Week. Jobs Report – 50K+ Would Be Friendly

Yesterday, the market rallied on another dose of good economic news. Retail sales were better than expected and initial claims were up less than expected. The last 6 economic releases have beaten expectations and we are not falling off a cliff.

This morning, the Unemployment Report will be released. Consensus estimates are 60K new jobs in September. We know that 45K new jobs will come from Verizon strikers who returned to work in September.

The ADP report beat estimates two days ago and initial claims have been improving the last two weeks. Worst case scenarios were priced in and any surprise will be to the upside. I believe this number will be “market friendly”. Even if we miss by a small margin, we should not see a huge sell off.

Europe is drafting plans to support banks and the news from the ECB and BOE was dovish yesterday. The ECB did not lower rates, but the market reaction was still positive.

This morning, markets in Europe and Asia are down slightly. The S&P 500 is also down about 5 points and the price action is a little soft ahead of the jobs report.

Asset Mangers are buying stocks ahead of earnings season next week and they want to get a jump on the end of year rally. We will continue to see a rotation out of fixed income and into equities.

Next week, the ECB/EU/IMF will meet in Athens. If they confirm the next bailout payment to Greece, the market will rally. Interest rates in Spain and Italy are drifting lower and credit concerns are easing.

This rally will be tenuous and it still has a week or two of positive price action. Don’t expect a runaway rally – we won’t get one. There are still too many unresolved issues.

The resistance is light until the SPY reaches 120.

Shorts are covering and that will provide some upside momentum.

If the Unemployment Report “misses” by a small margin, try to weather the storm. Hang on to longs and start scaling out next week. If the S&P is down by more than 20 points after an hour of trading, take profits on half of your long positions today. We’ve had a great run and there is no reason to get greedy.
.
. 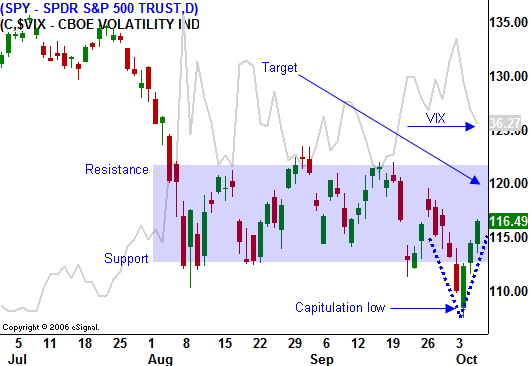