Key Votes Today Will Keep A Lid On the Market. Take Partial Profits On Long Positions

Yesterday, stocks ran higher on news that France and Germany will draft a bank bailout plan. Euro credit concerns were the only thing keeping a lid on the market. Once those winds stopped blowing, investors rejoiced. Stocks are cheap and economic conditions are improving slightly.

Unfortunately, the announcement from Europe lacks substance. We still don’t know the details of the plan or how it will be financed. Investors have been waiting for the EU to get ahead of the credit crisis and this was a step in the right direction.

A week ago, worst case scenarios were priced into the market and the S&P made a new 52-week low. An intraday reversal on heavy volume resulted in a capitulation low and stocks staged an impressive 10% rally. That momentum is still intact heading into earnings season, but the gains will be hard fought from this point on.

After the close, AA will release earnings. The market will pay particular attention to the guidance and traders will be gauging the demand for aluminum in China. Investors fear that economic conditions in Asia are slowing down. That has contributed to the selling pressure. I believe the forecasts will be soft, but not dire (China’s PMI was a decent 51.2). That will set the stage for a grind higher over the next week.

The only other big earnings release this week will come Thursday morning when JPM announces. Bank stocks have been beaten down and this is the strongest company in the sector. Any surprise will be to the upside.

Wednesday the FOMC minutes will be released. The overall tone was dovish and this news should be market friendly.

Slovakia will vote on the ESFS expansion today. Rumor has it that the first vote will fail and the second will pass. The troika (ECB/IMF/EU) said that Greece will get its next bailout payment in November. This news was expected, but the process was arduous. A clear message was sent to Greece and they need to execute austerity plans to secure future funds.

Today, the Senate will vote on the China FX bill. Even if it passes in the Senate, it won’t get through the House. This is not the time to piss off our largest debt holder.

President Obama’s jobs plan will also be voted on by the Senate today. No one is expecting it to pass. It will be broken into small pieces so that each component can be addressed separately.

Stocks have rallied into earnings season for eight straight quarters, make that nine. Asset Managers want to buy ahead of a year end rally and worst case scenarios were priced in. The news yesterday was not “big” enough to justify a 35 point S&P rally. Shorts were squeezed and they added fuel to the fire as they ran for cover.

I believe the market can still work its way higher, but overhead resistance is close at hand. In the next 10 days, the SPY will test the upper end of the trading range. After that, the action will get choppy.

We nailed the intraday reversal a week ago and we bought stocks “on the cheap”. TAKE PROFITS ON TWO-THIRDS OF YOU LONGS TODAY. This market rally is tenuous and bad news can strike at anytime. I suggest hanging on to your remaining long positions through the week.

Look for choppy trading today. The market will test the downside early and losses should be minimal. Traders will look to take profits after a nice run.
.
. 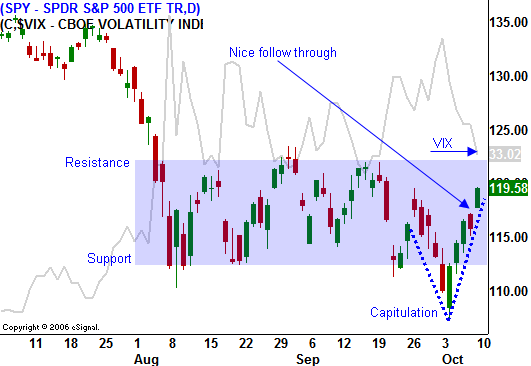