Yesterday, stocks reversed the losses from Monday and they continued to push higher throughout the day. Earnings releases after the close from Apple and Intel provided a bid. The market is very volatile and at a moment’s notice, it could swing either way.

A major development yesterday came from financial stocks. They had been declining after earnings releases and they reversed sharply during the day. This provided a foundation for the rest of the market. Banks are still fundamentally weak, but they are overdue for a bounce. As long as they can hold their own, the rest of the market can challenge resistance.

For the first time in years, Apple missed estimates. The earnings were still fantastic, but the stock pulled back $25 after the news. Intel reported great results and the guidance was strong. Of the two, this was a more significant release. Intel touches the entire tech sector and laptop/server demand was strong.

The economic numbers this week have pressured stocks. China’s GDP fell for the third straight quarter (9.1%) and our PPI spiked .8%. Fortunately, the CPI this morning was more benign and it came in at .3%. It takes time for higher prices to filter down to the consumer level. As long as inflation is a concern, China will keep tightening. If the US sees inflationary pressures, it could handcuff the Fed. The Beige Book will be released this afternoon and I am expecting “soft” results region by region. This should not be a major obstacle.

Tomorrow, initial claims, the Philly Fed and LEI will be released. The news should be slightly negative.

Credit concerns in Europe will flare up in the next week. Greece is still waiting for confirmation from the troika. Laborers are staging a countrywide strike and that always elevates fear. Officials will be voting on the next round of austerity. If they don’t pass it, the next tranche of funding could be held back. We are likely to see a close vote and Greece will get the next bailout payment. This saga will continue month after month and it will pressure stocks.

Next week, we might get the details for the “grand bargain”. The German Finance Minister already dampened expectations. This was the primary cause for the selloff Monday. Europe has dragged its feet to this point and they won’t devise a comprehensive plan until the situation is dire. There are too many conflicting opinions and the market is set up for disappointment next week.

Overnight, Spain’s debt rating was lowered by Moody’s. Earlier in the week, they placed France on alert. Interest rates in Italy and Spain have been creeping higher and that is a warning sign. If the “grand bargain” calls for Greek haircuts of 50% (largely expected), it will impact credit default swaps.

Earnings have been decent and stocks want to move higher. Asset Managers are buying passively. They don’t want to chase stocks at the upper end of the trading range, but they will buy on pullbacks. Many still expect a year-end rally.

If by some miracle Europe comes up with a decent game plan and EU members endorse it, the market could stage a big rally. The financing will not be an immediate concern since global market would be initially supportive. I see this scenario as highly unlikely.

Stocks should have a positive bias the next two days, but the price action will start to deteriorate as heavy resistance at SPY 125 is tested. Earnings will be decent, but guidance will be cautious. Economic conditions will start to slip and fear will weigh on stocks.

I will let the last few bullish days pass me by. I want to see how the market reacts to heavy overhead resistance. If my forecast is correct, we will see a pullback in the next week or two. This is traditionally one of the strongest trading periods of the year and it is difficult to fade. I plan on keeping my bets very small until I have concrete evidence that a major move is likely. 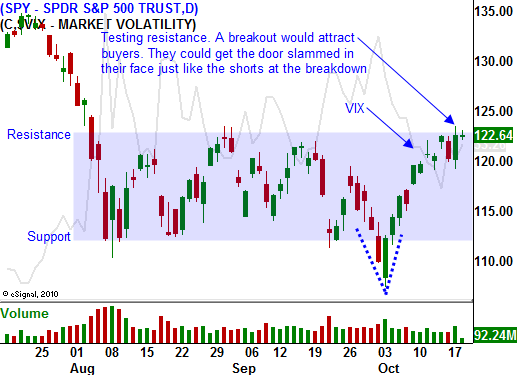