Selling Should Be Contained Until the Grand Bargain Details Are Released. Get Ready For Disappointme

The 10% rally from a week ago is stalling out. This week we’ve had volatile moves each day as the market bumps up against overhead resistance at SPY 123. In the last three weeks, the market has gone from oversold to overbought.

On the positive side of the ledger, stock valuations are attractive. The S&P 500 is trading at a forward P/E of 13 and interest rates are at historic lows. In September, Asset Managers rotated out of bonds and into equities before the end of the quarter (window dressing). This reallocation should continue, but the bid is rather passive.

Earnings have been good. The first two weeks of the season are front-loaded with the strongest companies and good performance was expected. Intel set the tone for the tech sector with solid numbers.

Normally, Asset Managers are worried that they will miss a year-end rally. They aggressively buy stocks in October. I am not seeing that type of price action and I sense no one is worried about missing the next run-up. Asset Managers will buy dips, but they will not chase stocks in the midst of all this uncertainty.

The third-year of a presidential term is also bullish historically. The incumbent reaches across the aisle and “things get done”. That instills confidence and the market rallies. President Obama has polarized Washington and I don’t see that impetus this year.

The “Super Committee” has to trim $1.5 trillion from our budget deficit by November 23rd. This week the New York Times and the Washington Post wrote that no progress is being made. That is “raising alarms” on Capitol Hill. As the deadline draws closer it will weigh on the market.

All eyes are on Europe and it is weighing heavily on the market. European officials will meet this weekend to finalize a “grand bargain”. A Wall Street Journal article discussed how Eurozone lawyers blocked a key concept. Apparently, the EFSF will not be able to act as an insurer for the first 20% of sovereign debt losses. This is a major component of the plan since it provides 5:1 leverage.

France and Germany have been at odds during the last year and a half and this negotiation will not go smoothly. Even if they both agree, a smaller EU member can throw a wrench into the process at any time. Monday, Germany’s Finance Minister warned that expectations for a comprehensive plan are too lofty.

European officials have dragged their feet and they don’t comprehend the gravity of the situation. When the details are released next week, I believe the market will be disappointed. If the “grand bargain” includes a provision for 50% haircuts on Greek debt (largely expected), it will impact credit default swaps. This will pressure large banks.

A nationwide strike in Greece is taking place ahead of an austerity vote. Nothing raises fear faster than riots on CNBC. Reuters reported that the IMF is questioning the EU’s debt sustainability projections for Greece. It wants to hold off the next tranche of money until it gets more information. If the payment is not made, Greece will immediately default.

On the economic front, conditions are stable. This week Cummins, Inc. stated that Europe is already in a recession. China reported its third straight quarterly decline in GDP (9.1%) and a couple of steel mills said they might be postponing ore purchases. Inflation in China is still running hot and they will keep both feet on the brake. Inflation picked up in the US this week and the PPI spiked to .8%. If prices continue to rise, the Fed will be handcuffed.

From a seasonality standpoint, this is one of the most bullish periods of the year. I’m not feeling the bid and I sense we are set up for a decline next week. Asset Managers will wait for the decision in Europe before they get their wallets out.
Economic conditions are fragile as we saw in the Beige Book yesterday. As earnings season unwinds, guidance will be cautious.

The market has been able to tread water the last few days. Earnings have been good, there have only been a few economic releases and traders are fearful that Europe could “pull a rabbit out of their hat”. By the way, if this happens and the market breakout above SPY 123, we are off to the races. This is very unlikely, but possible.

Once the news is out next week, I believe we will pullback to the SPY 115 level. Europe has proven that they can’t agree on anything.

The price action feels tenuous this morning. The overnight news is “heavy” and if selling takes hold, the downward momentum will build. I don’t feel we will see massive selling until the news from Europe is released. Exit long positions and stay on the sidelines unless we get a breakdown today. Even then, keep your size small. This is a dangerous environment.
.
. 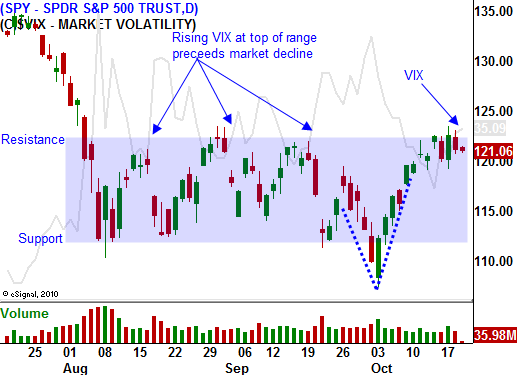