Stocks are testing the downside today ahead of Europe’s “grand bargain”. On the eve of the announcement traders expected some clarity. We still don’t know if they have reached any agreements.

This morning, a meeting between the finance ministers was canceled. Stocks retreated on the news. What could possibly be more important than a meeting ahead of the announcement tomorrow?

Europe has dragged its feet the last 18 months and we should not expect any details tomorrow. Germany and France are still at odds over the nature of the EFSF. Supposedly, France is leaning towards Germany’s concept where it would function as an insurer for the first 20% of sovereign debt losses. We also don’t know how large the Greek “haircuts” will be. Anything more than 40% could trigger credit default swaps. Rumor has it that banks will receive €100 billion in aid. That is less than half of what most analysts feel is needed.

It took months for the EFSF expansion to pass and that was a no-brainer. One small country can throw a wrench into the entire process since a unanimous EU vote is required. After countless meetings with the troika, Greece still doesn’t know if it will receive its next bailout payment. The EFSF has an enormous amount of responsibility and it only has 12 staff members. It should have been ramped up long ago.

Italy’s cabinet meeting broke up last night without any economic reforms. This was something the EU demanded during a meeting last weekend. Politicians failed to raise the pension age to 67 and the opposition is strong. Italy is faced with the same problems as Greece. Interest rates in Italy are near the highs of the year and this is a warning sign.

Even if the “grand bargain” has substance, money still has to be raised. EU members like Finland don’t want to contribute. They were already looking for collateralized loans from Greece. France will most certainly lose its AAA debt rating if it funds the bailouts.

Any way you slice it, this announcement will do little to satisfy investors. The EU is one giant cluster @#$% and they can’t get anything done. Officials are trying to apply pressure to “Club Med”, but those leaders can’t pass the tough measures that are required.

To a smaller degree, we have the same type of gridlock. The Super Committee has not made any progress according to the Washington Post and New York Times. Politicians are concerned after the debt ceiling debacle and the deadline is approaching quickly.

Like most Americans, I am so sick of hearing President Obama complain about the House and the Senate. His job is to help them find middle ground. That’s what a good leader does and he is not capable. Be it Republican or Democrat, our President needs to be a good negotiator.

The economic news this week has been decent. China’s PMI was a little better than expected and Europe’s was worse than expected. This morning, consumer sentiment dropped dramatically. We will get our first look at Q3 GDP in two days and I believe the expectations (2.3%) are too high.

As I mentioned yesterday, earnings reactions tend to soften after the first two weeks. This morning, 3M announced and the stock is down 7%. Overall, earnings have been decent and guidance has been good.

The SPY broke out above resistance at 125 yesterday. That sparked short covering and stocks closed near the high of the day. This morning, the market has fallen below that level. After a 13% rally in a few weeks, we should expect profit-taking.

In August, we were waiting for the FOMC statement. Everyone expected easing and shorts did not want to take a position ahead of the announcement. We all knew that QE2 did not work and that this was a “sell the news” set-up. As soon as the news was released, stocks tanked. I am getting the same vibe ahead of tomorrow’s announcement. I think everyone knows that Europe will not have a comprehensive plan, but investors are still hopeful. Shorts don’t want to get caught if they do pull a “rabbit out of their hat” and they will wait.

I am taking a small short position today knowing that I could get scorched. I have little faith in Europe’s ability to find common ground and I feel that concepts will be etched out. There will not be any concrete decisions.

This is a seasonally strong period for the market and I know Asset Mangers want to believe in Europe. Portfolio performance has been dismal this year and their last hope is for a year-end rally. If we were not at the top of the range, I would not have the “stones” to short this market.

If you do buy puts, keep the position small. The better play would be to wait for the market’s reaction. If we break below support at SPY 123 after the announcement, buy puts. 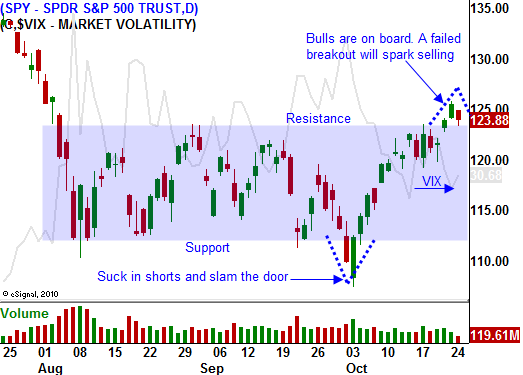