There is a lot of news to sort through today. Earnings season is in full bloom and we will know exactly where we stand by the end of the week. Key economic releases and a bailout decision in Europe will impact trading.

Let me start with the most basic concept. As long as the market believes that Europe is addressing credit concerns, the market will grind higher. Stocks are undervalued and Asset Managers do not want to miss a year-end rally. Global economic activity has pulled back from higher levels, but it is stable and it should not weigh heavily on the market.

Over the weekend, Germany and France seem to have found middle ground. The biggest point of contention on the “grand bargain” is the EFSF. It now appears that France is leaning towards Germany’s concept where it would act as an insurer for the first 20% of losses. Banks would receive €100 billion in capitalization and that is less than half of what most analysts feel is adequate. Greek haircuts would be 40% and that is 10% less than what Germany would like to see and 20% less than what the IMF would like to see. Many details still need to be hammered out and we won’t have all of the answers this on Wednesday.

As long as the market feels like there is progress, stocks will rally. The big issues are finally being addressed and investors doubted this day would come. European officials have been dragging their feet through this entire ordeal.

In the short run, it doesn’t matter that this “grand bargain” won’t solve the problem. The market simply needs to believe that Europe is committed and it will do everything in its power to avoid a credit crisis. If this sentiment gains traction, we will have a year-end rally.

Structural debt issues are not being addressed and simply throwing money at the problem won’t solve it. We don’t know who will finance the debt and Treasury Secretary Geithner is already stated that Europe has enough money to internally finance its crisis. The US is the largest voter (contributor) to the IMF and this means that the EU should not expect a high level of participation. China has already stated that they will not buy debt until they see fiscal reform. Again, the financing won’t be a concern for the next two weeks. EU members will have to vote on the plan and that won’t be a concern for the next two weeks either.

Interest rates in Italy are jumping higher and they are right at the highs of the year. This is a warning sign. Imagine what would happen if Italy needed a bailout.

Look at how difficult it has been for Greece to secure financing. Each week we hold our breath wondering if they will get the next tranche. Even if they get this payment, they will be right back at the trough in a few more months. A 40% haircut in Greek bonds or more is expected and Greek banks are getting hammered today. A haircut of this magnitude will impact credit default swaps and that could have a ripple effect.

If the “grand bargain” is passed, we can expect France’s debt rating to be downgraded.

Speaking of downgrades, the Super Committee has not made any progress according to the New York Times and Washington Post. If we don’t have a plan by the November 23rd deadline, Fitch or Moody’s could downgrade US debt. Last week the Senate shot down a revised jobs plan that would only cost $35 billion. Both parties are polarized and they can’t find middle ground.

Flash PMI’s were released this weekend. Europe was weaker and China was stronger. China’s flash PMI came in at 51.1 versus 49.9 a month ago. That was slightly better than expected. Analysts are also predicting a decline in China’s inflation and that could end tightening.

This week we will get our first look at Q3 GDP. Analysts are expecting 2.3% which is much better than Q2 GDP (1.3%). Economic conditions are fragile and growth is negligible. I believe any number above 2% will be “market friendly”.

Earnings have been decent and cyclicals/financials are catching a bid. The last 8 quarters, stocks have rallied ahead of earnings and into the first 2-3 weeks. Great results get priced in and the market retreats towards the end of the cycle. That timeline coincides with some “heavy” news releases.

In November, the pressure will be on Europe to finalize the details of the “grand bargain”. We are likely to hear opposition within the EU and the process will drag on. A decision by the Super Committee will also be pending and “no news will be bad news”. Traders will error to the side of caution expecting gridlock. The possibility of a US downgrade will also loom. Earnings season will wind down. Guidance will be cautious and retailers will post flat numbers.

We have broken through resistance at SPY 125. That will be a critical support level in the next two months. If it holds, I will sell put credit spreads. If it fails, I will buy puts. I don’t believe that politicians in the US or the EU will find long term solutions and I can’t fully embrace this rally. At my bullish best, I will only be able to sell put spreads. On the flip side, I can see disappointment ahead and I have enough confidence at the upper end of the trading range to buy puts.

We could see two more days of bullish action. Shorts will cover and investors will pile back in. Optimism is high in Europe and that will last through the statement Wednesday. I am not taking any positions now. If the SPY gets to 127 in the next day or two and it closes below 125 after the release, I will get short. If the market tests 125 and support holds, I will sell puts in energy, tech and select cyclicals.

Keep your powder dry for a couple of days. The risk at this juncture is high and the reward is small. Hope is impossible to gauge. We will wait for clarity and then we will take a stand. 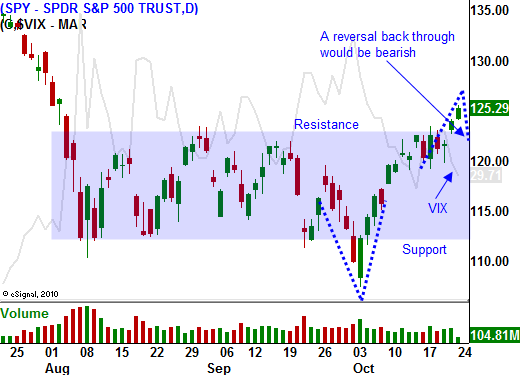