About Face – The Market Liked The News. Asset Managers Will Agressively Bid For Stocks

I have many loyal readers and traffic motivates me to blog. As you can see, my blog is free of advertisements and I would like to keep it that way. Please help me generate more traffic by submitting your feedback to Investimonials. They have added my blog to their list and you can add your comments if you CLICK HERE. Many of you posted comments yesterday – thank you! I can’t tell you how much this means to me.

This week, the market reached a tipping point. The details of Europe’s “grand bargain” were leaked out in advance, but we did not know how investors would react to the news. Stocks are jumping higher overnight and we know that bulls have the upper hand.

The EU will force a 50% haircut in Greek debt, it requires banks to raise €106 billion by June and it will raise €1 trillion to insure sovereign debt issues on a leveraged 4:1 basis. This outcome was largely expected.

The bad news is that I was on the wrong side of this bet. The good news is that I kept my size small and I advised you to do the same. Risk levels were extremely high and the market was going to break one way or the other. Now that the reaction is known we will take a small loss and adjust our trading.

The “grand bargain” does not change the underlying problems in Europe, it simply buys time. Structural issues exist and European leaders can’t make the required changes. Italy was supposed to raise its retirement age to 67 this week and cabinet members physically attacked each other during the meeting. It has backed down from proposed austerity measures and it is not sticking to its promises. Greece is in a similar situation, but it is 1/5 the size of Italy.

Banks in Europe have been downgraded and only 7 out of 28 banks would pass if new global capital requirements were enforced. The cost of capital is high and they will sell assets to raise the required €106 billion.

We still don’t know what impact the 50% haircuts will have on credit default swaps.

With the market near the high end of its range, this could have easily been a “sell the news” event. The European credit crisis has kept a lid on this market and the “grand bargain” as reduced fear.

Now that the reaction is known, we can justify why stocks are moving higher. First of all, Europe has dragged its feet for 18 months and this is the first real commitment we’ve seen. It appears that officials grasp the magnitude of the situation and they are prepared to do whatever it takes.

Earnings have been decent and stocks are trading at a very low forward P/E of 13. Asset Managers have posted dismal results this year and they are pinning their hopes on a year-end rally. Those who missed the low three weeks ago will be scrambling to catch up. That will strengthen the bid for the next two months. Interest rates are low and the Fed will maintain its “loose” policy.

In the last week of September, we saw Asset Managers rotate out of fixed income and into equities. That reallocation should continue. Economic conditions have declined in the last two months, but activity has stabilized.

This week, China’s flash PMI increased to 51.1 from 49.9 a month ago. They are the cornerstone to global economic activity. Finance Minister Wen made remarks Wednesday and stated that bank reserve requirements could be lowered soon and interest rates could be reduced in 2012. That is a very encouraging development. Chinese officials have also stated that they will invest in Europe.

This morning, Q3 GDP came in as expected at 2.5%. The news was “market friendly” and this is our first look at the quarter. Initial claims came in at 402,000 and it has flatlined the last month. Unemployment is high, but this level is stable.

Let me temper my optimism by saying that the problems in Europe will continue to fester. EU members still have to endorse the plan and there has been plenty of dissension. France is likely to lose its credit rating in the future. Austerity promises in “Club Med” will be broken and the EU will struggle to enforce agreements.

In the US, the Super Committee has not made any progress. The November 23rd deadline is approaching and gridlock would result in a US downgrade by Moody’s or Fitch.

Stock valuations are cheap and earnings have been good. Interest rates are low and Portfolio Managers are searching for returns. There is plenty of money on the sidelines to fuel a rally. The market will grind higher the rest of the year, but you should expect speed bumps along the way.

Here is my plan of action. First of all, I will sell my puts near the open. I want to watch the price action during the first half-hour. This is a monstrous move and we are likely to see panic buying on the open as shorts run for cover. The price action will settle down and the market should inch higher throughout the day. Financial stocks will love the news and I will buy a few calls on strong banks. I will also buy calls in stocks that have released great earnings, are in an uptrend and that pulled back on the announcement. There are some signs of weakness in the cyclical space (MMM, CMI), but these stocks are on support and they are prime for selling put credit spreads.

The buying will be steady for a few days as Asset Managers play catch up. Try to get on board early, but don’t take positions right on the open. The prices will be all over the board and your fills will be horrible. 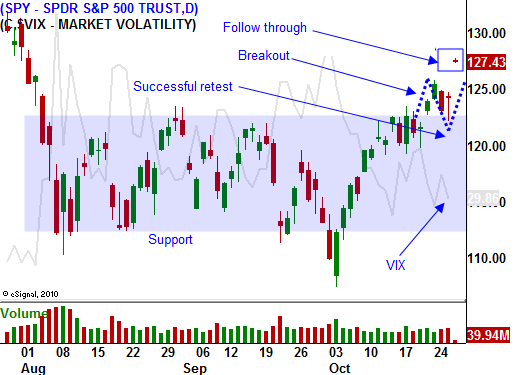