Time To Buy Calls – We Should See A Strong Bid To the Market For At Least A Week!

The last few days I have been asking you to post comments about this blog on Investimonials. Thousands of readers and only 8 comments? Please take a few minutes to share your thoughts. Traffic motivates me an so does your feedback. I put about 3 hours into my daily research and I share it with you. As you can see, my blog is free of advertisements and I would like to keep it that way. You can add your comments on Investimonials if you CLICK HERE. For those of you that posted comments – thank you! I can’t tell you how much this means to me.

The tighter the range, the bigger the breakout. One way or the other we were set up for a big move this week. Traders knew what to expect from Europe, but they did not know how the market would react. Now we know the answer.

Wall Street didn’t need a solution, it just needed assurance. European officials are committed and they will take measures to avoid a financial collapse. To this point, they have been dragging their feet and there has been an enormous amount of dissension within the EU. The problems are not fixed and they will continue to fester. For now, it’s time to party.

Stock valuations are cheap and they are trading at a forward P/E of 13. Interest rates are at historic lows and decent returns are hard to generate. Portfolio managers are desperate and they will plow money into the market. The first move from the 52-week low a few weeks ago came very quickly and most Asset Managers were not able to get on board. They waited for the EU reaction and now they are playing catch-up. The bid to the market will be strong for at least a week.

Economic activity pulled back in the last two months, but conditions have stabilized. This should not be an issue for the remainder of the year. China’s PMI came in better than expected, GDP was in line at 2.5% and initial claims have been stable at the 400,000 level the last few weeks.

China’s Finance Minister said that bank reserve requirements could be lowered in the near future. He also hinted that interest rates will not be raised and they might even come down in 2012. This is a key development since China is the cornerstone to global economic growth.

The dark credit crisis cloud that has been keeping a lid on this market has been lifted. This backdrop is very similar to the one we saw in September 2010. Greece was in trouble and the EU didn’t know if it should get involved in a bailout. The market declined and in August the EFSF was formed. From September through March, the S&P 500 rallied 35%. I believe this move will be smaller in magnitude, but we should have smooth sailing for at least a few weeks.

Conditions have changed dramatically in the last year. Ireland and Portugal needed bailout money and Spain and Italy are on the ropes. Interest rates in Italy are above 6% and that is rather surprising given the EU decision yesterday. This is worth keeping an eye on, but for the time being I believe it is because the details are still sketchy and EU nations will be voicing their concerns over the next few weeks.

If the EU did not take decisive action, we would be on the brink of a financial disaster in a matter of months. The whole European structure is so complicated that they have to remain proactive. It takes months for them to pass legislation and they can’t wait for a crisis.

There will be a few speed bumps along the way this year. France’s debt will get downgraded, but that is expected. The Super Committee has not made any progress and gridlock would weigh on stocks. The economic numbers will be decent and they won’t stand in the way of the rally.

This is a time to get aggressive and buy calls. I like cyclicals, basic materials and tech. Look for stocks that have been beaten down and are rebounding off of support. Once they have broken out above resistance, they will run. Asset Managers that missed the boat will be scooping up “unloved stocks”. Make sure the earnings were good.

As this rally approaches SPY 135, I will shift to put credit spreads. I want to give myself breathing room at the high end of the range. 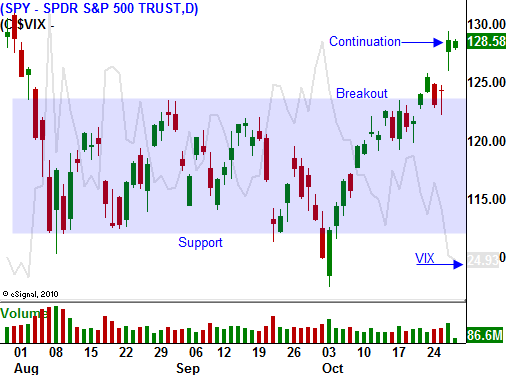