Normal Round of Profit Taking. Look For Overnight Support On Decent Economic Numbers

First of all, THANK YOU for all of the great comments you have been posting to Investimonials. Each review is so meaningful and it reinforces the work that I put into this blog. I’m proud and pleased that my research has helped you make money.

Last week, the market shot higher after the EU announced its “grand bargain”. Most of the details had already been leaked out and the outcome was expected. The European credit crisis has kept a lid on the market and now that fear has subsided, stocks broke out above overhead resistance.

Asset Managers have tiny gains to show for the year. Investment returns have been miniscule and everyone will be scrambling to board the rally train. They do not want to miss a year-end rally and the bid to the market will be strong for at least a few more weeks.

Stock valuations are cheap at a forward P/E of 13. Interest rates are low and now that fear has subsided, money will rotate into equities. Earnings have been decent and balance sheets are strong. Guidance has been cautious, but not dismal.

Two months ago, the market was preparing itself for a double whammy. Credit concerns in Europe were escalating and the economy looked like it was ready to fall off a cliff.

The economic scene has stabilized and China reported a stronger-than-expected flash PMI last week. It will officially post its PMI tonight and I am expecting a decent reaction. Inflation is expected to drop and last week the Finance Minister hinted that tightening has ended. China might even lower interest rates in 2012. Any “dovish” talk would be very “market friendly”.

Economic conditions in the US have also improved. Last week, Q3 GDP came in at 2.5%. That was much better than the 1.3% reported in the second quarter. Initial claims have been flat at 400,000 and this week’s employment statistics (ADP, Challenger, Gray & Christmas and the Unemployment Report) should be in line. I don’t believe we will see job growth, but by the same token I don’t believe the releases will have a negative impact on the market.

ISM manufacturing will be released tomorrow and I am expecting it to tick higher. ISM services will be released Thursday and it should inch higher as well. Today, Chicago PMI came in a little light, but it was close to expectations.

The market is starting to price in QE3. Many traders believe that the next round of easing will focus on mortgage-backed securities. The FOMC will release a statement Wednesday, but I don’t believe QE3 is in the cards. Economic conditions are stable and the Fed will hold off. They might hint that this “silver bullet” exists. Overall, the comments should be “dovish”. During the statement a month ago, they increased the possibility of an economic decline and I believe that rhetoric will soften.

After a huge rally in three weeks, we should expect a pullback like this. Stocks have had a great run and profit-taking has set in today. As long as the breakout at SPY 125 holds, I would view every dip as a buying opportunity. The breakout is still very “fresh” and the longer it holds, the more significant the support level. I would wait to see if buyers step in after the economic releases tonight and tomorrow morning. If they do, add to call positions.

My biggest concern is that the EU hits some snags in the next week or two. Interest rates in Italy are moving higher and that is not the reaction anyone expected. It is a potential warning sign and we need to tread carefully.

The Super Committee will also be releasing a statement this week. A negative tone would weigh on the market.

The market backdrop will always be tenuous. Huge sovereign debt levels and structural problems will continually weigh on the market. There will be times like this when the fear level temporarily subsides. The market was not looking for a solution, just wanted to see a level of commitment from EU officials.

Asset Managers are under allocated and they will look for opportunities to buy stock. Year-end strength will attract buyers. I expect to see a small rebound into the close today. Wait for support and add to long positions this week. 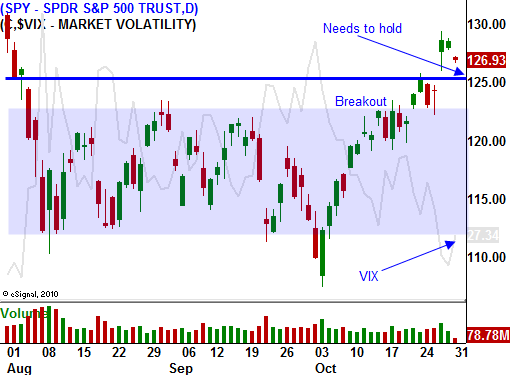