As Europe Goes – So Goes The Market. Stocks Want To Move Higher.

Wading through all the news this week is like trying to drink water from a fire hydrant. The market feels like it wants to move higher, but the rug can get pulled out at any time.

Greece threw us a major curve ball this week. They reached an agreement with the EU last Wednesday and the Prime Minister had a change of heart. He decided to hold a referendum because of all the opposition in his country. From my understanding, Greece will hold a confidence vote Thursday night. The Prime Minister could be ousted. If he remains, Greece will move forward with the referendum vote.

If he loses his position, there will be chaos as they scramble for a new leader. If he wins, there is a good chance that the parliament will not accept the EU’s conditions when they vote in coming weeks. If this transpires, Greece will not get its next bailout payment (they run out of money in two weeks) and it will default. Either way, there will be turmoil.

Interest rates in Italy continue to climb. If the spread between Italian and German bonds rises above 4.5%, margin requirements will be raised. That will create an immediate spike in interest rates and a new problem will emerge. The ECB has aggressively been purchasing Italian debt and it has not been able to contain the rise in interest rates. Italy is the third-largest economy in the EU and it poses a much bigger threat than Greece.

This morning, Europe released its PMI. It fell to 47.1 from 48.5 in September. A reading below 50 indicates economic contraction and many analysts believe Europe is already in a recession.

The EFSF was supposed to auction €5 billion to fund a portion of the Irish bailout. They canceled the auction do to market conditions. The situation in Greece has raised the cost of capital and they will hold off for a few weeks.

It only took five days for the “grand bargain” to run into trouble. The EFSF raised €800 billion last year and after it pays out all of its commitments, there is only about €230 billion left to insure sovereign debt purchases. No new money has been raised. Treasury Secretary Geithner and China’s Finance Minister Wen have both stated that Europe has enough money to handle its own problem. The plan looks great on paper, but the true test will come when they ask EU members to contribute.

This afternoon, the FOMC will release its statement. A small percentage of traders are expecting the Fed to launch QE3 and it would involve the purchase of mortgage-backed securities. Economic conditions have improved since the last meeting and I am not expecting any action. The language should be more encouraging. During the last meeting, the Fed said that economic risks are elevated. If the rhetoric is more upbeat, the market will rally on the news.

ADP employment was released this morning and 110,000 jobs were created in the private sector during the month of October. That was slightly better than expected. Initial claims have been hovering around 400,000 and employment conditions are stable. I don’t believe Friday’s Unemployment Report will stand in the way of this rally.

Major news events stand before us and they will impact trading the rest of the week. Earnings have been good and economic releases in the US and China have been stable. We are in a seasonally bullish period and stocks want to move higher.

Any shred of good news from Europe will propel stocks. Unfortunately, there are many cracks in the dam and it could break at any time.

I entered long positions last week and I was shaken out Monday. I hate getting whipsawed and I am keeping my powder dry. These issues need to be resolved before I stick my toe back in the water.

Option implied volatilities have spiked and I do like selling out of the money put credit spreads on strong stocks. The market is likely to move higher and this strategy will give you breathing room should conditions deteriorate. Focus on stocks that weathered the storm this week and that have strong support levels. The Fed comments should be “market friendly” and the price action looks positive today. Keep your size small.
.
. 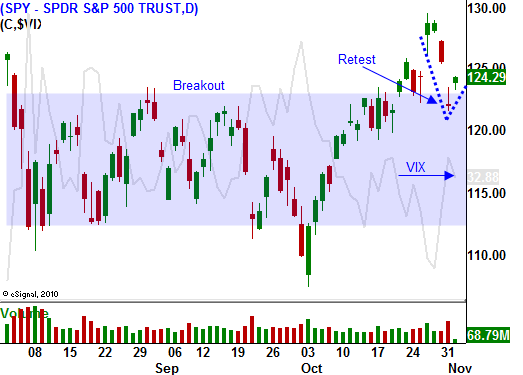