This week, the tug-of-war between bulls and bears reached a new level. The pressure on each side is building and market volatility will increase.

Asset Managers have small gains to show for the year and they don’t want to miss a year-end rally. Stocks are trading at a forward P/E of 13 and they are cheap. Balance sheets are strong and companies are buying back shares. Interest rates are near historic lows and that makes bonds a poor investment alternative.

During yesterday’s FOMC statement, the Fed said that it plans to keep interest rates low for at least 8 months. They still see substantial economic risks, but the rhetoric was toned down from the last meeting.

Global economic growth has pulled back in recent months and it is marginal. Activity has not “fallen off a cliff” as many had feared. The releases have been decent (GDP, ISM manufacturing, ADP and initial claims) and conditions are stable. Tomorrow’s Unemployment Report will be in line. It won’t spark buying, but it won’t stand in the way of a rally either. Traders have become numb to 9% unemployment.

China’s PMI came in a little soft this week. That negative news was offset by a decrease in inflation. Finance Minister Wen said that they will not be tightening and he hinted that interest rates might be cut early next year. This would stimulate economic growth in China.

From a seasonal standpoint, stocks have a tendency to rally into year-end. This pattern is even more pronounced during the third year of a presidential term. The bid is so strong that the market has been able to shrug off alarming news in Europe.

Stocks can weather recessions, terrorism and war, but they can’t handle a credit crisis. When monetary systems lock up, commerce shuts down. The financial crisis has shifted from banks to sovereign debt. Global economic powerhouses (EU, Japan and the US) are straddled with massive deficits and the chain is only as strong as the weakest link.

The EU has been dragging its feet the last 18 months. With 17 member nations, macro decision-making is very arduous and progress is slow. As we learned during the 2008 financial crisis, conditions can deteriorate in a matter of days. The EU could theoretically meltdown before they even schedule a meeting. Consequently, leaders must be proactive.

Last week, the EFSF was granted “new powers” and a “grand bargain” was proposed. Greece has been the thorn in everyone’s side and it agreed to strict new policies. If it abided the rules it would receive €120 billion in aid. The Prime Minister consented to the terms and stocks rallied. Under the agreement, creditors would write down Greek debt by 50%. Massive cuts and restructuring were required under the agreement and the Prime Minister had a change of heart this week. He decided to put the proposal up for public vote since 60% of the citizens were opposed. The market was shocked by his action and global markets retreated.

Now Greece will hold a confidence vote. Rumor has it that the Prime Minister will be ousted tomorrow. If this happens, a new leader will be elected and that could take weeks. The new Prime Minister could accept the EU’s bailout terms or decide to hold the referendum. If a referendum is held, Parliament stated that it would happen on December 3rd or earlier. Unfortunately, Greece will run out of money before then. The developments this week cast more doubt on the stability of the EU than ever before.

European banks were already bracing themselves for a 50% haircut. This week Man Financial (200-year-old firm) went bankrupt due to its exposure. This morning, Egan-Jones Ratings Co downgraded Jefferies & Co. (US trading firm) due to sovereign risk exposure. European banks are grossly undercapitalized and a complete default (100% haircut) could topple other banks. The EU wants financial institutions to raise €120 billion in the next six months. They will sell assets instead of issuing debt because the cost of capital has escalated. These sales will be at depressed prices and this should have been done months ago.

Interest rates in Italy are spiking. If spread between German 10 year bonds and Italian ten-year bonds rises above 4.5%, margin requirements for Italian debt will increase. That will cause rates to jump even higher. The ECB has actively been purchasing Italian bonds and it can’t keep a lid on yields. Prime Minister Berlusconi could not push through fiscal reform as required by the EU and rumor has it he might fail a confidence vote. Default risk has been getting priced in and rates have almost reached the point of no return.

The EFSF “grand bargain” will supposedly spark demand for sovereign debt since the first 20% loss will be covered by the EU. Since the decision last week, Italian rates have continued to climb. This was unexpected. Of the €800 billion that was raised by the EU last year, there is only €230 left for this program. The EU has not made any provisions to raise more money and they should aggressively be doing that now. Once again, they are dragging their feet. They know the opposition within the EU would be high if they asked for more money so they are urging the US and China to contribute.

In the last two weeks, Treasury Secretary Geithner and Chinese Finance Minister Wen have both stated that the EU has enough money to solve its problem internally. In other words, don’t count on us.

This morning the ECB lowered interest rates and that has put a bid under the market. Yesterday’s FOMC statements were “dovish” and that has also helped stocks. The earnings and economic news has been “market friendly” and Asset Managers are buying today.

As I mentioned at the beginning of today’s comments, the tug-o-war rages on and both sides are pulling harder than ever. For now, the bulls appear to be winning but they will let go at the first sign of trouble.

The market hates uncertainty and the news from Greece and Italy is very concerning. I am largely in cash, but I am ready to short financials if the SPY is below 125. This sector has been lagging the rest of the market and it has bounced from deeply oversold conditions. The fundamentals are still weak and I feel the remaining upside is limited. If a financial crisis breaks out, this sector will get nailed. If the market rallies, I believe financials will barely participate. I also like gold during this period of uncertainty.

A round of late day selling would be bearish. Stocks feel like they want to move higher, but they are sluggish. If bulls can’t get something going, profit taking will set in near the close. Bears are nervous ahead of the Unemployment Report, but they could get more aggressive after the number. Holding long positions over the weekend seems like a risky proposition.

I don’t mind missing a rally, but I would kick myself if I got long and had the rug pulled out from under me with all of this uncertainty. Respect the warnings signs and use SPY 125 as your guide. 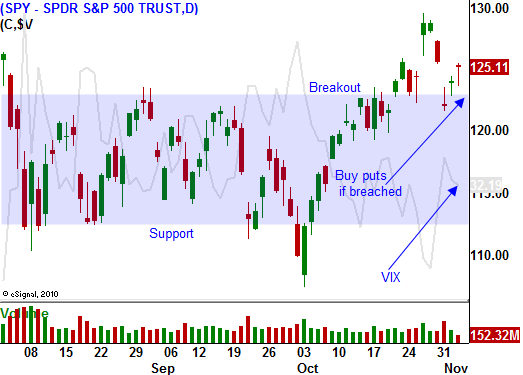