Interest Rates In Italy Are A Real Concern. Bulls Won’t Have It Any Better – Now or Never

Last week I asked readers to evaluate my blog on Investimonials. I received 35 responses and I would love to get to 50. If I hit that number over the weekend, I will post an option trade in my blog with entry and eixt instructions next week. You can add your comments on Investimonials if you CLICK HERE. For those of you that posted comments – thank you! I can’t tell you how much this means to me.

As I mentioned yesterday, the tug-of-war rages on and both sides are pulling harder than ever. Attractive stock valuations are doing battle with European credit concerns. On a short-term basis, bulls will never have a better opportunity.

Earnings have been excellent, guidance is decent, the Fed is accommodative, economic conditions are stable, the third-year of presidential term is historically bullish and Asset Managers are rotating out of bonds and into equities. In a matter of a few weeks, the landscape will change.

The Super Committee has not reported any progress. By mandate, they must trim the deficit by $1.5 trillion. Gridlock is very possible and it would weigh on the market.

As we enter 2012, economic conditions in Europe will deteriorate. The PMI posted this week came in much lower than expected. A decline in economic activity will result in lower tax revenues and wider deficits. The EU/ECB/IMF put Italy on alert today. Their budgets will be scrutinized. When they fail to hit targets, bailout money will be withheld.

This week, Italy’s Prime Minister tried to pass austerity measures and he was unable to. Last week, he attempted to raise the retirement age to 67 in accordance with EU agreements he made. A fight broke out in his cabinet and members physically attacked each other. No progress was made. Italy also agreed to austerity measures a number of weeks ago and it subsequently backed out from certain provisions. The Prime Minister of Italy could face a confidence vote in the next week or two. The focus this week has been on Greece, but Italy should be the real concern.

Even after the “grand bargain” was announced last week, yields in Italy continued to climb. The exact opposite was expected. A master bailout plan in Europe should have tamed interest rates since the EFSF was going to guarantee losses for the first 20%. The ECB has been buying Italian bonds to no avail and interest rates continue to climb.

In today’s chart can see that yields in Spain and Italy have reached the highs of the year. If Italian yields surpassed German yields by more than 4.5%, margin requirements will be raised. That will spike rates even higher as debt holders sell inventory to meet margin requirements. This is a very slippery slope and once an inflection point is reached is almost impossible to reverse.

Interest rates in France are also on the rise. They are backstopping “Club Med” and their economy is struggling as well. In the next few months, their credit rating could be downgraded. The “grand bargain” was supposed to restore confidence, but traders are seeing right through it.

The EFSF has all of this power yet it only employs 12 people. The EU has not discussed raising one dime of capital. Given its current commitments, it only has €230 billion left in its “slush fund” from last year. Treasury Secretary Geithner and China’s Finance Minister Wen told the EU that they need to internally raise money.

Here’s the bottom line. If bulls can’t muster a rally right now, it won’t happen. Credit conditions will continue to deteriorate and the Super Committee will raise concerns. Earnings will be bumping up against tougher comparisons and the political mudslinging will increase ahead of 2012 elections.

Fading the market into year-end is almost always a losing proposition. The seasonal trend is so strong that it normally overpowers all other forces. That said, I recall the warning signs I saw in 2007. The market declined in the summer and the S&P 500 rallied to a new all-time high in October. Economic conditions were decent, earnings were strong and it looked like we were going to have a fantastic year-end rally. In November and December, the market dropped. This was a major warning sign. When stocks can’t rally into year-end it signals that bearish times are just around the corner.

What happens in Greece this weekend is almost irrelevant. The Prime Minister will probably survive the no-confidence vote and then he will resign. A new Prime Minister will be appointed and he will accept the EU bailout terms. The market might momentarily rejoice, but the focus will quickly shift to Italy.
I also mentioned this week that the economic releases would not weigh on the market or stand in the way of a rally. Today, the Unemployment Report barely moved the needle. Jobs were created, but the number is far from what we need. ISM manufacturing and Services were in line, but showed little improvement from September.
The market has fallen below SPY 125 and I am buying puts on financial stocks. This has been one of the weakest sectors and even if the market rallies, I don’t think these stocks have much more upside. The earnings bounce for this sector has stalled and financials look ready to roll over. If I’m right and the market declines, they will get hammered.

I don’t mind missing a rally, but I would kick myself if I ignored the warning signs and lost money on bullish trades. As a result, I will either be short of flat.

Take a few bearish positions now. If the SPY closes below 123, add. That would mean a major decline today. If this move gains momentum this afternoon, we could get there.

If by chance you are long, lighten up on positions if the SPY closes below 125 today. 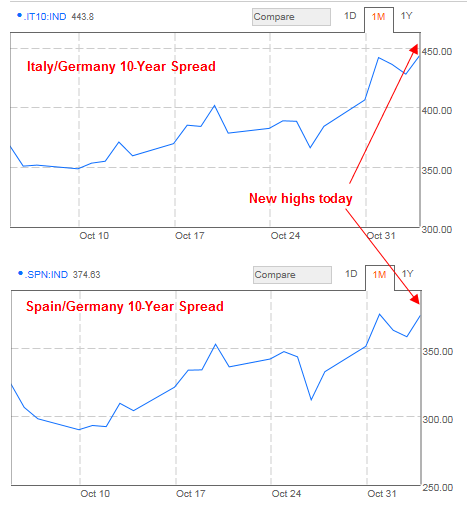