Stocks Will Inch Higher. Resist Temptation and Wait For Clarity. Buy Puts On A Close Below SPY 125

Yesterday, the market tested the downside early and bears could not get anything going. By mid-afternoon stocks rebounded and they finished higher on the day. The SPY is above 125 and as long as that breakout holds, I will be on the sidelines.

Asset Managers are nervous. They are more concerned that they will miss a year-end rally than they are about a credit crisis in Europe. Portfolio returns have been negligible and this is their last chance to put points on the board for 2011. It’s all about relative performance and many Asset Managers are under allocated.

Without question, stocks are cheap, balance sheets are strong, productivity is high and profits are growing. Seasonal strength has kept a bid under this market and stocks want to move higher. The only thing keeping a lid on prices is Europe.

The headlines out of Greece and Italy are concerning, but disaster has temporarily been avoided. The Greek Prime Minister will step down and power will be transferred to a temporary government that will deal directly with the EU. The bailout money is likely to come and there will not be a referendum.

In Italy, the Prime Minister could be subjected to a confidence vote if the budget vote this morning does not pass. This outcome would demonstrate that he has lost the majority and new elections could be held. That austerity vote is likely to take place just after the open.

The market is clearly focused on Europe. If Italy’s Prime Minister fails a confidence vote Italy needs to form a temporary government like Greece did. It must avoid elections. Their interest rates are spiking into dangerous territory and the market hates uncertainty. Elections would take 2 to 3 months and investors will get nervous. Italy has major bond auctions coming up in the next few weeks. The EU has warned them that the ECB will not be buying Italian bonds if they don’t adhere to austerity promises. The ECB purchases have kept Italian yields from skyrocketing.

Not one European bank has attempted to raise capital. Unicredit could be the first and it is preparing for a €7 billion stock sale. The results will be carefully scrutinized since European banks have to raise €120 billion in the next six months.

The earnings news this week is fairly light. It will be highlighted by CSCO and retailers. Retail sales came in light last week and the releases could weigh on the market ahead of the holiday. The economic releases are minor and they should not influence trading.

As I mentioned yesterday, the market is likely to inch higher each day that disaster is avoided. However, one bad news item out of Europe could spark a massive decline. This rally will lure in speculators. The higher we go the more money they will commit. If bad news hits the market they will scramble for the exits. This will create an air pocket and the market will reverse sharply.

The economic news has been mediocre at best. In two weeks the Super Committee must present their plan to trim $1.5 trillion from the budget. Sources in Washington report little progress. Uncertainty is running high and the market has limited upside.

If the SPY closes below 125, I will buy a few puts. If it closes below 123 I will add to the position. Otherwise, I am on the sidelines waiting for clarity.

For those of you that have seen “Bugs Life”, this rally is like the beautiful light coming from the bug zapper. Everything looks so good and the market just keeps bouncing back after bad news. Avoid temptation and stay away from the light.

Even if events restore confidence in the next week, I will be an out of the money put credit spreader at best. That is as bullish as I can get at this level. 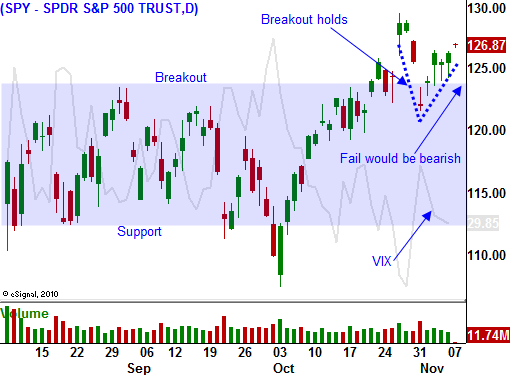