The Damage Is Done. Market Senses Danger and the Risk Level Is Elevated. SPY Below 125 – Stay Short

Yesterday, the market tanked as interest rates in Italy skyrocketed. Margin requirements on Italian debt were raised and that added fuel to the fire. They have reached the point of no return and we should expect them to climb higher in coming months.

Italy has the seventh largest economy in the world and it is “too big to bail and too big to fail”. Prime Minister Berlusconi said he would resign once a new budget has been passed. Unfortunately, they have not finalized the austerity plan so there is nothing to sign. Italians have not decided on a replacement and politicians in North and the South are battling. Berlusconi was in favor of elections, but after yesterday’s bond collapse, he has reconsidered. Elections would take too long and immediate action is required.

Monday will be a very important day for Italy. Rumor has it that they are scrambling to draft and pass a budget over the weekend. The IMF will be visiting Rome to observe austerity progress and a budget would ease concerns slightly. The country is in disarray and capital markets are pricing in the risk default. A major bond auction (€3 billion of five-year bonds) will be auctioned Monday and the demand will be monitored closely by the market. Italy’s largest bank (Unicredit) will report earnings Monday. Poor results could be devastating since they will attempt to raise €8 billion in capital soon.

Overnight, Italian interest rates have eased. Short-term interest rates don’t normally move much and the results from last night’s 12 month bond auction are very telling. Yields jumped to 6.02% from 3.57% a month ago. The ECB was actively supporting that auction. They needed to stop the bleeding from yesterday and who knows how high they would have been without that aid.

Greece was stealing the headlines a week ago and now it has faded into the background. This morning they appointed a new Prime Minister (Papademos). The process was not smooth and there was an incredible amount of squabbling. He will have his work cut out for him. They still need to pass the 2012 budget and approve the EU bailout. Unemployment increased from 16.5% in July to 18.4% in August.

The EU is coming apart at the seams. They needed to stay proactive and all of their programs/agencies are still in a flux. In its monthly bulletin, the ECB cut their growth estimates in 2012 by 50%. It now believes the GDP will only be .8% for the year. This new forecast will dramatically reduce tax revenues and deficits will be large. This morning we learned that Italy’s industrial production fell 4.8% in September and France’s industrial output fell by 1.7%.
In the US, we have our own issues. We can’t balance the budget and the Super Committee deadline is approaching. Multiple news sources are reporting that talks have almost collapsed. Senator Rand Paul said the GOP is refusing to talk after Democrats rejected a revenue raising proposal. If the Super Committee does not meet its November 23rd timeline, Fitch or Moody’s downgrade our credit-rating.

Financial analyst Meredith Whitney has been predicting municipal defaults. This morning, we have our first casualty. Jefferson County (Alabama) filed for the largest muni bankruptcy in US history. It owes $3.1 billion in sewer debt. Tax revenues are down in this stagnant economy and this could be the sign of things to come.

Global markets are recovering from yesterday’s collapse. Italy’s interest rates have pulled back slightly and rumor has it that they will pass the budget and appoint a new Prime Minister over the weekend (tall order). Greece has also appointed a new Prime Minister. The “warm fuzzy” that we are feeling this morning will fade quickly. Nothing has changed. Deficits will continue build and the EU is flat-footed and fragmented.

Since the “grand bargain” announcement two weeks ago, not one dime has been raised for the EFSF or by undercapitalized banks. The US and China don’t want to contribute and they feel the EU has enough money to take care of its own mess. Conditions have deteriorated rapidly and there is no time to waste. The EU moves at a snail’s pace and they need to be proactive. The market smells trouble and the lack of unity/action suggests that a crisis is close at hand.

It is unusual to see a major market decline during one of the most seasonally bullish periods of the year. That alone is a warning sign. Asset Managers are hoping for a year-end rally so that they have something to show for 2011. The bid had been strong during earnings season, but it has weakened dramatically. Portfolio Managers no longer fear that they will miss a big year-end rally. They will wait for support and they will buy at lower levels.

This morning, initial jobless claims came in at 390,000. That was 10,000 better-than-expected and this is the second decent week in a row. In the grand scheme of things, this number is insignificant. Last month we only added 80,000 jobs and we need upwards of 250,000 jobs just to keep pace with first-time job seekers.

Earnings season is tapering off and retailers will dominate the releases. Results have been dismal and that news should weigh on the market.

Yesterday’s freefall was a bit over-extended. This morning we are getting a relief bounce. Not much has changed overnight and traders can see that longer term issues are coming to a head. I believe the rally will lose steam early in the morning and the downside will be tested. If the selling gains momentum and bulls can’t muster a bid, the market will decline late in the day. With all of the looming news over the weekend, Asset Managers will not bid aggressively. They will wait for clarity.

If Italy drafts and passes a budget under a new Prime Minister, we could see a nice bounce next week. Once that move runs its course, the market will be looking for additional progress. There won’t be any and we will start to drift lower.

Look for very choppy price action with a bearish bias over the next few weeks. Greece, Italy and the Super Committee will keep a lid on the market.

As for today, there should be a nice shorting opportunity. Once the early rally stalls, buy puts. Use SPY 125 as a stop. I am long puts at that level and as long as we close below SPY 125, I will hold on to my puts. If the market closes below SPY 123, I will add to the position. 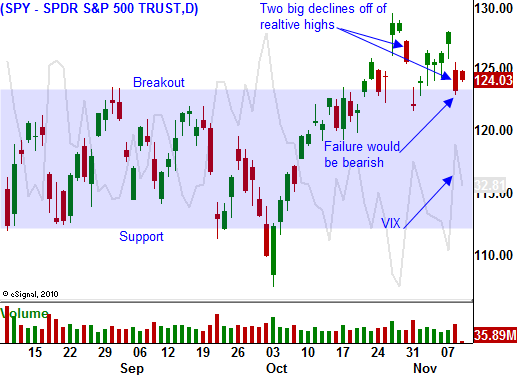