Hope Is Temporarily Restored. Resistance At the 200-Day MA Should Hold

The chart for the SPY the last 3 weeks is filled with huge gaps and reversals. The market is all over the board.

I can feel how desperately Asset Managers want to push the market higher, but every time it gains traction, European credit concerns pull the rug out.

This morning, Greece appointed a new PM. It will pass the EU bailout vote and it will get its money. That is good news, but it does not change a thing. They will not follow through with austerity.

Rumor has it that Italy will draft a budget today and it will vote on it Saturday. There is a chance it won’t pass and they still do not have a PM selected. Italy backed out of austerity promises made this summer and they won’t stick to the plan either. They have a $5B auction next week and with help from the ECB, it should be OK. Italy’s largest bank (Unicredit) will post earnings Monday. It will try to raise $5B in equity and credit markets will be watching closely.

These new PM’s don’t change a thing. The countries are up to their eyeballs in debt and they don’t want to cut spending. Economic conditions are tanking. Lower tax revenues will result in huge deficits next year. Even with austerity, they will be deeper in the red.

The issue is structural. When Italy tried to raise the retirement age to 67 two weeks ago, cabinet members physically attacked each other. This was a tiny hike and the PM agreed with the EU to do it. A new PM won’t matter.

A multitude of news sources report that the Super Committee has not made progress. Their Nov 23rd deadline is 12 days away. They only need to trim $1.5T from our budget over the next 10 years and they can’t even do that. Republicans put revenue increases on the table and Democrats walked out. If they struggle to reach a plan, Moody’s or Fitch will downgrade our debt.

There is a good chance that all will go well in Europe over the weekend and the market is pricing that in. If we hit a snag anywhere, the market will sell off. Even after all of the changes take place, the dust will settle and traders will be looking for the next reassurance. They won’t get one.

Europe is headed down a slippery slope and hope has temporarily been restored. Notice I said hope, not confidence. No one really believes that conditions will improve. At best, the “can” will get kicked down the road.

The EFSF has not raised a dime and banks are afraid to issued debt/equity. The costs will be high. Like the EU, they are sitting on their hands and they won’t act until they are forced to. During the last two years, they should have been beefing up balance sheets and taking write-down’s like US banks did. Now they are behind the 8-ball.

On rare occasion I play craps. Once I am up I put my initial investment in my pocket and I play the “house’s money”. It is a cardinal sin to reach back in my pocket.

Today I am committing a cardinal trading sin. The SPY gapped up through my stop on the open. I am raising my stop to 127.45 – the 200-day MA. This is normally a dangerous move and it could be a sign that I am not willing to admit that I am wrong. In this particular instance, I believe I set my initial stop too low.

The market has reversed sharply from the 200-Day MA twice in the last two weeks and it has been very vulnerable to news. I feel that there are many land mines that have to be navigated and I need to give the trade more room. The warning signs are there and I have to weather a few relief rallies.

If we get another sell-off from this level, resistance will build. Bulls will get discouraged and the next decline could be meaningful.

This is a holiday-like environment and the bond market is closed. That usually favors the bulls. I am sticking with my short positions as long as we close below the 200-day MA. 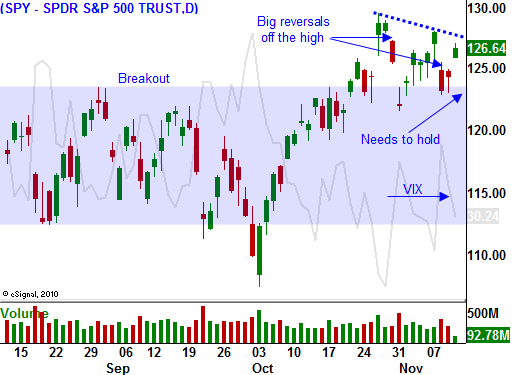