Euro Interest Rates Are Climbing and the Super Committee Is In Gridlock. Stay Short

Last week, stocks rallied on the notion that new leaders in Italy and Greece would ease credit concerns. Both Prime Ministers promised to step down after specific actions were taken. Stocks moved higher but they weren’t able to punch through overhead resistance at SPY 127.45 (200-day moving average).

Asset Managers have little to show for their efforts in 2011 and they are hoping for a year-end rally. Earnings have been good, interest rates are low, the Fed is accommodative and economic conditions in the US are stable. Stocks are attractively valued at a forward P/E of 13 and money has been flowing out of bonds and into equities. Unfortunately, all of these bullish influences are not able to offset credit concerns in Europe.

The third-year of a presidential term has historically produced big returns. Typically, the incumbent “reaches across the aisle” and both parties work together. This cooperation instills confidence and the market rejoices. That impetus is missing. Politicians are polarized and they could not reach a debt ceiling agreement this summer. That decision was postponed and we are a week away from another deadline.

Newspapers (Wall Street Journal, New York Times and Washington Post) have all reported gridlock within the Super Committee. If they don’t reach an agreement, mandatory spending cuts will begin. The process has been difficult to watch and Moody’s and Fitch stand ready to downgrade our credit rating if an agreement is not reached. Remember, S&P downgraded US debt just because of the indecision. A downgrade would send another shockwave through the stock market.

Rumor has it that Democrats would agree to $600B – $800B in revenue increases and that is down from the $1T they were looking for. They would outline some of the tax increases and the rest would be left for Congress to hammer out. Republicans want to see entitlement reform and I have not heard of any progress on that front. Both sides are distant and it feels like “the can will get kicked down the road”.

The deadline is November 23rd, but the Congressional Budget Office needs two days to review the plan. That means that an agreement needs to be reached by Monday. Politicians can’t make tough decisions and the entire process will weigh on the market. The Super Committee is a microcosm of what’s happening in Europe.

Greece’s Prime Minister has been trying to prevent default. Strict austerity measures had to be enforced if they were going to get their next bailout payment from the EU. Politicians did not like the terms and they were prepared to vote against the austerity plan. The Prime Minister knew that this would kill any chances for bailout money and he threatened to have a public referendum were citizens would vote to leave the EU. This news rattled markets two weeks ago because it would guarantee a default. A general vote would take too long and Greece will run out of money in a few weeks.

The point to all of this is that politicians can’t make tough decisions. These problems were not caused by the old Prime Minister and a new Prime Minister won’t change anything.

Italy has gone through a similar process. Prime Minister Berlusconi needed to pass an austerity plan and he needed to raise the retirement age. These mandates were given by the EU. When he tried to raise the retirement age, members of his cabinet physically attacked each other. Politicians grew angry and a no-confidence vote was held. Berlusconi promised that if he survived the vote he would step down if a budget was drafted and approved. The new Prime Minister has been appointed and he is recruiting his cabinet.

The troika (EU/ECB/IMF) warned Italy. If they do not see budget cuts and austerity, they will stop supporting their bond auctions.

This backdrop is very important because many countries will go through a similar process in coming years. Politicians can’t make tough decisions and they will postpone the process as long as possible. Ultimately, market forces will coerce them to take action.

Interest rates in Italy and Spain have spiked. They are near the highs of the year and both countries have huge amounts of debt to rollover in the next year (Italy $300B Euros). Capital costs have escalated and the ECB can’t contain yields. In a Reuter’s article this morning, the Lisbon Council ranked France 13th out of 17 in terms of overall economic health. It is an EU cornerstone and interest rates have climbed to the highs of the year. France is backstopping “Club Med” and they could lose their credit rating.

Here’s where we stand. Leadership changes in Italy and Greece won’t change a thing. Spain has elections on Nov 20th and a change there won’t matter either. Credit spreads are widening and default risk is getting priced in. The ECB has cut sovereign bond purchases by 50% in the last week and Germany wants to stop them all together. The EFSF won’t be us and running for another month so and interest rates are likely to climb.

This is the third time the market has rallied to SPY $127.50 and failed. Asset Managers are not worried about missing a year-end rally at the high end of the range and they will wait for a pullback.

The economic news has been stable and it is not a factor at this stage. I believe the market will pullback over the next week. The Super Committee and Euro bond auctions will weigh on the investors, flushing bullish speculators out. Depending on how issues are resolved, we might get a small year-end rally, but I believe the highs are in.

I am long puts and I will continue to hold them as long as the SPY is below $127.50. If the market sells off, I will lower my stop. One bad news item from Europe is all it will take to send stocks lower. Asset Managers will pull their bids and we will hit an air pocket. Once the market finds support, a buying opportunity might present itself into year-end. 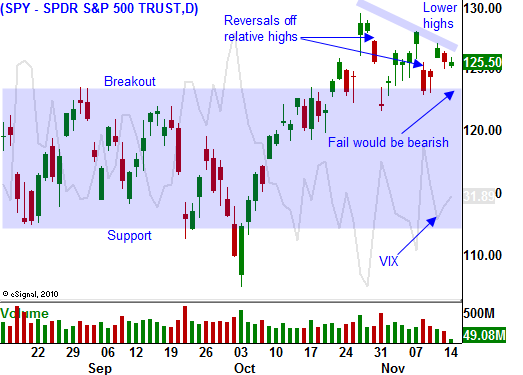