Early Rally Will Stall – Weakness Into the Close. Follow Through Selling Into the Weekend.

If my advice to stay short has paid off for you this week, please take a few moments to review my blog on Investimonials. I don’t advertise on my site. I put countless hours into my research and your comments motivate me. You can post your review of this blog on Investimonials if you CLICK HERE.

Yesterday, I sensed that bulls were getting tired and that they might pull bids late in the day. The rally was starting to waver when Fitch posted a news release. It said that US banks would suffer if European credit concerns weren’t contained to PIIGS. This was not new information, but the reminder spooked investors. The S&P 500 closed 19 points lower and it penetrated support at 1250.

The market was prepared to go down, it just needed a reason. Interest rates in Europe are on the rise. Spain held a 10-year bond auction and the results were poor. Yields jumped from 5.43% in October to 6.98% and the bit to cover fell from 1.76 to 1.54. Yields have spiked to their highs of the year.

Interest rates in Italy and Greece have also been climbing and yields in Belgium broke out to a new high for the year. France is an EU cornerstone and it has not been spared. It held a bond auction last night and five-year bond yields rose to 2.82%. That is a .5% increase in less than a month. This is exactly what contagion looks like.

France and Germany have been arguing over the role of the ECB. It has been passively buying sovereign debt in the secondary market and France believes it should have a bigger role (Germany does not). The EFSF won’t be operational for another month and interest rates will continue to push higher. Italy has €30 billion of debt to rollover before the end of the year and the demand will be light.

European banks have their backs against the wall. They are struggling to obtain eligible collateral to post at ECB repos. Many are lobbying the ECB to broaden the pool of eligible collateral. Liquidity is becoming an issue. Two months ago, the ECB pledged €120 billion in dollar denominated assets. Global central banks pitched in to avoid a liquidity crunch.

Conditions continue to deteriorate and new prime ministers in Italy and Greece won’t matter. The old Prime Ministers were ousted when they tried to fulfill promises made with the troika (EU/IMF/ECB) to secure bailout money. Structural problems need to be addressed and as soon as the topic comes up, the fighting begins. The “honeymoon” for the new prime ministers will end soon and protests are already planned in Greece.

The Super Committee’s deadline is quickly approaching. Major news sources (Wall Street Journal, Politico, New York Times and the Washington Post) are reporting gridlock. At best, we can hope for a half-baked solution that agrees to dollar amounts for tax hikes and spending cuts. That plan will be put back to Congress so that the details can be hammered out. We could also see accounting gimmicks and robust economic projections. This outcome would lead to a credit downgrade by Moody’s or Fitch in coming weeks.

If the Super Committee can’t reach an agreement, $1.2 trillion in spending cuts will be forced. President Obama and Speaker of the House Boehner are willing to let that happen. This solution might preserve our credit rating because it demonstrates that we are committed to making the cuts. However, if Congress overrides this mandate, credit agencies will take action.

Inflation has stabilized in China and many analysts believed that they would ease monetary policy. Chinese officials have splashed cold water on that theory. It was difficult for them to contain inflation and they need to see stability over a period of time before they ease.

The economic news from Europe has been dire and I believe they are already in a recession. That will reduce tax receipts and deficits will expand. Conditions in the US and China have stabilized, but growth is lethargic. This morning, initial claims came in at 388,000. That was better than expected and it is the third consecutive week of improvement. The market rallied slightly after the release. Unemployment remains high and 100,000 new jobs per month won’t even cover new entrants into the workforce.

Earnings are winding down. Retailers have dominated the scene and the results are dismal. Revenues are up, but margins are down due to discounting and the guidance is weak. After the close, AMAT and NTAP reported. Both stocks are sharply lower and the guidance was weak. This news will weigh on the tech sector.

European credit concerns are growing and the Super Committee is in gridlock. These two issues will weigh on the market into next week. Euro interest rates will continue to climb since the ECB is taking a passive role and the EFSF is not operational. The reports out of Washington have been negative and it looks like the Super Committee will whiff.

Many Asset Managers were caught flat-footed and they did not participate in the rally a month ago. They feared that they would miss a year-end rally and they were playing catch-up. That explains the strong market bid the last few weeks when the news out of Europe has been concerning.

Stocks have stalled at the upper end of the trading range and the likelihood of a big rally has decreased. Asset Managers will pull their bids and they will try to buy stocks on a dip once support is established. Bullish speculators that bought the breakout are near their breaking point and they will bail on long positions if the market declines from here.

Market risk is high and one little news event like the one yesterday can spark a sell-off. I believe investors will head for the sidelines ahead of the Super Committee’s decision next week. I am long puts and I will maintain my position as long as the SPY closes below 125 (I have lowered my stop to my breakeven point). The market has tried to break out 3 times and it has made a series of lower highs. Look for selling late in the day and follow through tomorrow.

The decline could be fast and furious. Once prices stabilize, we are likely to see a small rebound into year end. 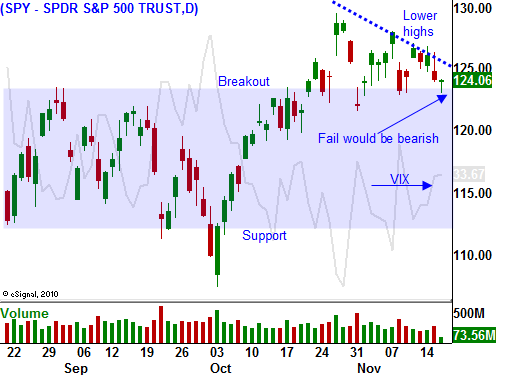