Early Rally Will Fade. Try To Maintain Short Positions Over the Weekend.

Yesterday, I told you the early rally will fail and to get short (same advice today). When I published the blog the S&P was up and it finished 19 point lower for the day. If my advice has paid off for you this week, please take a few moments to review my blog on Investimonials. My goal is to hit the number one spot and I am close. I don’t advertise on my site. I put countless hours into my research and your comments motivate me. Please help me reach my goal. You can post your review of this blog on Investimonials if you CLICK HERE. Thank you!

Thursday, stocks declined throughout the entire day. European credit concerns and gridlock in Washington overpowered cheap stock valuations and seasonal strength. The SPY closed below major sport and the selling pressure will return later today. Traders don’t want to go home long when it looks like the Super Committee will whiff.

According to major news outlets, both sides are distant. From my perspective there are three likely outcomes and the probability for each is equal. Two of the three would lead to a credit downgrade.

First of all, the Super Committee could agree to dollar amounts for tax revenues and spending cuts. They would pass that guideline back to Congress where the details would be hammered out over the next few months. This solution would be filled with accounting gimmicks and rosy economic projections. The process stall and ratings agencies will see right through the smokescreen.

Next, Republicans and Democrats could simply throw up their hands and resort to the mandatory $1.2 trillion in spending cuts. President Obama and Speaker of the House Boehner have already indicated that they would let this happen. Moody’s and Fitch would see that we are committed to balancing the budget and our credit rating would probably be preserved.

In the third scenario, the Super Committee ends in gridlock and Congress steps in to prevent the automatic spending cuts. Senators like John McCain are already trying to pass legislation that would block the spending cuts. They don’t want to see the Pentagon’s budget slashed. If this transpires, it will definitely lead to a downgrade.

The deadline might be November 23rd, but the Congressional Budget Office needs two days to score the plan. Consequently, the deadline is actually Monday. I believe there is a 67% chance that our credit rating will be downgraded by the end of the year and that will weigh on the market.

Credit concerns in Europe continue to escalate. Spain held a 10 year bond auction this morning and the results were poor. Interest rates on the €3.6 billion offer rose from 5.43% a month ago to 6.98%. The bid to cover fell from 1.76 to 1.54. The ECB has been more passive in bond purchases over the last week. Germany and France are arguing over the ECB’s role and the EFSF will not be operational for another month. Euro interest rates are breaking out to new highs for the year.

The list of trouble spots continues to grow. Greece, Ireland and Portugal are old news. Now Spain, Italy, Belgium and even France have entered the fray.

European banks are on the ropes. They had two years to take write-downs and to raise capital but they chose not to. Now the situation is dire and there is a liquidity crunch. Banks are running out of eligible capital to post for repos. They want the ECB to broaden the definition so that they can pledge junk to secure loans.

European politicians are slow to act and the storm is upon them. The signs of contagion are widespread and one event can break the dam open. The EU is fragmented and it won’t be able to react to a crisis.

Stocks are trading at a forward P/E of 13. Balance sheets are strong and interest rates are near historic lows. Given these fundamentals, the market should be able to rally like mad into the year-end. When it can’t, a massive warning flag is raised. I saw this same type of price action in 2007.

Asset Managers that missed the early rally are trying to catch-up, creating a bid to the market. Other managers are trying to take advantage of the seasonal strength and they are trying to reduce equity exposure while the “going is good” (selling into strength). The managers who are trying to catch up are seeing that they can buy all the stock they want and the fear of missing a year-end rally is fading. Now they will be more passive and they will wait for a dip.

I believe we will see a decline over the next 10 days. European credit concerns will escalate as interest rates rally. The ECB is passive and the EFSF is not operational. We are likely to see the Super Committee strikeout. Politicians will flee Washington like cockroaches to spend time with their families over Thanksgiving and the problems will fester. Retailers have been providing cautious guidance and Black Friday will disappoint. The discounts will be deep and the sales will inch higher. Most consumers will postpone purchases as long as possible.

I am going against the grain on this call. Normally, the market rallies into holidays and year end strength typically produces a nice rally next week.

In December, Europe will make a few strides and Washington will make promises it can’t keep. The market will rebound slightly and we should finish right around this level.

In the next week I believe we could test the middle of the old range SPY 115 – 117. From there we will probably rally back to this level into year end.

Today, bulls will try to get something going early in the day. By mid-afternoon, the bid will weaken and stocks will decline into the close. This is option expiration so anything can happen. I see the threat of a Super Committee deal over the weekend as slim.

The SPY is right at the 100-Day MA 122.60 and that resistance should hold. If by some miracle the market rallies and it closes above SPY 124, I will exit my put positions. That level will assure a profit and I will wait for the next opportunity to get short. I am a bit out of my comfort zone shorting the market during this time frame and I suspect that this is true for many other seasoned traders. Normally I am long, but these are unusual times.

Try to maintain put positions throughout the day. I believe you will be rewarded. 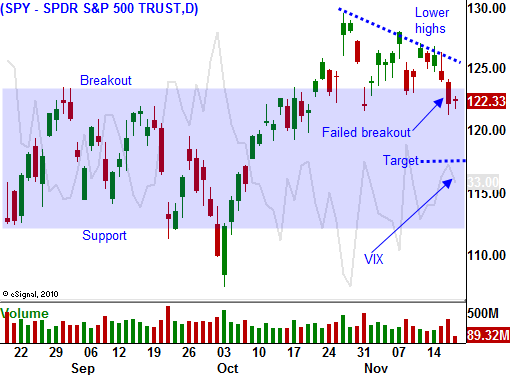