We’ve been short for over a week and I know many of you are making money. If my advice has paid off for you, please take a few moments to review my blog on Investimonials. My goal is to hit the number one spot and I am close. I don’t advertise on my site. I put countless hours into my research and your comments motivate me. Please help me reach my goal. You can post your review of this blog on Investimonials if you CLICK HERE. Thank you to all those who have posted reviews, it really makes this worthwhile for me!

Last week, the market drifted lower on European credit concerns and gridlock in Washington. The damage was rather contained, but technical support at SPY125 was breached. Seasonal strength provided a bid last week, but this morning Asset Managers are backing off. Credit markets are seizing up and risk levels are elevated.

As expected, the Super Committee could not reach a decision. Republicans and Democrats spent the weekend bashing each other on TV. Automatic spending cuts will take place if they can’t find middle ground by Wednesday. President Obama and Speaker of the House Boehner are willing to let this happen.

If the $1.2 trillion in spending cuts is executed, our credit rating might remain intact. However, members of Congress are already trying to pass legislation to prevent that from happening. If the spending cuts are blocked, Fitch or Moody’s will downgrade our debt.

France is considered a cornerstone in the EU. This morning, Moody’s said that rising interest rates could be negative for the country’s credit rating. France tried to get ahead of the curve by instituting austerity measures, but they were insignificant relative to the deficits.

I’ve been saying for months that we need “dead bodies” before the crisis escalates. Greece, Ireland and Portugal have already been bailed out. Now the cancer is spreading to major organs (Italy, Spain and France). This is what contagion looks like.

The ECB is flat-footed and it has been passive during sovereign debt auctions recently. It does not want to be the buyer of last resort and the EFSF is not operational yet. European officials had the opportunity to forge a plan this summer and they went on vacation instead. The market stewed for months and the uncertainty wreaked havoc.

Not one dime has been raised by the EFSF or by European financial institutions in recent months. Bank balance sheets are weak and under new Basel requirements, 21 of 28 would fail. They have been sitting on toxic assets and sovereign debt since the 2009 financial crisis and they refused to take write-downs. The day of reckoning has arrived and international banks are selling European assets.

Credit spreads are widening across the board and European banks are close to a liquidity crisis. A few months ago, central banks pledged $120 billion to help European banks get through this tough period. That guarantee has not helped and international banks are selling European assets to reduce risk.

Corporations have strong balance sheets and they are hoarding cash. They see the storm clouds on the horizon and they are not reinvesting. Consequently, job growth has tapered off and economic activity is barely treading water.

China’s Finance Minister warned that the world is heading into a long-term recession. He also said that the Chinese financial sector is facing structural problems. Those comments were not typical and they are concerning. The Wall Street Journal reported that China had its first monthly outflow of foreign currency since October 2007. China did not let the Yuan float as many expected and now investors are pulling their money out.

Tomorrow we will get our first revision to Q3 GDP. It came out at 2.5% and that was better than expected. The regional economic statistics have been decent and I believe GDP will hold that level. Tomorrow afternoon, the FOMC minutes will be released. There was one “dovish” dissent and I believe the news will be slightly bullish.

Wednesday morning, we will see the reaction to flash PMI’s from Europe and China. China will hold its own, but Europe will raise red flags. As economic conditions deteriorate, deficits will balloon. These releases will weigh on the market and the not so super “Super Committee” will disappoint investors when the miss the deadline.

The bottom line is that all the money in the world won’t fix the European credit crisis. First they need to address structural issues and “plug the hole”. Then austerity and fiscal prudence over a period of decades can repair the damage. Politicians won’t touch entitlement and the problem will continue to grow. The market knows this risk is getting priced into the bond market.

We have the same problem in the US and Democrats won’t even consider changes to Social Security or Medicare.

The payroll tax credits are slated to end on Dec 31st. Both parties want them to continue, but we have not cut any expenses to free up the money. This issue will also weigh on the market in coming weeks.

This is a holiday shortened week. Retailers reported mediocre earnings last week and I believe consumers will hold off purchases as long as possible. That means Black Friday could have a negative impact on the market. The true test will come a week from today when the results are in for the entire weekend.

European markets will be open the entire week and they have been tanking. Traders will error on the side of caution and they will exit long positions now. Asset Managers are more passive and they will wait for bona fide support. They are no longer worried about missing a year-end rally.

Given all of the news, I am confident that we are on the right side of this trade. STAY SHORT. I have lowered my stop. If the SPY closes above 123, I will exit my shorts. That will lock in profits and I can re-evaluate. I don’t believe I will get stopped out this week.

The momentum is bearish today. Look for stocks to close near their lows. We could see a small rebound tomorrow and continued weakness Wednesday. 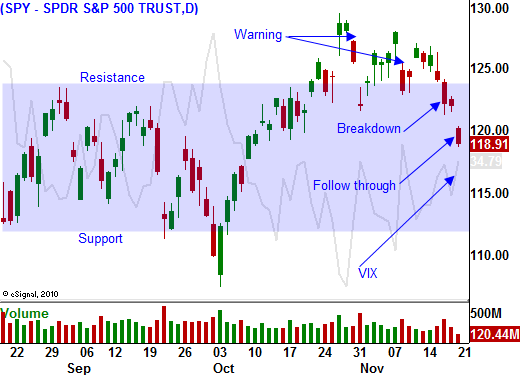