Thank you for posting your reviews on INVESTIMONIALS. Your comments really mean a lot to me.

The market has broken technical support and the momentum clearly points lower. During this holiday shortened week, I believe traders will head toward the sidelines and that will increase the selling pressure the next two days.

For the last couple of weeks, stocks have had a tendency to open lower due to weakness in Europe. Once European markets close, stocks recoup some of the losses. US stocks and bonds have become a global stronghold. Our markets will be closed on Thursday and we won’t be there to provide a backstop if other markets slip.

This morning, the second revision to Q3 GDP was released. Growth dropped from 2.5% to 2% and the S&P lost five points on the news. The decline in activity will weigh on stocks today. Midday, the FOMC minutes will be released. There was one descending “dovish” vote and the news should be market neutral.

Overnight, flash PMI’s from China and Europe will be released. China’s economic growth has stabilized at a lower level and the news will be decent. They have started to loosen bank reserve requirements and that is a good sign. Yesterday, their Finance Minister made very negative comments about a long-term global recession and financial problems within China. Perhaps they will start to ease.

The news from Europe will be dismal. Recent economic releases indicate that the EU is already in a recession. GDP forecasts for the entire region in 2012 are below .8%. Last night, Hewlett-Packard posted disappointing results. One take away is that ink sales in Europe are down 36%. That is a business staple and it is another warning sign. Europe’s flash PMI will weigh on the market tomorrow morning.

The news is pouring out of Europe and none of it is good. Spain’s bill auction did not go well and 10-year yields have spiked to their highs of the year. Hungary is now asking the IMF for help. US money market funds are reporting that risk exposure to Europe declined 9% in October. That means they are pulling money out of short-term instruments and the liquidity in Europe is drying up. Euro zone banks have decreased lending to Eastern Europe and emerging markets. Credit spreads are widening and the landscape is littered with warning signs.

European interest rates are climbing across the board and the ECB is sitting on its hands. The EFSF is not operational and it won’t be for at least a few more weeks. The problem is so big and the EU is so fragmented that leaders don’t know where to start.

The political scene is not much better in the US. Republicans and Democrats are polarized and they could not trim a measly $1.2 trillion out of our budget over the next 10 years. Mandatory spending cuts will automatically kick in a year from now and defense spending will account for almost half of the reduction. If we cut out every single government agency, our tax revenues would just cover entitlement (Social Security, Medicare and Medicaid) and interest expense. The problem is structural and it will escalate in coming years as baby boomers retire.

The solution is higher taxes and entitlement reform. Without both, we will sink further into this debt spiral each year. Republicans and Democrats won’t budge an inch and they both need to make massive concessions. Financial markets won’t let us stick our heads in the sand for another year. Our budget deficits need to be addressed before the election. It sickens me to think that our leaders could be willing to wait a year before taking action.

Fitch said that it won’t downgrade our credit rating, but it might lower the outlook to negative in coming weeks. If the US is considered a safe haven, imagine how dire the conditions are elsewhere.

Asset Managers that missed the early rally were playing catch up in November. During a year of miniscule returns, they worried that a year-end rally was about to pass them by. They aggressively bid for stocks and they were able to “catch the train”. As the storm clouds rolled in, other Asset Managers were selling into strength. They wisely reduced risk while the “going was good”. That is why the market ran up to resistance twice and failed to break out. Now the latecomers have pulled their bids and no one is worried about missing a year-end rally.

The momentum clearly points lower. We will hold our put positions throughout the week. The bad news keeps mounting and it is surrounding us. I sense that stocks could have a major decline later today. The news tonight should keep the selling pressure on tomorrow. Black Friday’s results will look decent on the surface, but margins will be low because of deep discounting.

I will place a closing stop at SPY 123. If that level is breached (very unlikely) I will take profits and I will look for another entry point.

For the rest of the year, I believe we will see an air pocket with heavy selling and a capitulation low. Stocks will rebound for two or three weeks and we will make a lower high (SPY 125?). If Europe can’t devise a game plan to shore up credit concerns, the market will rollover quickly. There will be a couple of nice opportunities before 2012. 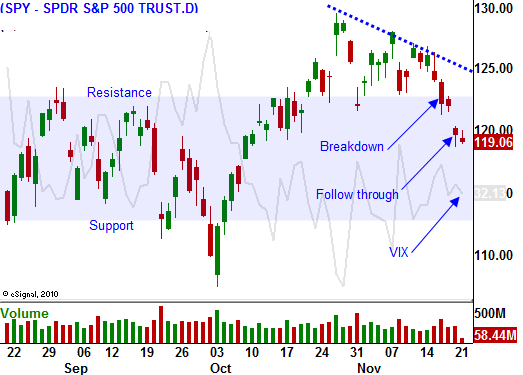