The Bad News Is Getting Worse. We Could Easily Test the Lows of the Year!

If my analysis is helping you make money, please post your reviews on INVESTIMONIALS. Thank you to those of you who have posted comments. They really mean a lot to me.

The market continues to slip during one of the most bullish periods of the year. Bad news surrounds us and conditions are deteriorating. The SPY has reached my short-term target very quickly and my forecast is turning more bearish.

Interest rates in Spain and Italy are jumping. That is not new news, but it is concerning because these countries are too big to bail and too big to fail. The yields have reached the point of no return and financing costs are going through the roof.

Greece has enough money to last 20 days and it has not secured a bailout loan. Rumor has it that the troika (ECB/IMF/EU) wants each party to commit in writing that they will abide by the austerity guidelines.

The new twist comes from interest rates in other countries. France is an EU cornerstone and its rates have been inching higher for weeks. Their economy is weak and deficits will grow. We are likely to see a credit downgrade in coming months.

Overnight, Germany held a bond auction and it went poorly. This is the first time we’ve seen interest rates in Germany move higher. Ten-year bonds are trading 13 basis points over US bonds. Contagion is spreading throughout Europe as investors flee.

Yields in Belgium are skyrocketing. A few weeks ago, Dexia (medium sized bank) said they will need a bailout. France and Belgium said they would fund it and now Belgium says it doesn’t have enough money. France’s Finance Minister stated that they will not put any more money into the bank. This could lead to a bank failure.

Yesterday, Hungary contacted the IMF and asked for bailout money.

As I reported yesterday, US money market funds have been reducing exposure in Europe and risk is down 9% in the last month. These are very liquid short-term obligations. This means US banks are doing less repo business with Europe and liquidity is drying up. Italy has contacted the ECB and they want them to broaden the collateral they can pledge (because they have run out of “good” collateral).

Two months ago, global central banks pledged $120 billion in funds to help European banks get through a “soft patch”. That support won’t scratch the surface if international banks stop transacting business with European banks. This morning, Moody’s warned that a confidence crisis is threatening to shut down interbank lending. That’s another way of saying that a credit crisis looms.

Yesterday, our GDP declined to 2% from 2.5%. That is a major revision and it indicates that economic conditions are weakening. This morning, durable goods orders fell .7% and initial jobless claims came in at a decent 393,000.

Europe’s flash PMI was better than expected, but it was weak at a reading of 47.2. The real shocker came from China. Their flash PMI dropped from 51 in October down to 48. A reading below 50 indicates economic contraction. This news has been swept under the carpet and it could be a major warning sign. Monday, China’s Finance Minister described a global recession that would last years and he hinted that China might have structural problems within its banking system. Most likely, he was referring to regional issues.

China has been the growth engine globally and if their economy rolls over, it will throw everyone else into a tailspin. I believe Europe is already in a recession.

With all of the other issues, we don’t even need to discuss the idiots running our country. A handpicked bipartisan “Super Committee” of 12 politicians couldn’t cut a measly $1.2T from our budget over the next 10 years. Four months were wasted and the automatic spending cuts won’t happen for another year. That means we will spin our wheels until the 2012 elections. Immediate action needs to be taken (tax increases and entitlement reform) and like Europe; we are incapable of making tough decisions.

A new problem will hit Washington in coming weeks. Unemployment benefits and payroll tax credits won’t be extended after 2011. President Obama is urging Congress to extend these programs and Republicans want concessions before they sign off. Furthermore, the current spending resolution expires on December 16th and many agencies will run out of money if no action is taken.

As I said earlier, the bad news is getting worse. US markets have been strong relative to global markets and we will be closed tomorrow. That means that if conditions worsen in Europe, we won’t be there to backstop fear. Traders know this and they will buy protection (puts) or reduce risk (sell stock) ahead of the holiday.

We are on the ride side of this trade and we will ride the wave. We have been long puts for two weeks and the profits are mounting. There is no need to bail out or take profits until we see a major air pocket and an intraday reversal. This has been an orderly decline and I now suspect that the lows of the year could be tested. The problems are growing and there is no solution in sight. A part of me is happy because my short positions are making money, but another part of me is scared shitless. This could be the beginning of a full blown credit crisis.

To this point, I thought we would retrace back to the middle of the range (SPY 115 – 117) and have a nice little year-end rally back to SPY 123. Now I am not so sure. Conditions are deteriorating so quickly that I now believe we could test the lows of the year and we might break support. We will see an air pocket and a small snap back rally. However, unlike the low we saw in October, I believe the rally back will be a trap. Bargain hunters will establish support and shorts will take profits. That rebound will quickly lose its steam and anyone who still needs to reduce risk will sell into that strength.

Back in October, we still had the prospects of a year-end rally, a grand bargain in Europe and a plan from the Super Committee. That was also before Euro interest rates spiked and Euro bank liquidity dried up. Now all of that is off the table and the bounce will quickly reverse.

Stocks should drift lower all day and close on their lows. STAY SHORT!!!

Forget the woes of the world tomorrow. Rejoice with friends and family and be thankful for all that you have. 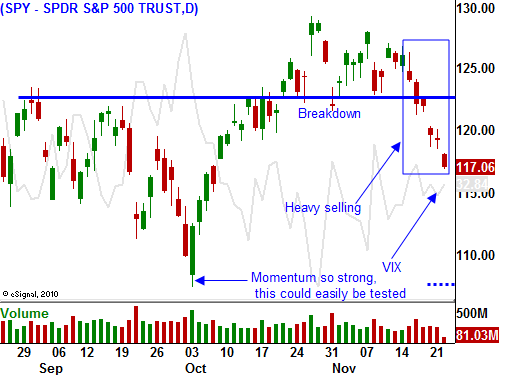