Stocks have rallied more than 8% in the last five days. In a coordinated effort, central banks agreed to provide the ECB with an unlimited amount of dollars. That release sparked a massive round of buying and fear has temporarily subsided.

This same news was released two months ago, but this time around the Fed reduced interest rates by .5%. This is not a loan, it’s called a swap. The ECB still has to pledge Eurodollars to get US dollars. International banks and money managers were pulling assets out of Europe and they were dangerously close to a financial crisis. The EU dragged its feet and if not for central banks, the picture this week would be much different.

Having been to the brink, Eurocrats might have temporarily found religion. The rhetoric has been stepped up and all sorts of plans are being considered. The ECB might lend money to the IMF and the IMF would disperse the bailout money. There is also talk of universal fiscal policies across the entire EU. The markets like what they hear and the year-end rally is underway.

Unfortunately, nothing has really changed. Past behavior tells me that all of these grandiose plans won’t amount to anything. Fiscal policies needed to be in place when the EU was formed. Now, more than half of the countries would already be “underwater” if any reasonable deficit levels were agreed upon. Member nations would have to immediately raised retirement ages and reduce spending. The countries in need will never agree to these policies since it will cause civil unrest. This process will drag on for years without a policy or means to enforce it.

We have a policy here in the United States that is not being enforced. Under the Constitution, states cannot run deficits and they are more than $400 billion in debt. That number continues to grow each year and public pensions are sucking them dry. A few weeks ago, we had the largest muni bond default ($3 billion) in US history. That news was quickly swept under the carpet and I have not heard another word about it. Expect more defaults in 2012.

Let’s consider the “pool” of funds that could be allocated to European bailouts. The IMF has $385 billion. Its function was to help developing Third World countries, but let’s say that they give the money to Italy. The EFSF has another $250 billion that is uncommitted. Analysts estimate that Italy could require $1 trillion and the total “pool” won’t even cover that. What about Spain, Belgium, Portugal, Hungary… ?

Today the Chinese Finance Minister said that they don’t have any money to help Europe. They have $3 trillion in reserves, but many analysts believe they have less than $500 billion in cash. Yesterday, Fed Official Dick Fisher said that the US would not lend any money to bail out European banks even if they have substantial operations in the US. Treasury Secretary Geithner has also said that Europe needs to take care of its own problems. Japan is up to their eyeballs in debt. The point is that global economic powerhouses are tapped out.

Since the “grand bargain” was announced, not one dime has been raised by the EFSF. The reason, countries that would be contributing would also be drawing and the burden would fall on a handful of strong EU nations. They are done giving and countries like Finland want collateral for new loans.

European banks have not raised capital either. The costs are too high. A medium-sized bank (Dexia) said that they will need more bailout money and Belgium said it can’t help.

Interest rates in Italy, Spain, Hungary, France and Belgium have skyrocketed. The temporary reprieve is nice, but this “lip service” is not going to fool international money managers. They have been pulling funds out of Europe like mad and they don’t want to be the next MF Global.

Japan could be the next powder keg, but I’m not going to get into an in-depth discussion on that. Interest rates have quietly been creeping higher and if they increase just 2%, total tax revenues won’t cover interest expense. Think about how dangerous that situation is. Interest rates would not have to go to 7% as they are in Italy, they would only have to go to 2.5%

Congress has a new battle and they are trying to extend payroll tax credits and unemployment benefits. Both parties want this and they should be able to find middle ground. They have a few weeks to figure it out and a vote failed last night. If they can’t agree, this simple agreement serves as a major warning sign for 2012.

The economic releases have been decent, but they are far from robust. In November, 140,000 new jobs were created. We need 250,000 jobs just to keep pace with labor growth. GDP growth in the third quarter is 2% and that is barely above the inflation rate (no real growth). ISM manufacturing was better than expected, but it is hovering just above 50.

Europe posted a very weak PMI this week and I believe they are already in a recession. China’s PMI came in below 50 indicating economic contraction. They responded by lowering bank reserve requirements for the first time in three years and that news (not the PMI) grabbed all the headlines.

On a long term basis, nothing has changed in Europe and the credit crisis will flare up soon. Developed nations are addicted to debt and they will make huge promises to get the next “fix”. They won’t fulfill promises and eventually, the market will force action (financial crisis). Until Europe, the US and Japan are forced to take action, they won’t.

Stocks are cheap and they will rally as long as the fear of a financial crisis is low. Year end strength will act as a catalyst for another two weeks. Europe will go on holiday with lots of loose ends and interest rates will creep higher.

I believe the smart money will sell into strength and the rally will stall before it gets to SPY 130. The safety net provided by central banks should hold through December option expiration. I like selling put spreads while I wait for signs of resistance.

I am not overly anxious to get back into a short position ahead of year end and I hope we see a blow off rally. That is not likely, but it would set up a fantastic shorting opportunity.

Find strong stocks that have major support levels. Sell put spreads below that support for added protection. If the SPY closes below 123, reel them back in.

Look for a light volume grind higher over the next week. Watch for signs of resistance as we approach SPY 130. 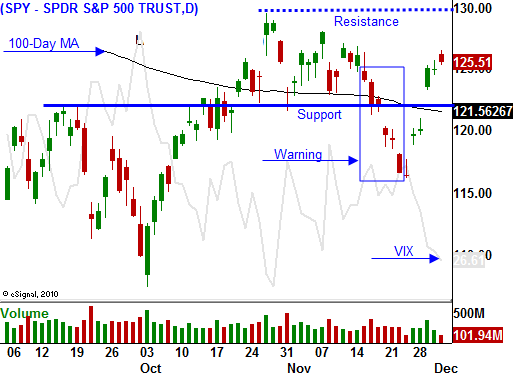