“Sweet Nothings” From the EU Calm Nerves. Year-End Buying Will Subside In A Week.

Last week, the market staged one of the biggest rallies I can recall. Stocks shot 8% higher on news that Europe is getting serious about its credit crisis and central banks are going to provide unlimited liquidity. The news pacified investors and year-end strength has pushed the market up to a major resistance level.

The promises out of Europe are mere lip service. The ECB will supposedly raise €1 trillion if the EU can agree to new fiscal policies. The ECB will also increase its bond buying if it is protected from any possible losses. European leaders are meeting in Paris this week and Angela Merkel wants all 27 EU leaders to agree to stricter budget disciplines.

I believe that the EU found religion last week when financial institutions were pushed to the brink. Officials are saying all the right things, but they won’t be able to execute.

A behavioral pattern has emerged over the last 18 months. Credit conditions deteriorate to the point where action is required. Eurocrats scramble to find a last minute decision and the market rebounds (because stock valuations are cheap). The solution is not voted upon for a few months and conditions continue to deteriorate. Even if the new plan passes, it doesn’t get executed for many months. Investors get impatient, they sell European assets and the cycle begins again.

Each time we go through this process, the damage is more pronounced. During this last “go round”, interest rates in Italy, Spain, Hungary, Belgium and France shot higher. European banks are strapped with toxic assets and they are very close to a liquidity crunch.

Italy was not getting anywhere with its bureaucrats so they appointed technocrats. Technocrats are basically economists that don’t have a political agenda they look for solutions. They have a proposal drafted to radically cut expenses and to increase the retirement age in Italy. It will be presented to legislators today for a vote by December 25th. This subject was approached in October and a fist fight broke out in the cabinet. I believe this plan will be substantial, but it will get voted down.

When it comes to politics, talk is cheap. In the US, we know that we need to raise taxes, restructure entitlement and cut spending. We tried to do it in August and we failed. The Super Committee tried again in November and it failed. There is a movement in Congress to stop the mandatory $1.2T in spending cuts a year from now.
The market will have to wait until November 2012. After the elections, months will pass before any serious discussions take place. In 18 months, conditions will deteriorate even further and rhetoric is all we will be able to hang our hat on.

The economic statistics are not all that great. Friday’s Unemployment Report looked strong on the surface. If you consider that 230,000 jobs need to be added just to keep pace with the workforce, 140,000 jobs is not so “hot”. Furthermore, private sector jobs saved the day and more than one third of those jobs were in retail/restaurant sector (low-quality). Also consider that 300,000 job seekers were removed from the labor pool because they “gave up”.

The PMI numbers from Europe and Asia were weak. Our GDP was revised lower by a substantial margin. ISM manufacturing and ISM services are stable, but they hover above zero growth. As economic conditions weaken, tax receipts decline and deficits grow.

The economic news is out of the way and credit fears have subsided. Asset Managers are buying stocks into year-end. The volume is light and the conviction is low. Stocks are right up on resistance and I believe the “smart money” will start to sell into strength in a week. I am not looking for a major decline, just resistance.

Remember, 10 days ago we were on the brink of a financial crisis. European officials will say all the right things this week and then they will go on holiday. When it comes to signing an agreement months from now, we can expect gridlock. The EU needs a unanimous vote to pass the policies and this is highly unlikely. The ECB knows that no one will buy €1 trillion worth of Eurobonds if structural issues have not been addressed. Months from now, Europe will not be any closer to a solution, but they will be closer to crisis.

There is nothing to stand in the way of this rally. Stocks will inch higher on light volume this week. If the momentum stalls, it will be a sign that Asset Managers are starting to take profits.

Sell out of the money put spreads on strong stocks. Lean on support (trendlines, moving averages and horizontal support) and sell strikes that are below those levels. That will provide added protection and it will increase your chances for success. We should be able to make it through December option expiration without any major market declines. This strategy will also take advantage of elevated option implied volatilities.

The move for today has run its course and prices have flat lined since the open. I’m expecting a gradual grind higher this week, but resistance at SPY 130 should hold. Over the next few weeks, investors will get anxious. Major European decisions will be pushed into the future and the voting outcome will be uncertain. Watch for the momentum to slow next week. 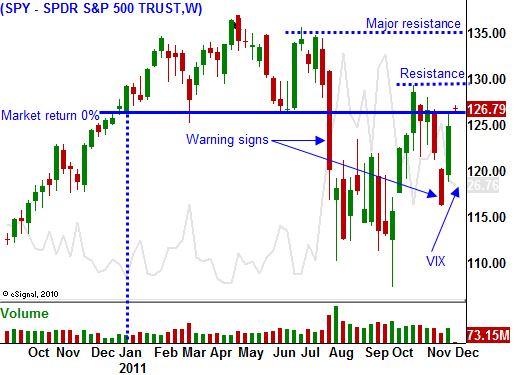