Nothing Has Changed. The Smart Money Will Sell Into Strength. This Rally Might Have 3% Left

Yesterday, the market rallied on news that a coordinated effort between central banks will provide dollars to the ECB. The S&P 500 finished 4% higher on the day, but what does this central bank action really do?

In September, central banks made a similar announcement when European banks were experiencing a liquidity crunch. They said they would stand ready to lend Europe as much money as it needed. This is not really a loan since Eurodollars need to be exchanged for every dollar. The interest rate charged by the Fed was reduced from 1% to .5% and this is technically called a swap.

If the Eurodollar maintains its value, we are simply helping them through a “tough patch”. However, if the Eurodollar declines, the US is stuck with a loss or possibly worthless paper. In essence, we are bailing out Europe by supporting their currency.

According to the Constitution, the ECB can’t print money and Germany (the largest member) is dead set against it. That means that we should not be too concerned about the “printing press” getting turned on. Unfortunately, there aren’t that many Eurodollars floating around to exchange for US dollars.

Banks are straddled with toxic assets and they want the ECB to accept lesser assets as collateral. Imagine them posting sovereign debt to the ECB in exchange for US dollars.

The IMF has also been discussed as a possible solution. It was established by global economic powerhouses to help underdeveloped third world countries. The IMF has $385 billion and Italy is the seventh largest contributor (France is the fourth and Japan is the second). Now, the very countries that are contributing to it are asking for bailouts.

This is similar to the EFSF. Since the “grand bargain” a month ago, not one dime has been contributed to it. That’s because the countries funding it have no money and they need to be bailed out. Last year, Greece, Ireland and Portugal had to contribute to it along with other EU members. The EFSF has about €230 billion of uncommitted funds that it plans to use to insure (the first 20%) sovereign debt. The US accounts for 17% of the IMF and once again, US taxpayers are on the hook.

European banks are in dire straits and Moody’s said that it could downgrade 87 banks across 57 countries in 2012. On a relatively small scale, European bank Dexia needed a bailout and France and Belgium said they would provide the necessary funding. The losses are greater than expected and Dexia will need more money. Belgium said they can’t commit any additional funds. This demonstrates how dire the situation is. European banks have not raised capital because the cost is too high.

The Eurocrats have been dragging their feet for 18 months. They are so incompetent that the Fed had to step in at the last minute to prevent a financial crisis.

As I said earlier, nothing has changed. Massive deficits are piling up and that will continue until entitlement is reformed. Austerity measures will barely scratch the surface and they will result in an economic slowdown. Last night, Europe released its PMI and it fell to 46 indicating economic contraction. I believe they are already in a recession.

The situation in the US is not much better. Just a few weeks ago we had a $3 billion muni bond default in Jefferson County Alabama. Meredith Whitney has been calling for a muni bond crisis and this news was quickly swept under the carpet.

Republicans and Democrats continue to fight and the “Super Committee” could not come to terms. Consequently, our outlook was downgraded to negative by Fitch this week. Unemployment benefits and payroll tax credits will expire at the end of the year and this is the new battle. Both sides want it to happen and they will find a solution. Unfortunately, both programs will push us further into debt.

The economic news has been decent this week. ISM manufacturing came in better than expected this morning and initial claims rose slightly. Earlier in the week, ADP employment showed a nice increase in private sector job growth and Chicago PMI was better than expected. These numbers were not robust, but they were “good enough”. Tomorrow’s Unemployment Report should be market friendly.

We are in a seasonally bullish period and year-end strength is almost impossible to fight. Asset Managers are trying to produce miniscule gains for 2011 and they will attempt to “goose” the market on light volume. The real “tell” will come in another week or so. The smart money will see through the Fed’s smoke screen and they will sell into strength. The market will struggle to climb higher and the resistance will build. This is not normal price action in December.

Typically, stocks run higher on light volume and no one stands in the way. This enhances performance and Wall Street bonuses are bigger so there is an incentive to stay long. When sellers step in ahead of year end to meet that buying, it is a very bearish sign. It means that they are getting out while the going is good. I will be watching for signs of resistance in the next week.

I don’t want to fight the tape and I believe the market could rally another 3%. Option implied volatilities are high and I am selling out of the money put spreads on strong stocks. The Fed has provided a safety net and it should hold through December expiration. I am distancing myself from the action and I will buy my put spreads back if the SPY closes below 123.

The current market conditions remind me of December 2007. We did not have any “dead bodies” (bank defaults), but the warning signs were there. The market declined in November and it snapped back in December. That bounce quickly ran its course and stocks fell sharply the last two weeks. We all know what happened in 2008. Take a look at the chart.

Temper your bullishness. The best trades will be on the short side. 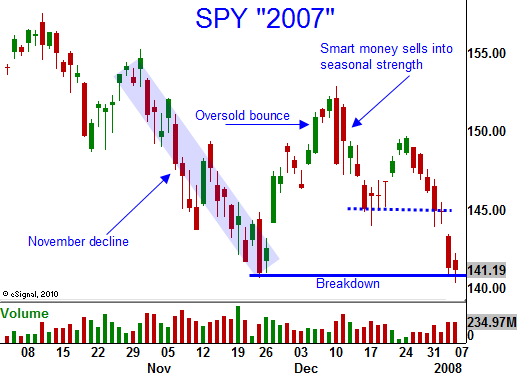