Broad-based EU Downgrades Would Be A Big Surprise. Market Discounting the Likelihood

Yesterday, stocks continued to push higher. Constructive comments from European officials and year-end strength fueled an early rally and the S&P 500 was up 20 points. Late in the day, news leaked that S&P might lower the credit rating for major European nations. That rumor was substantiated after the close.

Standard & Poor’s is not wasting any time and it plans to review the ratings as soon as the December 9th EU summit concludes. The ratings for Austria, Belgium, Finland, Germany, Netherlands and Luxembourg could be lowered by one notch. All others could be lowered by two notches. This is a fairly dramatic move.

The markets are already prepared for France’s outlook to be downgraded to negative this week. However, no one expected and actual downgraded to the credit rating itself. Germany is considered the cornerstone to the EU and this news caught the market by surprise.

The EU was hoping to maintain its AAA credit rating. That’s simply not possible given that stronger nations are preparing to bail out weaker nations. Merkel said that they will move forward with plans to regain confidence regardless of what the credit agencies do.

Talk is cheap and I don’t believe a word coming out of Europe or Washington DC for that matter. Entitlement reform needed to take place decades ago and now we are too far down the road. An aging population is more dependent than ever on the government and politicians don’t have the “stones” to reduce benefits. Yes, spending needs to be cut and taxes need to be raised, but entitlement is bleeding us dry.

The talks will include on Friday and Eurocrats are hoping that all members agree that new fiscal policies need to become part of the treaty. They are not forging the policies; they are just agreeing that they need to be drafted. This is the easy part and I’m not expecting any arguments. European officials will go on holiday as if they have accomplished something and the market will wait.

The specifics of the plan will take months (or years) to draft. This will be a long and arduous process. Member nations will be very vocal about the budget guidelines, consequences and enforcement (especially nations that fall below the watermark). When the proposals are brought back each government, that’s when the fighting will begin. The EU needs a unanimous vote for this to pass and one small bankrupt nation can stall the entire process.

Precious time is wasted during each cycle and conditions continue to deteriorate rapidly. Each failure has a more pronounced reaction (i.e. broad-based interest rate spikes in Europe) and eventually, global markets will rollover. In a best case scenario, it will be at least a year before fiscal policies are added to the EU’s constitution.

Republicans and Democrats will battle each other until the 2012 elections and then another six months will elapse before any action is taken.

Politicians promise to work on a solution in the future and if they reach one, they promise to execute it sometime in the future. The debt ceiling debacle is a perfect example. We couldn’t even trim $1.2 trillion from our budget over the next 10 years and the mandatory spending cuts won’t start for another year. Congress is already trying to block those cuts.

Outside of extending payroll tax credits and unemployment benefits, there is not one action plan that takes effect immediately. Sooner or later, the market will give up hope and it won’t believe one word that comes out of the EU or Washington. I feel we are getting close to that point.

Strong corporate earnings and solid balance sheets are fueling the current rally. Stock valuations are cheap and Asset Managers are praying for a year-end rally. Bond yields are miniscule and the market is barely above breakeven. Investors have very little to show for 2011 and this is the last chance to generate a small return.

Eurocrats are saying the right things and the ECB meeting this week should be “dovish”. For now, the market likes what it hears and fear levels have subsided. Economic releases are not strong, but they are good enough to keep sellers at bay.

Stocks have rallied up to minor resistance. I believe this rally still has 2 to 3% of upside. As we grind higher, the headwinds will start to blow. The “smart money” will reduce risk by selling into strength. That will keep the lid on the market. I am not looking for a major decline, but the momentum should slow.

Good news from the EU meetings is baked in. The S&P downgrade news came very quickly and I don’t believe they will come out with widespread downgrades so soon. If they do, the market will decline. A more likely scenario would yield broad outlook reductions.

Look for a few more days of strength and then watch for signs of selling. Resistance at SPY 130 should hold this week. 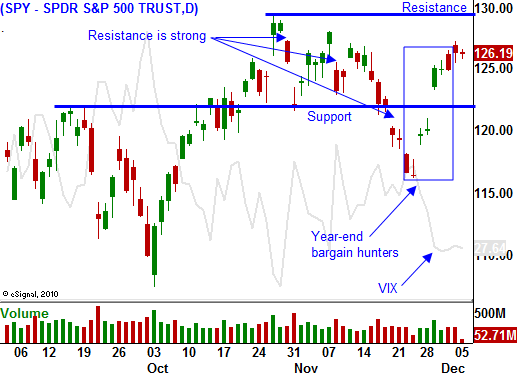