Market Still Has 2 – 3% Upside. Overnight News Should Be Good. Watch For Resistance Next Week

The market has been relatively quiet this week and momentum is pushing stocks higher on light volume. Investors are still holding out hope that Europe will get its act together. After an 8% rally in less than a week, we should expect consolidation or a small pullback.

Stocks are trading lower today and bears need to temper their excitement. A “senior German official” told Reuters that he is more pessimistic now than he was a week ago. He does not see an overall summit deal this week. This should not come as a major surprise. There is no way that 17 nations will reach an agreement on fiscal policies. The fact that they are open to the concept is an improvement and it should temporarily satisfy the market.

European leaders are considering granting the ESM (another bailout facility) a banking license so that it can access hundreds of billions of dollars from the ECB. It could raise another $500 billion and combined with the EFSF funds that are not committed ($230 billion) they would be getting close to $1 trillion. The difference could be made up from IMF loans.

Here’s the burning question. Who is going to finance all of this crap? If the ESM can borrow from the ECB and the ECB has access to the Fed, US citizens are on the hook. Furthermore, the US accounts for 17% of the IMF and any loan would mean that Americans are helping to bail out Europe. If voters catch wind of this during an election year, there will be massive protests. Occupy Wall Street is already protesting the TARP bailout of our own banks. US politicians will strongly oppose this if it goes public.

From my perspective, the EU is going to borrow money from its members (some of which don’t have money). They will leverage the funds to support bond actions for fiscally irresponsible nations that have structural debt problems. The strongest EU members will be asked to pay the bill and they will resist. In order to get the support, weak European nations will have to agree to strict financial policies and they are already below the water line. This whole “shell game” won’t fool anyone.

Major developed nations (US, China and Japan) have problems of their own and they aren’t able to bail Europe out. That means investors are the last resort. Pension funds and Money Managers have been liquidating European assets at an accelerated pace the last few months. They will see right through the current “smoke screen” and they will not jump back in.

At the end of this week, the market could be satisfied with the new sense of urgency in Europe. Unfortunately, the holiday is right around the corner and Eurocrats will go on holiday. There won’t be any follow through, goals or deadlines and fear levels will escalate in January.

The economic statistics are not good, but they are stable. Europe is already in a recession and China’s growth projections have been lowered for 2012. Austerity plans will further reduce economic activity and corporations will not reinvest until they have more clarity.

As the market reaches for SPY 130, the resistance will build. I believe some Asset Managers will reduce risk and they will sell into strength. That will keep a lid on the rally. Late in the year, we could see a decent selloff on light volume. If this happens, it will be a major warning sign for 2012.

Don’t get overly excited about this pullback (it is not time to get short yet). The market is overbought and it needs to consolidate a little before it moves higher. Stocks have already erased losses from this morning and bulls will test the upside. I am selling a few more put credit spreads today, but I’m keeping my risk exposure small. I only have one third of my portfolio exposed and I am comfortable with that risk level through option expiration.

China will release its CPI tonight and analysts are expecting it to drop. That would be welcome news since they would be able to lower interest rates/reduce reserve requirements. Initial jobless claims should be decent and that will also help. The ECB will release its statement and we can expect it to be “dovish”. Some analysts believe that they will lower interest rates by .25%. The overnight news should support this rally.

Stay neutral to bullish and look for signs of resistance next week. The market has 2 to 3% of upside before it runs into trouble. 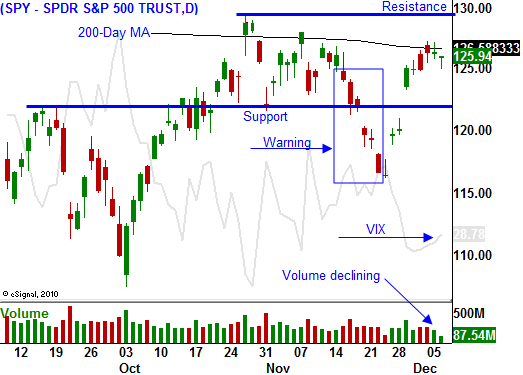