Euro Conference Is Losing Its Luster. If the SPY Closes Below 125 – Get Defensive.

I don’t advertise on my site and I put countless hours into my research. If my market analysis is helping you through these turbulant times, please post a review on Investimonials CLICK HERE. Your comments really make this worthwhile!

The market is waiting patiently for news out of Europe and investors are getting anxious. This morning, the ECB lowered interest rates by .25% and they are increasing liquidity by broadening the assets banks can pledge. In the short term, the market should be satisfied with the developments, but once the dust settles investors will realize that nothing has changed.

The largest developed nations in the world have massive debt and they are trying to figure out how to postpone pain. China’s Finance Minister and our Treasury Secretary have stated that they won’t bail out Europe. The EU conference will end tomorrow and we will learn how a handful of debt laden nations will support the rest.

Imagine having a relative that constantly lives beyond his means. His income won’t cover structured expenses (car payment, house payment, student loan…) and his assets have depreciated. He suggests a collective “rainy day fund” that you can both draw from and you each fund it equally. As soon as the funds are deposited, he needs to borrow from it. Your relative does not plan on selling his house or his car (structural debt), but he promises not to eat out is often and to save money. He urges you to continue adding to the slush fund and you wonder how he is able to contribute when he has already borrowed from it.

The story gets even better when your relative figures out that he can use leverage. He takes out a credit card loan so that he can continue to add to the slush fund. We all know how this story ends.

This is a microcosm of what’s happening in Europe. The EU’s friends (US, Japan and China) are already tapped out so they have to rely on family (internal financing). Germany is the “rich uncle” in this scenario and they are trying to figure out how to help without compromising their own financial situation.

It doesn’t matter how you slice it and dice it, this conference won’t deliver a solution. The EU is trying to establish fiscal policies and half of the members are already below the water line. A unanimous agreement is required and weak nations won’t consent to the terms. There is not one politician in Europe or the US that will endorse massive and immediate entitlement reform. This platform would be an act of political suicide so they “kick the can down the road”.

The ECB will let banks pledge a broader range of collateral (lower quality assets) for loans. This means they have run out of good assets. Unlike US banks, European financial institutions did not take massive write-downs in 2009 and their balance sheets are weak. Money Managers have been pulling funds out of Europe at a steady pace and the crisis has reached a boiling point. Market forces took over and European officials had to take action.

Tomorrow, Eurocrats will say all of the right things and they will promise to work on a solution. Then, they will go on holiday. The same thing happened this summer and the market hated the uncertainty.

I’m not concerned with the outcome from these meetings. Europe can decide to print money, ask for contributions to the slush fund, pledge assets, form new credit facility or leverage their current pool of funds. In the end, it doesn’t matter. Entitlement reform needed to be addressed years ago and it was not. They are so far down the road that their actions will merely postpone the inevitable.

The US is only a few years behind the curve. Our mandatory expenses (Social Security, Medicare/Medicaid and interest on our national debt) equal our total tax revenues. That means that all of our discretionary expenses ($1 trillion) will drag us further and further into debt each year. By the way, because of our aging demographics, mandatory expenses will far exceed our tax revenues in coming years.

Japan has the scariest balance sheet of all. If interest rates in Japan rise to 2.5% (currently 1.2%) total tax revenues won’t cover their interest expense. Until recently, they were the second-largest economy in the world.

The universal spike in European interest rates tells me that we are in the endgame. Investors are running scared and they are plowing money into US treasuries. Our deficits are huge and Washington is in gridlock. The economy is sluggish, interest rates are at historic lows and fear is the only explanation for the strength in US treasuries.

Stock valuations are cheap and seasonal strength is pushing the market higher. Asset Managers are praying for a year-end rally so that they have something to show for 2011.

As I’ve been mentioning, the market is living on borrowed time. I believe the “smart money” will sell into strength once the European conference has ended. When stocks can’t rally into year-end, it is a very bearish sign. Look at the price action from December 2007 and then look at what happened to the market in 2008/2009.

I thought that the market would hold up this week, but it looks like the selling pressure is building. A .25% rate cut in Europe and a good initial claims number (381K) could not keep a bid to the market.

If the SPY closes below 125, I am not taking any chances. I will buy back the handful of put spreads I have sold and I will consider buying puts. This is setting up to be a “sell the news” event. The market volatility has been extreme and I will keep my positions small.

The selling pressure is building after two hours of trading. This afternoon, if we make a new low for the day, the selling will intensify into the close. It will signal that the investors are losing confidence and that any decision in Europe won’t have a lasting impact. 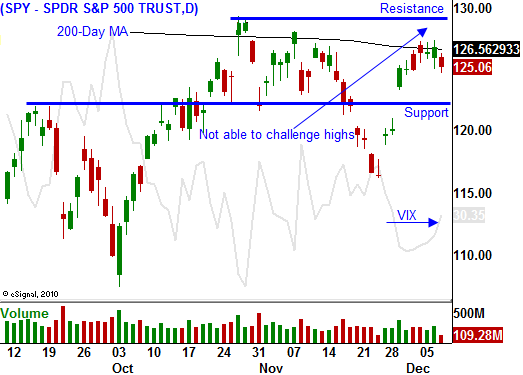